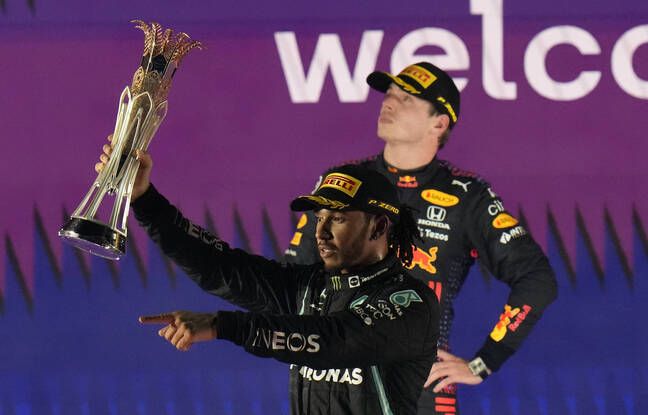 What an end to the season in Formula 1! While there is only one Grand Prix left, next Sunday in Abu Dhabi, Lewis Hamilton (Mercedes) and Max Verstappen (Red Bull) are perfectly tied for the top of the world championship standings. The two men each have 369.5 points after the Briton’s victory over the Dutchman on Sunday at the Saudi Arabian GP, ​​at the end of a completely crazy scenario.

On the Jeddah circuit, the two drivers went head-to-head, with in particular a Verstappen still at the limit. Hamilton seemed to be on a quiet race in the lead until Mick Schumacher (Haas) crashed on lap 10, causing the safety car to enter the track. Hamilton and Bottas stop to change tires, but not Verstappen. Three laps later, the race was interrupted while the safety barriers damaged by Schumacher were repaired.

The strange management of the race director, Michael Masi

The Red Bull driver is in the lead to take the second start. His frustrated rival overtook him at the first turn but the Dutchman managed to regain control by cutting the turn. Frenchman Estan Ocon (Alpine) also took the opportunity to overtake the Briton.

But behind, two crashes occur simultaneously, involving Charles Leclerc and Sergio Pérez on the one hand, George Russell and Nikita Mazepin on the other. New red flag. An astonishing exchange then took place: rather than referring it to the stewards, the race director Michael Masi proposed to Red Bull to return his position directly to Hamilton and therefore to take the third start in third position, behind Ocon and the driver. Mercedes. The Austrian team accepts.

In his turn angry, Verstappen took over the reins with a better start. Hamilton, for his part, logically quickly takes the best of Ocon. The chase is on, but slowed down by a series of virtual security cars due to debris on the track following clashes in the peloton. Finally, on lap 37, the Mercedes driver placed his attack on turn 1, but his opponent retained his position by going out of bounds once again.

He is logically advised to let Hamilton pass to avoid a penalty. Full of vices, the Red Bull driver slows down very hard just in front of his unexpected rival and hangs him from behind at turn 27. The marshals take hold of the incident, which they will only examine. ‘after the race and for which Verstappen will receive a penalty of ten seconds without consequences in the general standings. But they immediately imposed a five-second penalty on the latter for the Turn 1 incident.

Both cars are damaged, Verstappen sees his tires loose, he finally leaves the lead to Hamilton. On the podium, the Briton, who also takes the point of the best lap, shines. His rival, on the contrary, escapes as soon as possible. At a press conference, then, they openly ignore each other.

“I think that lately, we are talking more about the white lines (marking the limits of the track, editor’s note) and penalties and it’s a shame. It is not the F1 with which I grew up ”, loose Verstappen, who feels aggrieved. “We are supposed to stay between the white lines but the rules have not always been clear from the commissioners lately,” Hamilton counterattack.

“I know it, all the riders know it, but apparently it does not apply to everyone here…”, adds the seven-time world champion, clearly referring to his young Dutch rival. The Abu Dhabi meeting promises to be hot.

Thank you, Puerto Rico or the debate on asking for forgiveness

Marriages in Camp Westerbork: ‘They have been cheated’