The political career of long-distance runner Bob Dole reached its goal this Sunday, while he was sleeping, at the age of 98. A hero of World War II, he ran for the vice presidency of the United States in 1976 with Gerald Ford, lost the White House 20 years later to Bill Clinton, served as a Republican senator for a quarter of a century, and bore the mark of the longest-serving leader. of his party until Mitch McConnell surpassed it in 2018. But most of all he was, for almost a century, a pragmatic conservative and an open-minded politician from Kansas. The news of his death was made known by the foundation that bears the name of his second wife, also Republican politician Elizabeth Dole.

For those whose memory does not reach as far as the battlefields of Italy’s liberation, he will forever be the politician who lost at the polls to Bill Clinton in 1996, the time of his re-election as the 42nd president of the United States. It was not just any defeat: Dole gave Clinton the glory of being the first Democrat he managed to repeat in the White House since Franklin Delano Roosevelt, in 1924. The Republican campaign was one of the most clumsy in memory. In his defense, it should be said that it was not his moment: in addition to his mistakes, he lost a victim of the progressive optimism of the nineties and the push of two puppies of the generation of the baby boom, his opponent and his partner on the ballot, Al Gore.

He belonged to another lineage, that which is known as The Greatest Generation in the United States, a country whose elites live anchored in nostalgia for a past in which things were harder, but also simpler. Born in 1923 in the small town of Russell (Kansas), he experienced the Great Depression and the dust storms that pushed the characters of The Grapes of Wrath, by John Steinbeck, to emigrate to the West. The Dole family, the son of a grocer and a housewife, chose to stay on the Great Plains, and the boy ended up enlisting in the army to fight in Europe. He was seriously wounded in Italy in 1945, three weeks before the end of the war, so badly that he was left for dead. Survival took the toll of a permanent disability in his right arm. In return, he received decorations reserved for heroes: three Purple Hearts and two Bronze Stars.

After a painful 39-month recovery, he launched into a career as a legislator in Kansas. He arrived in Washington in 1961 armed with a Midwestern frankness that earned him a reputation as a good negotiator and the respect of his opponents. The major American media today commemorated his figure with the implicit nostalgia of a time when Republicans and Democrats knew how to agree on important things. He served first in the House of Representatives and, for 25 years, in the Senate, where he served as the leader of his party before leaving office to run for election.

In 1996, he was Newt Gingrich’s conservative revolution soldier sent to die on Bill Clinton’s front line. At least, the Republican Party managed in those years to regain the majority of the House of Representatives, which had been in the hands of the Democrats for 40 years. “His defeat [en las elecciones presidenciales] it was also the end of the Gingrich era, ”writes Nick Bryant, a veteran BBC correspondent, in When America Stopped Being Great (When America Left Its Greatness Behind, Bloomsbury, 2021). 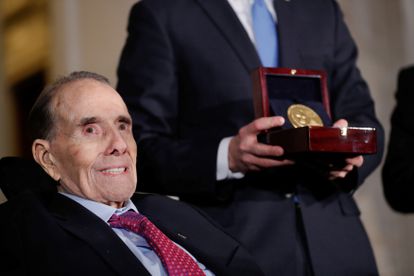 Dole, then a 73-year-old seasoned politician, never again ran for public office. He dedicated himself to working for war veterans, wrote a handful of books, including memoirs of his time as a soldier, and made headlines when he became the only Republican candidate to attend the 2016 party convention in Cleveland in which Donald Trump was appointed. In 2018, he received the Congressional Medal for his services as a “soldier, legislator and statesman.” The following year, the lower house distinguished him as an honorary colonel. In February 2021, he announced that he had advanced-stage lung cancer.

Upon hearing the news of his death, President Joe Biden defined him as “a statesman like few others in the history of the United States. A war hero and one of the greatest of the greatest generation ”. “For me, he was also a friend I could turn to for advice or a joke capable of easing tensions in the most tense moments,” he added. Former President Barack Obama said on Twitter that his political leadership was that of a Republican from another time, when “they followed a certain code, and put the country ahead of the party.” Mike Pence, vice president with Trump, celebrated an extraordinary life “in the service of America.”

DIRECT. Ukrainian crisis: the Pentagon announces a NATO naval exercise in the Mediterranean

Meditation on a transplant