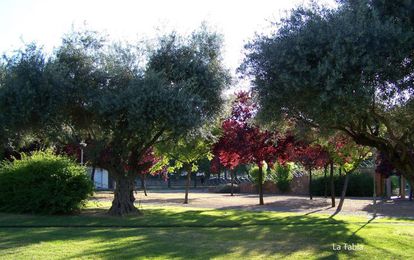 La Granja de Burjassot Park, where the event took place, in an image of the City Council.

A young man of about 16 years, whose identity has not been provided, died this Sunday afternoon after receiving at least one stab during a fight with another young man in a public park in Burjassot, a town about six kilometers from Valencia.

Police sources, who have not specified the origin of the fight, have indicated to Efe that the alleged perpetrator of the fatal wound, who could also be a minor, has not yet been arrested, according to sources in the investigation.

The same sources have indicated that the events took place around 6:30 p.m. on Sunday in La Granja park and that there were several witnesses who alerted 112 that a young man was seriously injured.

A couple who saw what happened explained to the Levante-EMV that both got into an argument with shouts and insults and that they came to blows. At one point, the assailant stuck the knife in his side until he reached his heart and left, throwing the weapon in a trash can and losing his mobile along the way, according to the same information. The victim died shortly. First, it was attended by some young people who were in the park and later by agents of the Local Police and by professionals of the Emergency services without doing anything to save the life of the young man. The National Police has taken over the investigation.