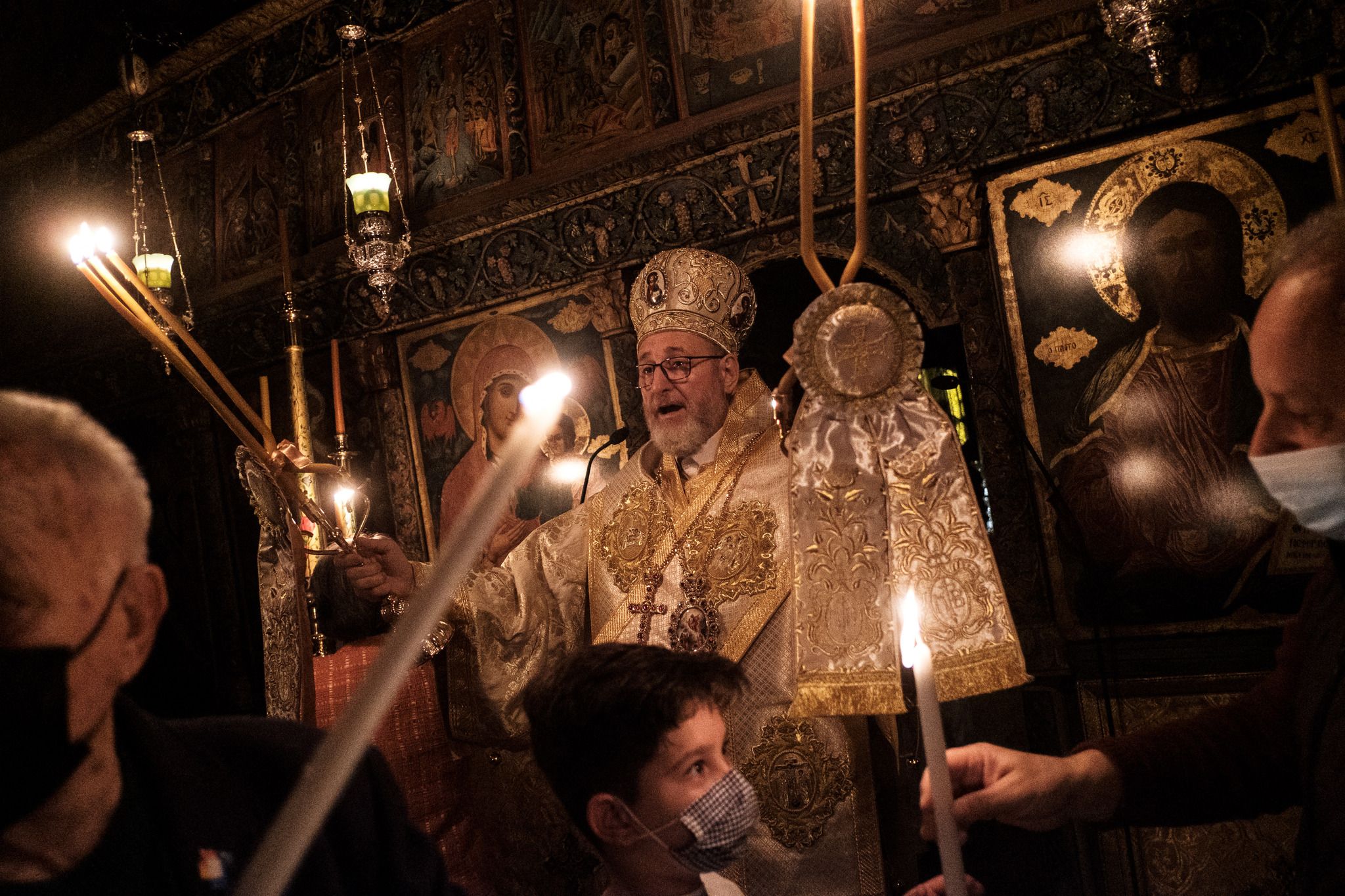 Its primacy over the other religions of the country is confirmed by article 3 of the Constitution of 1975. Written “in the name of the Holy Trinity”, the Greek Constitution thus proclaims “that the dominant religion in Greece is that of the Eastern Church. of Christ ”. This predominance of the Greek Orthodox Church is partly explained by the very important role it played both in the country’s war for independence and during the four centuries of Ottoman occupation. But this era of prerogatives now seems more and more over.

→ THE CONTEXT. The Pope in Cyprus and Greece: the challenges of a trip to the borders of Europe

It was the government of the socialist Andréas Papandréou that kicked off secularization in 1982, by establishing civil marriage. The Primate of Athens at the time, Mgr Séraphin, opposed it violently, but the Prime Minister persisted and signed, excluding two years later the Church from the divorce proceedings to which it had to give its prior consent. .

In 2000, his successor, Costas Simitis, also a convinced socialist and pro-European, removed the reference to religion from identity cards. There too, the battle is more than tough, but Simitis is staying the course despite the anathemas of the religious who have taken to the streets and the demonstrations which mark out the country. It is now forbidden for any public institution to ask for the confession of its citizens, including in police stations or the army. Efstathios, 60, a staunch Catholic, remembers this historic moment: “As soon as we took out our identity cards, we“ the papists ”were looked at askance. I was never able to rise in rank in the army. It was time for it to stop. “

The end of Church tax exemptions

During this unexpected change, it is now possible to take an oath on the Constitution during a trial, and no longer necessarily on the Gospel, the Torah or the Koran. Deputies and ministers will have to wait for the arrival of the radical left party, Syriza, in 2015, to also benefit from this reform.

Report, analysis … The journey of @Pontifex_fr in Greece and Cyprus can be followed on @LaCroix and with our correspondent in the Vatican, @LB2S.

Last act of this decline in the weight of the Orthodox Church on society: the cancellation of any tax exemption during the financial crisis of 2010. The Church, the largest landowner in the country, saw its tax base increase drastically in July 2012, paying for the first time more than 12 million euros in taxes. The Archbishop of Athens Mgr Hyéronyme then tries to highlight “the important charitable work of the Church”, “the income tax that the popes paid like all officials”, and the 96% of his property real estate that the Church has ceded in exchange for these exemptions and salaries of the popes.

The Eurogroup, which closely monitors the country’s finances, refuses to do so. The Church bends, much to the relief of the Greeks who are stricken by the imposed austerity. Frankly, says Irini, professor of history, I would not have understood that the Church is exempt from property tax when I almost lost my house with the new local taxes. Even my mother, who never misses a mass, was in favor. “

Europe, the driving force behind the country’s secularization

This forced secularization took place, according to Stavros Zoumboulakis, “under pressure from Europe”. For this academic specialist in religions and author of the book Christianity of Joy, the testimony of Pope Francis, “it was not possible for Greece to join the European Union with such anachronisms”. “Without Europe,” he insists, “the Greek Orthodox Church would never have accepted such changes. “

All these reforms which reshaped society were mostly well accepted by the Greeks. Including the very latest promoted by the conservative government – yet close to the Church – which concern same-sex marriage, adoption for same-sex couples, cremation of the dead or the abolition of the offense of blasphemy. “It was the height of hypocrisy, cowardly laughing Roula, an architecture student. We spend our time insulting anything and everything, invoking all the saints of the iconostasis, and we could end up in court for blasphemy? It was ridiculous! “

Roula like Irini and an increasingly important part of Greek society, mainly young people, declare themselves to be atheists. However, they will never miss Easter Mass or the Holy Cross festivities in January, when the popes throw a cross into the sea to bless the waters. “It’s part of my identity,” explains Irini. According to the latest polls, 75% of the Greek population continues to marry in church and baptize their children. A figure that falls, however, to less than 10% when it comes to fasting beyond Easter week.

“The Greeks have a very traditionalist, very festive relationship with religion,” emphasizes Pierre Salembier, superior of the Jesuit community in Greece. They will not fail for anything in the world to light a candle during Holy Week, but they are 15% still going to mass. For this chaplain of the French-speaking community of Athens, “Greece is crossed by Western modernity which lowers religious practice”. The numbers speak for themselves. In 2001, 85.6% declared themselves to be practicing, in 2015, this figure rose to 51.9%. A 2015 study by Panteion University in Athens confirms this: 60% of Greeks believe that “the Church has less impact than ten to fifteen years ago”, but they are 44% to estimate religion ” somewhat important ”and 23%“ very important ”.

However, moderates Alexandros Sakélariou, researcher at Panteion University, “there is still no separation of Church and State despite the attempt of Alexis Tsipras and the 55% of the population who supported him on this issue. Awkward in his management of the file, the former prime minister came up against the most conservative currents of the Church. “There was no real consultation with the religious authorities. So when the issue was discussed at the Holy Synod, a majority of bishops spoke out against it. For Stavros Zoumboulakis, this separation largely supported by the Greeks is only a question of time. Especially since the Orthodox Church came out of the Covid crisis very weakened because of its anti-vaccine positions.

“This visit flattens the path towards the unification of Christians”

Archimandrite Ignace Sotiriadis, secretary for external affairs of the Holy Synod of the Church of Greece

“There are issues that separate us, in the realm of dogma, but what unites us is the suffering of the modern world which is losing its faith and worrying about its future.This visit could show that, from now on, we are friends and we visit each other. It’s not like it used to be when we were just blaming each other. This visit flattens the path towards the future unification of Christians. It will be done little by little. We must be in understanding, reconciliation and dialogue. “

The broadcast of 3 December: Conspiracy theorists in court for incitement // Dutch booster policy // Fear of violence in Bosnia

Man flies from Barbados to US with loaded pistol in pocket

Man flies from Barbados to US with loaded pistol in pocket