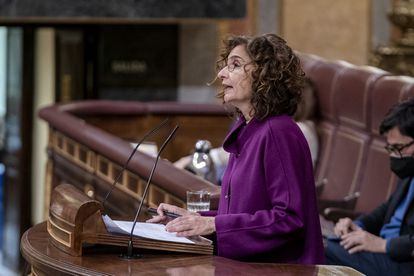 The Treasury has laid the first stone to reform the autonomous financing system. In a document sent this Friday to the communities, the department of María Jesús Montero proposes a revision of the adjusted population criterion that increases the weight of health and educational spending. The reform aims to increase the role of factors other than the total population when distributing funds, but it is far from breaking with the current model. “The document does not propose major changes in terms of new variables. It maintains the bases and tries to improve them with a fine adjustment, to go beyond the population ”, explains Santiago Lago, professor at the University of Vigo.

The regional barons awaited the proposal, since Montero had promised to begin the reform of the autonomous financing system – the current one has expired since 2014 – by changing the calculation of the adjusted population. This variable reflects the spending need of each community and the distribution of funds after weighting the inhabitants according to demographic and geographical factors, which determine the cost of services. Experts agree that the proposal is balanced, but remember that it is only part of the financing system.

Currently, the demographic variables – equivalent protected population, total number of residents, school-age children and over 65 years – are the ones that have more weight compared to geographic factors – surface area, population dispersion, insularity – than larger communities and depopulated like Castilla y León (PP) or Aragón (PSOE) ask to reinforce. The Treasury document proposes modifying the weights of the first group of elements, and proposes corrective measures in the second to take into account depopulation.

The adjusted population criterion currently in force divides residents into seven age groups, each with a different coefficient, to calculate health spending (known as the equivalent protected population). This variable has a weight of 38% of the total, which the Treasury now proposes to raise to between 40% and 45%, going from 7 to 20 groups divided into five-year age groups. “In this way, it is possible to specify much more the real existing health cost by age group,” says the ministry document.

Educational spending would also become more relevant: its weight would rise from 20.5% to a range between 25% and 30%. This is because the Treasury suggests expanding the sample: the current system only takes into account the population from 0 to 16 years old; the ministry now recommends including other stages of studies such as vocational training and university. Specifically, it opts for evaluating the needs of the population from 0 to 17 years old, according to the register and the entry of Higher FP students from other communities, as well as introducing in the variable the population of the register from 18 to 24 years old and the arrival of university students from other autonomies.

The other variable that is reviewed, in order to calculate spending on social services, is the population over 65 years of age. Very aging communities such as Galicia or Asturias have been emphasizing this element for some time. The ministry now proposes dividing this group into two groups – between 65 and 79 years old and over 80 years old -, in addition to including the unemployed without unemployment benefit. The weighting of spending on social services, now 8.5%, would be between 6% and 10%.

Expenditure for the other services provided by the communities will continue to be calculated based on the total registered population, a scheme that benefits more densely populated territories such as Madrid or Catalonia. And that it would lose relevance with the ministry’s proposal, which proposes reducing its weight from the current 30% to scales that range between 18% and 22%, although it would be offset by the change in the other variables.

“You have to wait for the forks to be fixed. Each community will shoot on their own in a game that is zero sum ”, says Diego Martínez López, from the Pablo Olavide University of Seville. “But it is a balanced document, and from a technical point of view the work done is impressive.”

The weight of the geographic variables would remain practically the same —their weighting would go from 3% to between 3% and 4%, and the surface area, insularity and dispersion will remain—, according to the 240-page report that the Treasury has sent to the communities. But it is proposed to introduce a specific variable that measures “the problem faced by communities with more depopulated areas”, which could be, among other formulas, the population necessary for each province to reach average density.

To calculate the dispersion, which would continue to weigh by 0.6%, the ministry advances two possibilities: take into account the singular entity of inhabited population, that is, any habitable area of ​​the municipal term, or inhabited population centers, of at least 10 buildings, which form streets, squares and other urban roads. As a novelty, it is also proposed to incorporate into the adjusted population a corrective linked to fixed costs or economies of scale, which “could affect the seven autonomous communities with the smallest population and which, therefore, have greater difficulties in achieving economies of scale. scale and fixed costs have a bigger impact on them ”.

“It is a continuation proposal, in line with the recommendations of the 2017 expert commission, with some small innovation and that leaves room for political discussion. It seems reasonable, ”says Ángel de la Fuente, Fedea researcher and one of the leading experts in regional financing. “But this does not fix the financing model. I still see the reform very far ”, ditch.