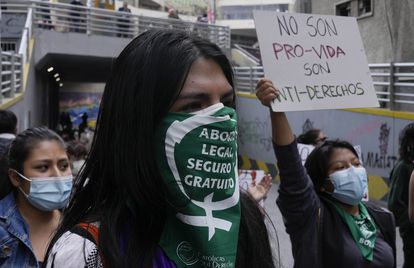 A woman wears a protective face mask with a message that reads in Spanish; “Legal abortion safe and free” during an abortion rights demonstration, outside the offices of the Bolivian Episcopal Conference, in La Paz, Bolivia, Friday, Oct. 29, 2021. The case of an 11-year-old girl raped and five months pregnant, who is in a reception center of the Catholic Church, has rekindled the debate on abortion in Bolivia. (AP Photo/Juan Karita)Juan Karita (AP)

The ordeal of an 11-year-old girl who became pregnant after repeated rapes by a relative has given visibility, albeit fleetingly, to the enormous obstacles that stand in the way of access to legal abortion in Bolivia.

After weeks of disseminating the case in the local media and thanks to the intervention of the Ombudsman’s Office, the girl was finally able to terminate her pregnancy on November 6. Since then, the subject has disappeared from public discussion, as if it had been an exceptional case.

Women and girls in Bolivia suffer alarming rates of sexual violence. If they become pregnant as a result of rape, the law recognizes their right to abort. Bolivian law provides for legal abortion in cases where the pregnancy is the result of rape or incest, or when it is necessary to protect the life or health of the pregnant person. However, women and girls who try to obtain legal abortions in such circumstances frequently suffer stigma, mistreatment and re-victimization. Public institutions are drastically failing to provide them with the support they need.

Data from a 2020 study by the Ombudsman’s Office show profound flaws in the protection of sexual and reproductive rights: 90% of the health personnel interviewed in 44 public hospitals did not know the circumstances in which it is legal to perform an abortion in Bolivia . The study also identified other obstacles to accessing abortion, including a lack of adequate facilities and medications. Furthermore, health personnel often incorrectly demand that women and girls must first obtain a court order, which Bolivian law does not provide.

The Ombudsman’s Office has also denounced that health personnel try to dissuade women and girls from interrupting their pregnancy. Denying or delaying access to safe abortion or forcing a person to carry on with a pregnancy against their will are acts of discrimination and gender-based violence, and may constitute torture according to international standards.

The journey lived by the 11-year-old girl exemplifies the deep suffering and re-victimization that these obstacles can generate.

Initially, the girl felt “movements in her belly that scared her” and told a cousin about it, according to official records analyzed by Human Rights Watch. In her first psychological evaluation she said, crying: “I don’t want to be pregnant, I want to study.”

On October 22, she was taken to a hospital in the city of Santa Cruz, where doctors gave her a dose of mifepristone, a drug used to terminate pregnancy, according to records. However, the next day, the girl’s mother told the Ombudsman’s Office that, after a visit by representatives of the Catholic Church, the girl had decided to go ahead with the pregnancy.

In a medical meeting attended by representatives of the Church, but not the girl or her mother, the health personnel decided to suspend the abortion, according to the ombudsman.

When analyzing the girl’s apparent decision to continue with the pregnancy, a second psychological report, dated October 25, indicated that “she was influenced by directed opinions” and that the type of language and words she had used in the interview “did not they are her own ”. The girl repeated for the psychologist the appalling description of the abortion that the ecclesiastical representatives had made and said: “That scared me.” After her visit, she signed a statement stating that she wanted to go ahead with the pregnancy. “They made us sign I don’t know what,” he told the psychologist. “I did not say anything”.

The hospital released the girl to be taken to a Catholic shelter on October 26. On November 2, in response to a legal action by the Ombudsman’s Office, a court in La Paz ordered that she be removed from the shelter and that a medical team evaluate her situation. Back at a hospital, doctors finally performed a safe abortion on her, with her consent and the support of her mother. If no one had intervened on her behalf, she would probably still be in the shelter, forced to carry on with an unwanted pregnancy that could endanger her life.

Sadly, this girl’s case is no exception.

Between January and April 2021, the Public Ministry received complaints of more than a thousand cases of rape of boys and girls. It is very likely that the figure is higher, since many cases are not reported.

The international non-governmental organization Ipas estimates that almost 60,000 Bolivian girls and women had illegal abortions in 2016, the most recent estimated figures, while official data shows that hospitals performed only 62 legal abortions that year. That indicates that obstacles are forcing women and girls to obtain abortions outside of the health system, with potentially lethal consequences. Unsafe abortion is the third most common cause of maternal mortality in Bolivia.

The Bolivian government has asked that those who violate the girl’s rights, including public officials, be punished. There is no doubt that the case merits a thorough investigation.

But that is not enough.

The Government must take steps to decriminalize abortion and ensure that the health system is prepared to provide comprehensive sexual and reproductive health care, including safe abortions. At a minimum, it should guarantee access to legal abortion in accordance with current law without discrimination, stigma, undue influence or unnecessary delay.

No one should have to live a nightmare to end a pregnancy.

César Muñoz Acebes is a Senior Researcher for the Americas at Human Rights Watch.