Tension grows between William of England and the BBC, now because of ‘The Crown’

Everything is reeling in the grounds of Buckingham Palace. Even the one that has always been one of the most unbreakable ties of the monarchical institution in recent decades: the one maintained by the royal house and the British public channel, the BBC. If for years the loyalty to the crown by the British Broadcasting Corporation has been total, now that union seems to be more in keeping with the sign of the times. The different points of view on the monarchy and the lack of submission to which the corporation has always been subjected are the order of the day, but also, therefore, criticism from the institution to which it has always been a faithful companion. .

Now a new episode of tension between the Windsors and their hitherto appreciated public network has come to light. Specifically, the protagonist is Prince William of England. The eldest son of Charles of England and second in line to the British throne has expressed dissatisfaction. As reported by the British newspaper The Telegraph, the Duke of Cambridge is “frustrated” with the station’s attitude due to a very specific fact: that it has allowed Netflix, and specifically the series The Crown, shoot at their facilities to recreate the famous (and not without controversy) interview that his mother, Diana of Wales, gave to the program Panorama in 1995; So popular was that television appointment that it was chosen, in 2007, as the best in the history of the chain. At the BBC’s headquarters, the so-called New Broadcasting House in London, the content platform has shot several scenes in which the actor Richard Cordery plays the then president of the corporation, Marmaduke Hussey. The chain has confirmed to Telegraph who has given Netflix permission to shoot those scenes.

This months, The Crown —The popular Netflix series that reflects the life of the Windsors since the 1940s — rolls its fifth season, where it will reflect what happened within the royal family during the 1990s, including the last years of life and death, in 1997, from Princess Diana. Diana’s interview in Panorama It is one of the milestones of those years; Not in vain did one of the phrases she pronounced in it go down in history in reference to the love story of her husband, Carlos, with Camilla-Parker Bowles: “There were three of us in that marriage. It was a bit overcrowded. ” However, Lady Di’s son is now angry that the BBC cooperates with Netflix to “market” it, because he has always opposed what it meant to the princess.

Guillermo, 39, made public last May how difficult that interview was for him, which he considered “without legitimacy and that it should never be reissued.” For the prince it was a source of “indescribable sadness” because that talk with journalist Martin Bashir that 23 million people saw “contributed significantly to the fear, paranoia and isolation” of Princess Diana in her later years. Guillermo accused the “failures” of the high command of the chain and assured that his mother had been defrauded “not only by a rogue reporter, but by the leaders of the BBC”. In fact, a couple of months after the interview aired it emerged that Marmaduke Hussey had not even been informed that the network was going to interview the princess. 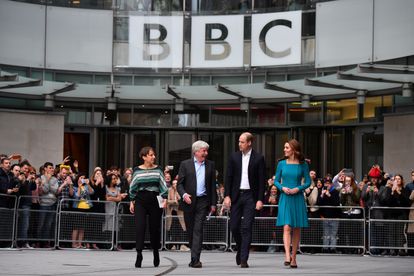 Guillermo’s frustration and anger that the BBC continues to exploit that content more than 25 years later is better understood by the events known in November 2020, when a documentary explained that Bashir mounted a whole plot of lies and blackmail seasoned with false documents to convince the princess to give him the interview. After six months and an internal investigation, the BBC took a step forward and apologized publicly (to the viewers and Guillermo and Enrique) for all that and for not complying with “its high standards of integrity and transparency”.

All this adds to another bitter controversy that took place just a couple of weeks ago between the royal house and the BBC, which at the end of November aired the first part of a documentary called The Princes and the Press (“The princes and the press”) in which he dealt with the relationship between William and Henry with the British tabloid press. A content directed and conducted by journalist Amol Rajan, a confessed republican who has described the monarchy as something “absurd”. From the palace, the chain was asked to review the documentary beforehand, but it refused, which caused friction between the two.

The annoyance on the part of the royal family was such that Buckingham Palace, Clarence House and Kensington (i.e. the Queen, Charles and William) issued a very rare joint statement which the BBC decided to reproduce at the end of the first episode: “ A free, responsible and open press is vitally important for a healthy democracy. However, too often, inflated and unsubstantiated claims are presented as fact by anonymous sources. And it is disappointing when anyone, including the BBC, gives them credibility. ” What has not been, after the emission of the second and last chapter this week, has been a legal response on the part of the palatial lawyers. The rope between the BBC and the British monarchy is tighter than ever, but it does not appear to have been completely broken for now.

Trauma and aftermath of a childhood marked by war in Ukraine

Weather in Tlajomulco de Zúñiga today: the forecast for Monday, May 23, 2022

“At the Davos Economic Forum, there will be a lot of talk about geopolitics, since it is now what sets the course”