Rule of law: European justice called to reject the appeal of Poland and Hungary 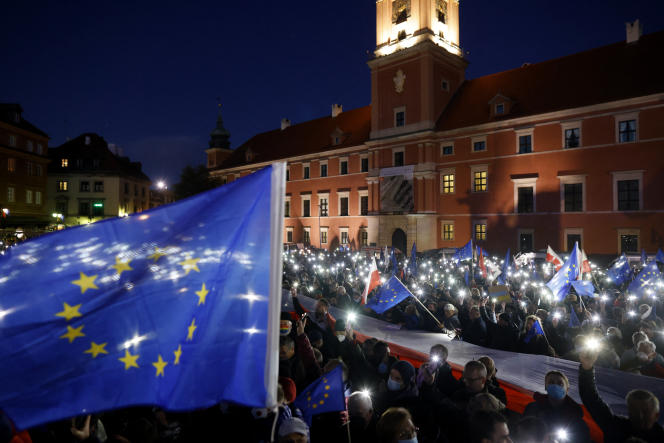 The European Commission should soon be able to use the mechanism of conditionality of the payment of Community funds to respect for the rule of law. The Advocate General of the Court of Justice of the European Union (CJEU) indeed recommended, Thursday, December 2, that the judges of Luxembourg reject the actions for annulment brought by Hungary and Poland against this regulation. Its conclusions are certainly not binding but, most of the time, they are followed by the Court, which should now rule shortly.

Read also Article reserved for our subscribers In Hungary, where he faces a united opposition, Viktor Orban launches his campaign by targeting “Brussels”

During the negotiations between the Twenty-Seven on the European recovery plan, in 2020, several member states of northern Europe for the most part, the Netherlands in the lead, as well as the European Parliament, had made this mechanism a sine qua non. They demanded that it be possible to block the payment of aid – and more generally of all Community funds – to a country whose failures in the rule of law would threaten the proper use of European money. There was no question of accepting that a common debt be issued to finance this huge financial package if, in return, they did not obtain guarantees on this subject.

Warsaw and Budapest eventually gave in in December 2020, but it was then agreed that if they were to challenge the legality of the mechanism in the EU Court of Justice, the Commission would wait for the outcome of the proceedings before there. to have recourse, and that it would take into account, if necessary, any remarks of the judges of Luxembourg. In March, the governments of Mateusz Morawiecki and Viktor Orban therefore, as planned, appealed for the annulment of the text, whose legality and compliance with treaties they contested.

The conditionality mechanism “has been adopted on an adequate legal basis, it is compatible with [les traités] and respects the principle of legal certainty, ”said the Advocate General of the CJEU on Thursday. Manuel Campos Sanchez-Bordona underlined that the regulation “does not apply to all violations of the rule of law, but only to those which have a direct link with budget execution”. In this case, it requires an independent justice – this is no longer the case in Poland – or the existence of a sufficient arsenal to fight effectively against corruption, which is not found in Hungary.

You have 48.7% of this article to read. The rest is for subscribers only.