The absolute leader of the emojis in 2021 it has been the one of tears of joy, an image that has monopolized 5% of the total of the emoticons sent by WhatsApp and other messaging systems around the world. It is not the first time, in 2019 it was also crowned as the reigning emotion. Just behind it is the red heart, a symbol that helps us to express all the possible emotions related to love, friendship and gratitude. The data has been released by the Unicode Consortium, the non-profit organization that is responsible for coordinating the development of Unicode (the standard for character encoding). According to this body, 92% of the world population that uses the internet uses emoticons in their conversations in the digital environment.

The list of the most popular emoticons in the world is very similar to that of 2019 – the last time their use was analyzed – although then the pandemic had not yet made a dent in our interactions on the network. Some fluctuations in the use of various emojis They are probably random, like the meteoric rise of the parrot, the duck or the clock that strikes half past one, but in others the reflection of the changes that we have undergone during the last two years can be guessed.

One of the emoticons that has spread the most is the shopping cart, with an admirable position of 196 out of the 1,545 that Unicode analyzes, well above the almost 800th position it obtained in 2019. Could it be due to inflation and the crisis global supply? Most likely, it is not by chance that this oscillation has coincided with the stockpiling of products linked to the confinements (both individually and collectively) that have occurred throughout the world since 2020, although this has not been the case. from Spain for a long time. Perhaps, for the same reason, the emoticon of the houses has also greatly increased (because how much time have we spent in them?).

If the emoticons related to the hands are excluded, the one with the arm flexed as a sign of strength is the most popular among those that refer to parts of the body. As Unicode indicates, it is used not only to reflect that a fight has been overcome, for example, but also to show that the arm is ready to receive the vaccine. Although, perhaps, that interpretation is the result of spinning too fine.

What would be surprising is that the emoji the green microbe would not have ascended meteorically. It has done so, and is ranked 477 compared to what it had in 2019, almost 1,200. The syringe is at 193 and the pill at 428, although use of the former has not increased much since 2019 and that of the pill has even decreased. Nor has the emoji of the person wearing a surgical mask. It has grown, although not as much as one would expect because it was already shared a lot.

Others that have presented a very notable popularization are that of the cupcake and that of the cake, precisely linked to one of the most famous activities during the pandemic: home baking.

However, Unicode’s interpretation of the results obtained is that, although the global pandemic has changed the way we live, it has had little effect on the way we express ourselves in the digital environment. For this reason, the 100 most used emoticons are the usual ones: facial expressions, but the aforementioned oscillations can be a true reflection of the activities that we have carried out the most during the last two years.

Behind the tears of joy and the red heart, which lead the ranking with a huge advantage, are eight optimistic emoticons: the one with the tears of joy inclined, the thumbs up, the hands as a sign of thanks (or high-fiving one? with another ?, the debate has not yet been resolved), the kiss, the face surrounded by hearts, the loving eyes and the flushed smile. The only exception between the top ten It is the disconsolate crying, although it can also be used to express emotion or gratitude. 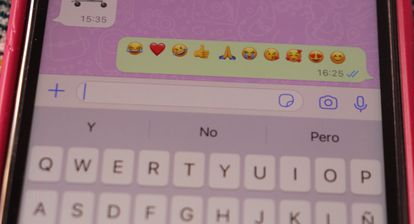 The 10 most used emoticons in 2021, according to Unicode.CLARA REBOLLO

The leap made by the symbol of the switched off mobile, which has risen more than 600 positions since 2019, and the kiss between a man and a woman, which has done so in about 700 positions, is surprising, similar to the evolution of men and women with a heart between them.

And what about the least used? Of the 1,545, the last positions are held by dozens of flags and some combinations of families, such as the man with two girls or the two women with two boys. Last of all is the flag of the French island region of Martinique. Ahead of her, numerous flags of other small archipelagos. Of course, the steepest slopes have been recorded by various arrow symbols in different positions, the world map, the symbol of the ―figurative― speech bubble of anger and the small white square, one of those emojis that each one uses as their intuition dictates.

Of the profession emoticons, the least shared, and by far – about 100 positions below the one that precedes it – is that of the factory worker. He is overcome by the factory worker woman, the judge and the mechanic. At the head of the offices is the policeman. If analyzed using the Unicode thematic classification, the pregnant woman and the princess would lead the catalog.

What may not come as a surprise is that the most shared flag has been the red one, which has starred in numerous publications on social networks in recent months under the slogan red flag, to refer to the aspects that one would not tolerate in a potential romantic partner. Behind her, and at a prudent distance from the rest, is the American and, in third place, that of the LGTBI collective.

Emoticons and emojis They are not strictly synonymous words, although they are used interchangeably. The second are small colored figures with symbolic value and the first are symbols created with punctuation marks, more typical of the first stage of the Internet.