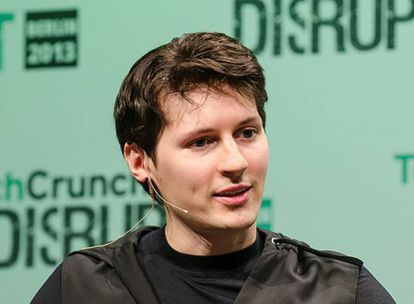 One of the largest social networks in the world, Vkontakte (VK), is already in the hands of a state. The government of Vladimir Putin has used its most powerful economic arm, the gas company Gazprom, to take over the Russian alternative to Facebook and a possible rival (or substitute) in the future of YouTube. In addition, the acquisition coincides with a new offensive by the Kremlin on these western platforms in which the opposition has had a voice in recent years: the authorities have announced the opening of new criminal cases against Google and Meta (formerly Facebook) for which they could be sentenced to pay up to 10% of their total income.

Vkontakte has always been a key target for the Kremlin to position itself on the internet. Founded in 2006 by the current owner of Telegram, Pável Dúrov, it quickly conquered its national market and today is used by some 47 million Russians daily, according to company data. However, that enormous success turned against Durov himself. Critical of the government, his offices were raided and he was removed from the public scene a few months after being accused of having run over a police officer. Finally, and after the departure of two partners who sold their shares to a director of the oil company Rosneft, also in the orbit of the Government, Dúrov sold his shares in 2014 to the holding USM, owned by Alisher Usmanov, an ally of Vladimir Putin and one of the richest men in Russia, also owner of Russian technology Mail.Ru.

With this sale the circle is closed and Vkontakte is directly in the hands of the state monopoly with which Putin controls the gas that reaches Europe. The maneuver has been carried out through two operations and apart from VK it also includes another popular social platform, Odnoklassniki. On the one hand, USM has sold the 45% it controlled in MF Technologies, VK’s parent company, to Sogaz, Gazprom’s insurance subsidiary. On the other hand, the gas company’s investment fund, Gazprombank, has increased its stake in MF from 36% to 45% and has transferred it to Gazprom Media. This complicated financial spider web hides a very simple final result: Gazprom now controls more than 50% of the votes in the VK council, an absolute majority to make strategic decisions, such as promoting the video platform, which will be accessible from now on without being registered.

“VKontakte was already the most dangerous network for Russian users, and now it is a little more dangerous,” says Mikhail Klimarev, director of the Society for Internet Protection. “For example, of the 1,300 criminal proceedings for comments on the Internet that our organization has investigated, 90% took place in VK,” adds the activist. However, the control of its contents is not the only reason that could be behind this “nationalization”, which curiously takes place two decades after Gazprom itself acquired the largest independent television in the country, NTV, through judicial processes.

“Gazprom doesn’t care about channels, it’s just Putin’s wallet. Gazprom Media already controls all television in Russia, and now the focus is turning to the internet. This potentially solves the YouTube substitution, ”says Klimarev. The gas company has invested a lot of money in the failed RuTube in recent years, and VK would be the next attempt to replace the US-owned video platform owned by Google. “Yes, this is part of the strategy. You can’t just block YouTube, there would be a lot of dissatisfied people; but if you provide an alternative to the users then they can assimilate it. Or at least that is what our political leaders think ”, says the expert.

All the Russian press points out that the new CEO of VK will be Vladimir Kiriyenko, until now vice president of the state-owned Rostelecom and son of the first deputy head of the Presidential Administration Directorate Sergei Kiriyenko. According to several sources told the RBK media, “he had been promised the presidency of Rostelecom, but he had already remained too long as a second sword.”

YouTube, as well as Twitter or Facebook, is in the eye of the hurricane for having served as a space for the opposition. Following protests over the arrest of opposition leader Alexéi Navalni in January, threats of closure and fines have been continuous on these platforms, which the authorities have demanded to erase all traces of opposition content, declared “extremist” by Russian judges. .

In fact, on the same day that the sale of VK became known, the Russian telecommunications agency, Roskomnadzor, announced that it had brought Meta and Google, owners of Facebook and YouTube, respectively, to court “for continuously failing in the removal of content, ”which exposes them to a fine of between 5% and 10% of their total income in the last year, according to a law recently passed by the Kremlin. The trial will be held on December 24.

One of the applications that used its own VPN until last year was precisely the Telegram messaging service, founded by Dúrov after leaving Vkontakte and which was banned in the country for years for not giving intelligence services access and decrypting their chats. After a long fight with Moscow in which the application worked at times despite blocking attempts, Dúrov twisted his arm after the ruinous and failed launch of a cryptocurrency in the US. Thus, in the summer of 2020 he reconciled with the authorities and these allowed the activity of Telegram in exchange for giving access to the FSB – Russia’s main security service – in their investigations.

Curiosities of fate, Telegram, which was launched by Dúrov as a challenge against the state Big Brother is now being touted in Russia as a “safe alternative” to WhatsApp and other American messaging services. In fact, unlike Mark Zuckerberg’s application, this application has been partially “nationalized”: last March, the sovereign wealth funds of the United Arab Emirates, Abu Dhabi and Russia participated in an issuance of a thousand dollars in bonds convertible into shares within five years. Dúrov, who in 2013 offered a job to Edward Snowden “to work on the protection of the data of millions of users”, celebrated in 2021 the entry into the shareholding of his company of “the largest and most experienced investors in the world”, the petro-states.

Las Bambas: MMG announced that it will suspend operations in Peru due to the blocking of the mining corridor