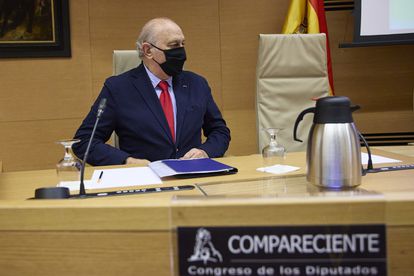 Eugenio Pino, Chief of Police with the Government of Mariano Rajoy and alleged muñidor of the patriotic police, he expressly obtained the Silver Medal for Police Merit, with which he was awarded by the Executive of the PP and which carries an annual lifetime bonus of more than 3,000 euros. According to the documentation incorporated into the parliamentary commission on the caso KitchenOnly 21 days passed since the then Minister of the Interior, Jorge Fernández Díaz, ordered “to process it as quickly as possible” until he himself approved it. The ex number one The body’s operative is being prosecuted for the espionage plot against the popular ex-treasurer Luis Bárcenas, as well as the former politician.

The Interior papers, to which EL PAÍS had access, begin with a letter sent on May 12, 2016 by Fernández Díaz’s chief of staff to Ignacio Cosidó, then Director General of the Police. The letter reads exactly like this: “Following direct instructions from the minister, I ask you to process as quickly as possible the award of the Silver Medal for Police Merit to the Deputy Director of Operations, Chief Commissioner Eugenio Pino, on the occasion of his forthcoming retirement. ”.

The document enters through registration on May 20. Three days later, Cosidó orders to instruct the appropriate summary to grant the distinction for the “meritorious career” of Pino, “who has excelled in the fulfillment of the duties of his position, directing the performance of outstanding services that have resulted in prestige for the corporation”. That same day, in just one hour, the file is opened and closed: “Since it is evident that he has carried out the position of Deputy Director of Operations in a relevant way, it is considered that the practice of proceedings is not necessary.” For this reason, it is approved to give the Medal for the “brilliant professional career” of the head of the Corps: “His total dedication to service has been shown.”

On June 1, the Governing Board of the General Police Directorate is consulted, which does not object to the distinction. On the 2nd, Cosidó sent a letter to the minister himself informing that the file had already been processed. And that same day, Fernández Díaz signs the order to award the medal.

The ERC spokeswoman in the parliamentary committee on Kitchen, Pilar Vallugera, asked Fernández Díaz on the matter this Thursday: “Your request was very quick. Who proposed it? The former minister then responded with another question: “Who proposed it?” “You!”, Has sentenced the Republican. “Well, it will be true,” added the former popular leader, who has riveted: “If I have no evidence against it, a man like Chief Commissioner Pino, who has served for almost 40 years in the Police and they inform me that, when retire, propose … It seems reasonable to me “

—And the process as quickly as possible? Vallugera has insisted.

“Of the procedures … that …” the former minister has eluded to answer.