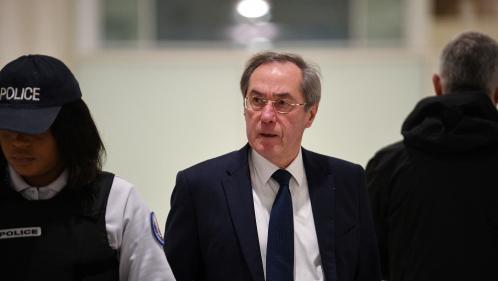 The National Financial Prosecutor’s Office (PNF) revised upwards its requisitions, Friday, December 3, against the former secretary general of the presidency Claude Guéant in the case of the Elysee polls, asking for a year of imprisonment and 10 000 euros fine. More than three weeks after the end of the trial of five former advisers and collaborators of Nicolas Sarkozy, the Paris criminal court reopened the proceedings after the communication, by the PNF, of new documents concerning Claude Guéant.

On November 10, the public prosecutor requested one year in prison, including six months, as well as a fine of 10,000 euros, against the 76-year-old defendant for favoritism and embezzlement of public funds through negligence. On Friday, the 32nd correctional chamber examined during a short hearing two judgments of the Paris Court of Appeal, delivered on November 9, as well as an investigation report, of which the court was not aware during the trial.

These documents concern the modalities of application of a previous conviction of the ex-grand clerk of the State. In the case of the cash bonuses of the Ministry of the Interior, Claude Guéant was imposed in January 2017 on appeal two years of imprisonment, including one year suspended probation, as well as a 75,000 euros fine, for complicity in embezzlement of public funds and concealment.

He was also ordered to pay, jointly and severally with four other defendants, 210,000 euros in damages to the State. On November 9, the sentencing chamber of the court of appeal revoked part of Claude Guéant’s suspension and part of his parole because it considered that he was not making the necessary payments.

“Mr. Guéant does not respect the court decisions which concern him” and “he does everything possible not to have to execute them”, launched the financial prosecutor. Denouncing a “speech of victimization” on the part of the defendant, which “borders on contempt” for these two recent court decisions, he described his behavior as “unworthy of a former director general of the national police, of a former Minister of the Interior, a former secretary general of the Elysee “.

“I show no contempt for court decisions,” protested Claude Guéant at the helm. “I didn’t pay for a simple reason: I can’t do more!” He got carried away. Earlier, he assured: “I have done all I can and I am doing all I can to pay off my debt.”

Phones of Finnish diplomats were infected with Pegasus spy software