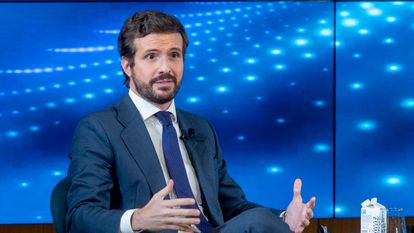 The president of the PP, Pablo Casado, during a ceremony in Madrid, last Tuesday, Alberto Ortega (Europa Press)

The leader of the PP, Pablo Casado, charged this Friday against the Government for the statements of Vice President Yolanda Díaz in which she assured that her fellow cabinet members called her an “alarmist” when she promoted a guide to the first signs of covid 19 in February 2020, days before the pandemic broke out and the state of alarm was decreed. Married, who is traveling in Cyprus, has demanded a parliamentary inquiry commission to find out what he has described as “negligence” and has warned that, in the event that this initiative does not go ahead, he is willing to ask the Prosecutor’s Office acting ex officio. Díaz, who has appeared after an extraordinary meeting of the Council of Ministers, has called the commotion generated by his words an “artificial controversy”. The Minister Spokesperson, Isabel Rodríguez, has pointed out that “they have always acted to protect the health of Spaniards”, and has emphasized that the Executive’s action was carried out “in the hands of the experts” and “of science.”

Casado has defended that Congress should open an investigative commission to clarify whether the Government “hid” the pandemic despite “knowing the importance of infections” so as “not to end the demonstrations scheduled for March 8”. The leader of the PP has explained that they have asked to reactivate the investigation commission on the first wave of the coronavirus – the Popular Group already requested it months ago, but did not get support. That said, he has warned that if it is not allowed to investigate in parliament, his party will request that “the Public Prosecutor’s Office open proceedings against public officials who have been able to hide information.” The leader of the PP has appeared before the media after meeting in Larnaca with the President of the Republic of Cyprus, Nikos Anastasiadis.

The national leadership of the PP considers that the minister’s statements are “extremely serious” and believe that it should be investigated because if the Executive of Pedro Sánchez knew the seriousness of the situation, it put the population at risk. For now, he has already requested the appearances in Congress of Yolanda Díaz and the Minister of the Presidency, Félix Bolaños, reports Europa Press.

The second vice president of the Government, Yolanda Díaz, has accused the PP of encouraging a “great artificial controversy” as a result of her words about the anticipation of the pandemic when it had not yet broken out in Spain, as she did with the feminist demonstration of 8- M of 2020.

Díaz recalled that the PP had already requested his appearance and that of the former first vice president, Carmen Calvo, for the massive 8-M demonstration on the eve of the first restrictions due to the pandemic, to point out that it ended up withdrawing that requirement. And she has stressed that now “she is doing the same” trying to create a “great artificial controversy” around the statements she made in an interview on Radiocable.

Regarding this same matter, Isabel Rodríguez, Minister spokesperson for the Executive, has stressed that the Government’s response against the pandemic has always been adjusted to science and that they are very “proud” of the management they carried out. Rodríguez, who was not part of the Executive at the beginning of the pandemic, has defended the Cabinet’s management. “As I was not there then, perhaps I can tell you more emphatically what the Government did, which was to be at the forefront of our country and respond through the criteria of science and health authorities,” he responded to journalists. .

The government has publicly avoided showing any type of internal tension between Díaz and the socialist sector. The vice president has not rectified her words of the previous day or admitted that they were a mistake, but she has made clear a message that goes along the lines of supporting the Executive’s management. “On November 8, the WHO [Organización Mundial de la Salud] has put Spain as an example of pandemic management. We have been exemplary in managing the pandemic despite not having any support. I take the example that my country is in the management of the pandemic and vaccination ”, he declared. Along the same lines, the spokesperson Rodríguez has also appealed to the WHO: “I want to show the pride of the country because the WHO recognizes Spain as a leader in vaccination. We have managed the best of the pandemic thanks to everyone’s efforts. This is not a merit of the Government but of the country. All administrations responded loyally. The only one who failed in the middle of the pandemic is Pablo Casado, who has no trace of a state person. Married should not contradict the WHO; Spain can boast of having done a good management ”, he concluded.