We won’t teach anyone who has watched a biathlon or cross-country ski race in their life: waxing skis is an essential part of athlete performance. There like that, we remember for example Martin Fourcade, 14th in a mass-start at Nove Mesto at the beginning of 2020 after having hit 15 terminals literally stuck to the snow, while he was fighting with Johannes Boe for the Big Globe. . “I felt helpless, I was not fighting with the same weapons as the others,” pleaded the Frenchman on arrival.

Wax is this product applied under the sole of the skis to allow it to slide better. In each team, specialized technicians are in charge. They prepare the skis according to the type of snow and the weather conditions, according to a recipe that belongs to them. But this season, the situation has changed. You have to do without the ingredient that is at the base of everything, fluorine.

No machine, no testing … No testing, no ban

To be more precise, it is still tolerated, but at a very low rate. Because the fluoride contained in waxes is poisonous for health and the environment, as proved by an edifying survey by L’Equipe Explore published in November. Scientists and doctors did not wait for this publication to realize it, nor the International Ski Federation (FIS), for that matter, which was considering banning fluoride waxes at the dawn of the 2020-2021 season. Decision postponed for one year… then for another. We will have to wait at least for the 2022-2023 fiscal year to see the fluoride completely disappear from the circuit.

The reason is simple. There is currently no machine for testing. “The development took a lot more time, concedes Pierre Mignerey, the director of cross-country skiing at the FIS. In fact, the technology is there. Today, it is possible to detect the presence of fluoride on a ski sole. But there are still portability and speed issues to be resolved. The existing machines are indeed very large, and they must be able to be easily transported to the competition venues. Also, it still takes too long to take the measurements. A test requires a hundred measurements per point, with three different points to analyze on the ski. We let you imagine the time it would take to control the hundreds of competitors at the start of a biathlon sprint.

Tests before departure or nothing

The goal of the FIS is to develop a kind of small infrared gun that would send data directly to a computer. All of this should not take more than 30 seconds per ski. “If more is needed, that will mean that we cannot do the tests before the start, but after the race,” says Pierre Mignerey. This would pose two problems: a clean ski may have been contaminated by passing through the trail of a fluoride waxed ski, and the penalties could only be taken after the fact, which is never good news for the ski resort. sports fairness.

“We need a result immediately on the ground, otherwise we will enter into a problem similar to that of anti-doping,” said our leader. A device, developed by a German company, is currently in the testing phase. A first battery had already been put in place last winter, but the results were not reliable enough while the experiment was carried out in the laboratory. Suffice to say that we were far from achieving something satisfactory outdoors. 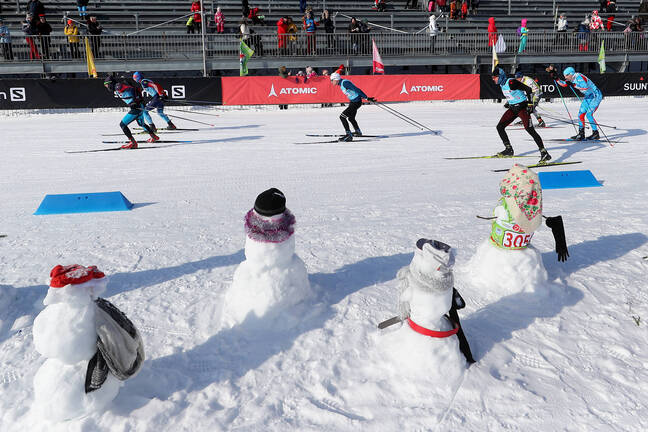 The FIS working group on the subject organizes a meeting every two weeks to inform about the progress of the worksite. Pierre Mignerey:

The idea is to be ready as quickly as possible, before the end of winter, so that we can carry out field tests and introduce them officially from next July. We are hopeful, but at this stage we cannot commit to anything. “

In the meantime, it is therefore the European directive on the prohibition of perfluorooctanoic acids (PFOA or C8 of their small name), which entered into force last July, which prevails. The teams had to get rid of all waxing products that no longer met standards this summer – around 90% of them. Obviously, everyone is looking at each other a little askance at the start of the season. Even if substitute products, not necessarily less efficient, have already been found, what says that the neighbor does not use a prohibited powder?

How effective are the controls this season?

All national federations have been asked to sign a letter in which they ensure that they are aware of the existence of the new regulations. Unlike cross-country skiing, which apparently thought enough was enough, biathlon set out to control the presence of these products randomly in the teams’ waxing cabins. You don’t have to be called Lance Armstrong to see its limits. Storage is always possible elsewhere …

Checked last week, the head waxer of the Norwegian delegation, Tobias Dahl Fenre, took the liberty of sending a letter to the IBU to tell them what he thought. Spoiler, not that good. “Only one product has been tested, I would have liked us to ask to see everything we had,” he said in the journal NRK Nordland. Because otherwise, it will be very easy to hide things. “

IBU response? “The system is not perfect, but it is as good as it gets now,” said manager Felix Bitterling. It’s always better than doing nothing. A meeting is scheduled this weekend between the International Federation and those in charge of the waxing cells to discuss possible improvements.

The general opinion is that the technicians of the national selections have better things to do anyway than sneak a few grams of PFOA. Rather, it is the non-fluorinated arms race that is currently being played out, to be fully prepared when the total ban falls. With a question. “For now, with fluorine, we have implemented protocols that allow you to protect yourself well. Tomorrow, on no-fluorine, with other products, will we be able to do it? poses Grégoire Deschamps, the technicians manager of the France team, in an article from RMC. There will inevitably be a molecule that will replace it … Will it be less harmful or more harmful? Wax makers have been looking for a way to avoid this question for several years now.