With the launch of Season 5 in Sea of ​​Thieves, there is also another cascade of new achievements and commendations to unlock. In this article I will list them for you.

Commendations in Sea of ​​Thieves are kind of challenges you can do. Think of ‘deal 10 x a Chest of Rage’ or ‘defeat 50 x a Skeleton Ship’. Completing a commendation usually gives you a reward. Sometimes you will receive Doubloons (in-game currency), sometimes an Xbox achievement and sometimes cosmetics.

The commendations in Sea of ​​Thieves are an important part of the game, but are not always very insightful. It’s quite a search to find out what kind of commendations there are and after more than 40 content updates since release you can’t see the wood for the trees anymore.

With the arrival of the latest update I have therefore decided to put the new achievements and commendations in an overview. Hoping it’s of some use to you. You can then keep this list at hand and you don’t have to scroll through the different tab menus every time you play the game. Just have your phone to hand and take a look here every now and then. 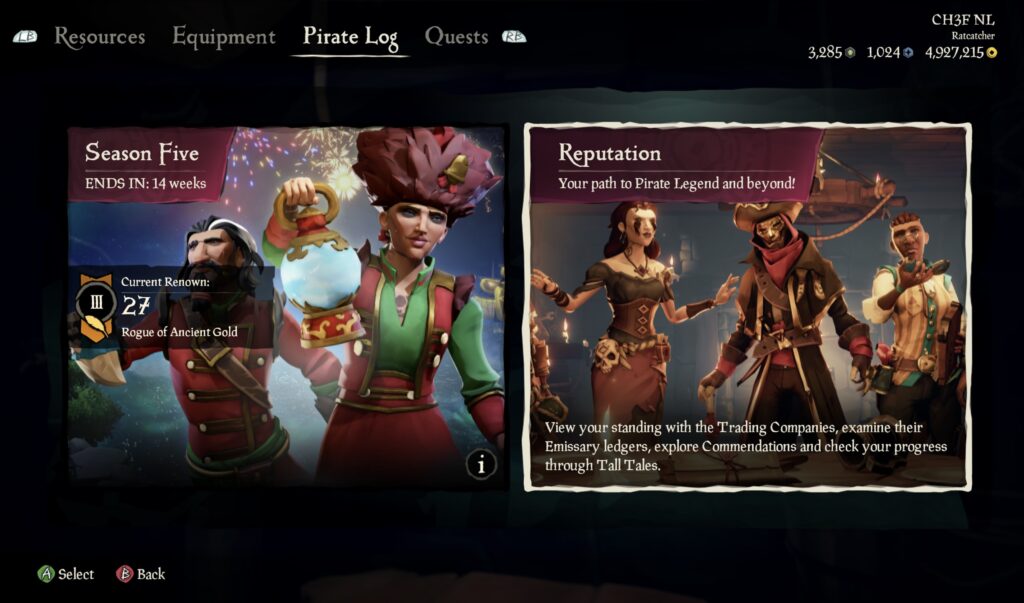 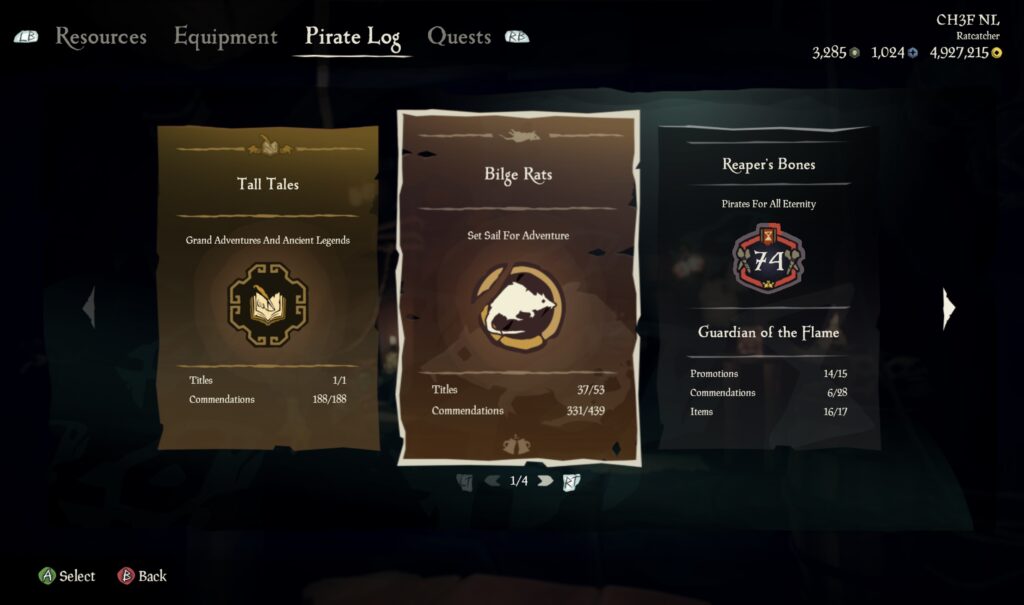 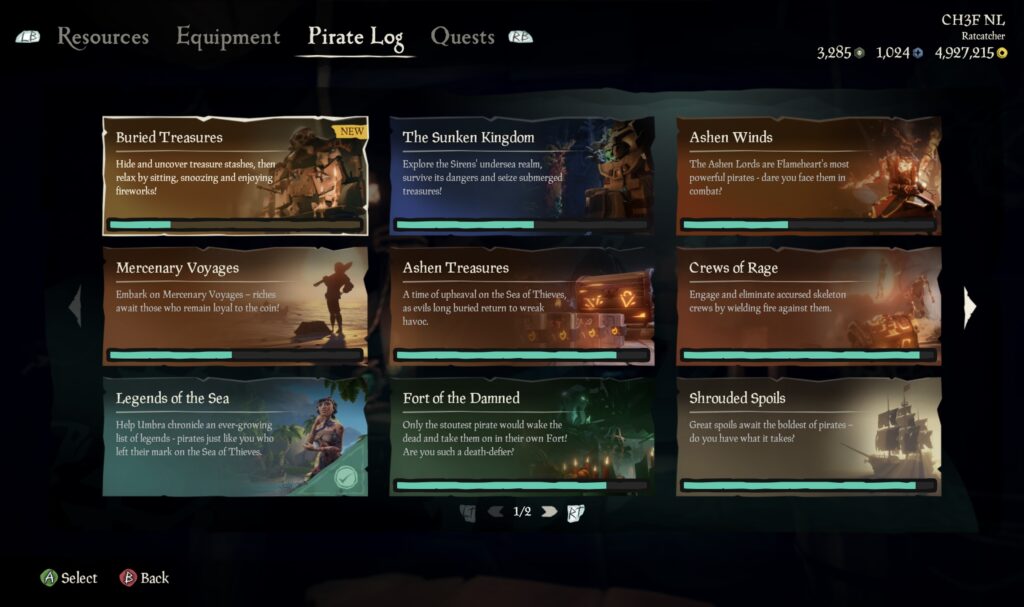 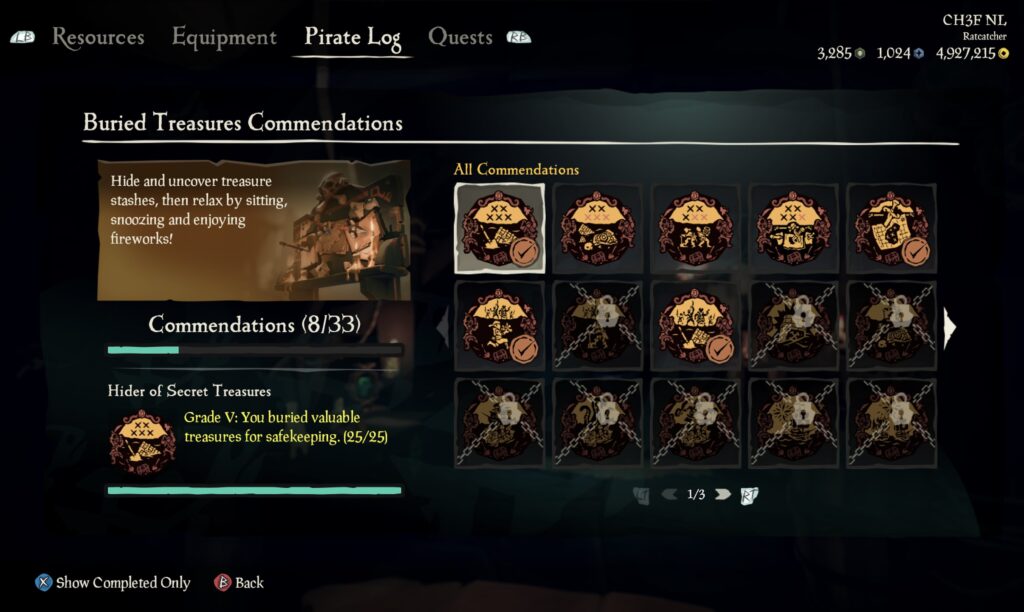 The Buried Treasure commands can be unlocked as follows:

Hider of Secret Treasure – Bury 25 treasures (Grade I – V)Hider of Sizeable Stashes – Make 25 treasure cards with at least 5 treasures buried on one island (Grade I – V)Seeker of Pirate Plunder – Dig up 25 treasures buried by someone else (Grade I – V)Master Cartographer – Donate 25 treasure cards to the Quest Board (Grade I – V)Benevolent Benefactor – Donate a treasure map with a large amount of buried treasureStolen Secrets – Place a closed Map Bundle on your Captains TableBurying the Past – Bury treasures you stole from another crewNothing To See Here – Bury a treasure while another crew is also on the islandHeir of the Trickster – Bury 10 Gunpowder BarrelsHider of Legendary Secrets – Bury 20 treasures of Athena’s FortuneSmall but Mighty – Shoot another ship 25 times with the Cannon RowboatWho Need a Bigger Boat? – Attack a Megalodon or Kraken 25 times with a Cannon RowboatHunting Boat – Defeat enemies with the Cannon RowboatSkies of Friendship – Shoot fireworks while part of an AllianceGunpowder, Treason and Plot – Burn another boat by shooting fireworks at itWarning Shot – Fire a Signal Flare when another crew is near your boatNight-Time Spectacular – Shoot 5 firecrackers in the sky while it is nightDown with the Ship – Sit in the Captains Chair of a Galleon while it is sinkingSeat of Thieves – Sit at a table in a Tavern with another crewSleepover – Sleep on the bed of another crew’s boatRest of Legends – Sit down with other Pirate Legends in Athena’s Fortune HideoutTavern Crawl – Visit every Tavern (7 in total) in the Sea of ​​Thieves and take a seat in every TavernMoment of Reflection – Sit at the end of the dock during sunsetA New Day – Sit on the highest spot in The Wilds (= Old Faithful Isle) during sunriseCatching Rays – Sit on the highest spot in The Ancient Isles (= Plunder Valley) ‘at noon’Adventurer’s Eve – Sit on the highest spot in The Shores of Plenty (= Smuggler’s Bay) during sunsetTribute Seat – Sit on the Throne during the ‘Shores of Gold’ Tall TaleA Golden Throne – Sit on the Treasury during the ‘Captains of the Damned’ Tall TaleThis is Fine – Sit on your ship while it is on fire Hot Seat – Sit on a volcano island in The Devil’s Roar while the volcano is eruptingCritical Roll – Roll the D20 Emote die on 20Legend of Buried Treasures – Complete All Buried of Treasure Commendations (37)Beholder of Buried Treasures Title – Complete all Buried of Treasure Commendations

Completing all commendations unlocks The Party Boat and the Midnight Blades cosmetic sets. 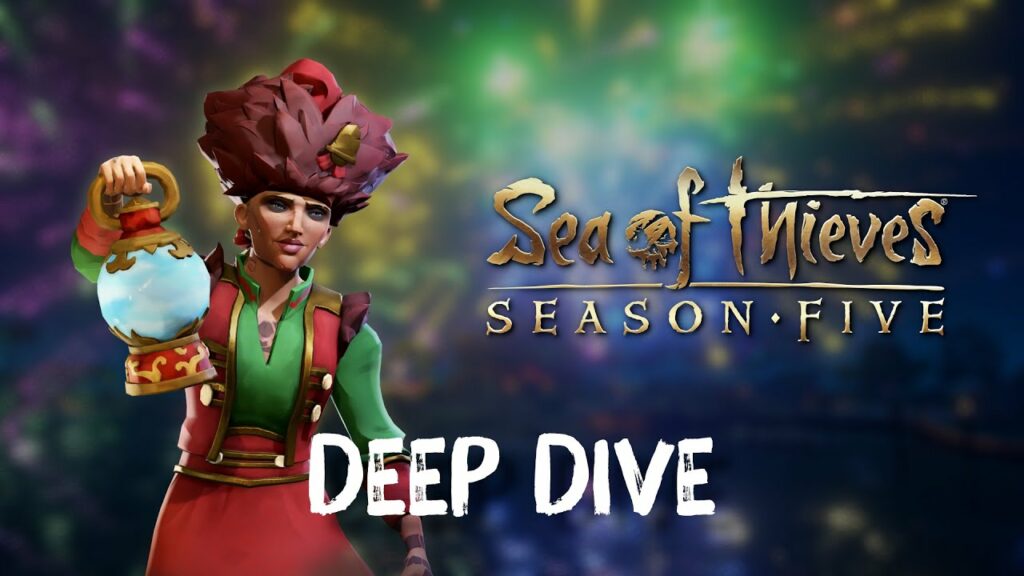 Let us know in the comments or on Discord if you find the above overview useful. Suggestions for improvement are welcome.

Over Sea of Thieves

As always: if you are new to the game and want some tips? We have described quite a few of them in this article. Not sure if Sea of ​​Thieves is for you? In this completely objective and fanboy-free review, 1000 days after the release of Sea of ​​Thieves, we took a close look at the state of the game. Would you like to share your adventures with others? Then come and visit our Discord join! And finally, would you like to hear what other players think about the latest Sea of ​​Thieves updates? In our regularly recurring video show the Tavern Talk we discuss this in detail.