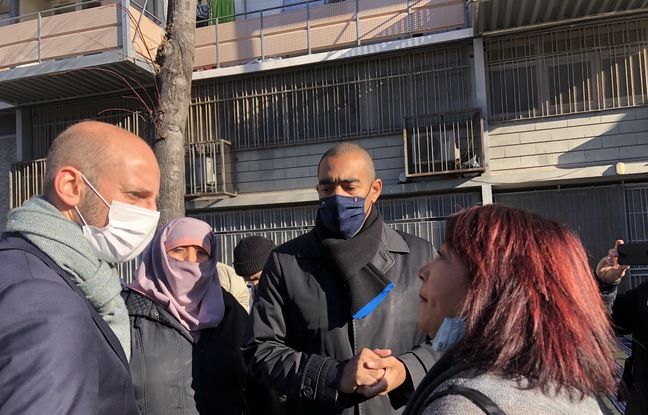 Do not look for Omar and Fred: on this Friday morning, the after-sales service is provided by Saïd and Stan, in the middle of the shabby buildings of the city of Font-Vert, in the northern districts of Marseille. One, Saïd Ahamada, is the LREM deputy of the sector. The other, Stanislas Guérini, is LREM delegate general, who came expressly from Paris to go to Marseille, and defend the record of the president, probably soon to be a candidate for re-election, Emmanuel Macron.

Initially envisaged as a door-to-door form, the visit to this city of the 14th arrondissement was finally escorted by a handful of residents, who do not hide their proximity to Saïd Ahamada, and some journalists, in the framework of the operation. “Listening” launched by LREM, a few months before the first round of the presidential elections, and which is worth the trip of the patron of the marchers in the northern districts.

“Tell Monsieur Macron that we are forgotten!” “

Residents who unanimously report the same speech during the visit. “The neighborhood is abandoned, sighs Eric, who has lived there for about thirty years. Before, there were taverns, a life. Now it’s dead. And in addition, for the renovation of the district, we are not listened to enough. “” The words are fine, but you have to keep them to the end! », Plague his neighbor« And you, Sir, are you going to help us, in real life? Tell Monsieur Macron that you went to Font-Vert and that we are forgotten! “

Faced with the small crowd, quite upbeat, Stanislas Guérini tries to convince. “Emmanuel Macron came three months ago,” he recalls. Since then, the budget has been voted in the National Assembly. And it is your deputy, Saïd Ahamada, who voted for the amendments to give one billion euros for transport to open up a certain number of neighborhoods. It’s not empty words! “And to cite also the increase in the budget allocated to the renovation of certain neighborhoods.

“We still have a lot of things to do”

“I find it superimportant to explain what has been done and the means that have been put in, believes Stanislas Guerini. We must be proud that a certain number of things have been able to move forward… ”“ Thanks to our arms, ”one inhabitant cuts him off with a sigh. “Me, I never wanted to look away from the difficulties,” continues Stanislas Guérini. We must stop the moments when we have to go see people and make promises to them that during an election campaign. I think we can, at the same time, come and see the difficulties and tell ourselves that there are solutions. I don’t listen in an impassive way. There are a lot of things that have been done in this quinquennium. But we still have a lot to do. “

“It’s been like that for years, plague David, inhabitant of a neighboring city. Every year, they come, they do neighborhood tours, they tell you: “The change is now! With my magic wand, I’m going to change your neighborhood!” “I, you know, don’t really believe in politics anymore,” sighs Hadda. For years that we have lived here, we have had plenty of promises, but no commitment… ”In the fourteenth arrondissement of Marseille, in the last presidential elections, abstention was around 37%, or nearly 12 points more than in 2012.