A quarter of the auditory traffic lights in the city fail

“The last two weeks he has failed quite a bit. It is not heard loud and the sound is failing. He remains silent, ”says Adriana Carrillo about the auditory traffic light located on Avenida Alcalde, in front of the State Council for Sports Promotion (Code).

The also president of the Association of Adapted Sports for the Blind and Visually Impaired of Jalisco, mentions that it crosses when the cars stop.

She adds that another point where they almost always help her to cross is in Alcalde and Ávila Camacho, in La Normal. “I don’t know how that traffic light works, I don’t understand it.”

This last equipment is one of the six auditory traffic lights that present failures in the Metropolitan Area of ​​Guadalajara, according to information provided by Transparency by the Metropolitan Agency for Mobility Infrastructure.

The information was also requested from the Jalisco Secretary of Transportation and the metropolitan councils, but they declared the information non-existent because it is the Agency that concentrates the data.

For its part, the Urban Electric Train System (Siteur) responded that in the last two years the 64 traffic lights and 22 hearing devices were updated to support people with visual, hearing and motor disabilities.

The low number of these devices stands out in the face of the increase in people with a disability. According to the Inegi Population and Housing Census 2020, in Jalisco there are 386 thousand people in this condition, while a decade ago there were 290 thousand. And more than 30,000 have a visual impairment.

Martín de Jesús Cortés, who is 23 years old, studies psychology and lives with visual impairment. It points out that the authorities should increase the number of audible traffic lights on the most conflictive roads.

“Fortunately, we have not had mishaps in the city.”

Use Fund for Accessibility in Public Transport

To improve the mobility of people with disabilities who use the Light Rail, during the past year and the current one, the authorities made use of the Fund for Accessibility in Public Transport for People with Disabilities, according to information from the Electric Train System Urban (Siteur).

The available bag was 27.4 million pesos, which were used for the acquisition of accessible transport units for people with disabilities to travel on the Feeder Route 1 of the Comprehensive Train System (Sitren).
In addition, for the reconstruction of existing stops for transportation on feeder routes 2 and 3.

The agency reports that the budget was also used for the supply and installation of mechanical traffic light controllers for people with visual, hearing and motor disabilities, on safe cruises of Line 1 of the Light Rail.

In the latter, one million 184 thousand pesos were invested to replace and update 64 traffic lights and 22 hearing aids, by animated pedestrian traffic lights with a second hand and new hearing devices, “in conjunction with the renovation of six traffic light controls for the compatibility of technologies.”

It should be noted that the foregoing was done in response to requests from Light Rail users received through the Passenger Service Center.

The installation of these equipment was also highlighted in the Third Report of the Government of Jalisco, in which it is confirmed that the traffic lights count down for people with visual, hearing and motor disabilities, in order to improve and facilitate pedestrian crossing at the level of 11 safe crossings of Line 1. 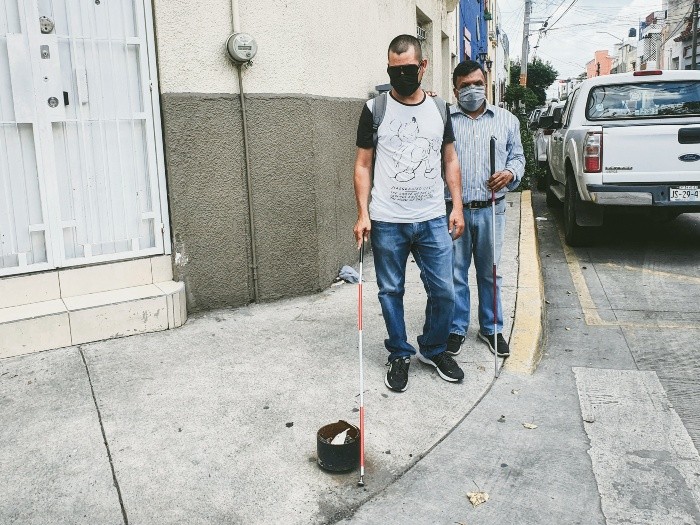 Census. People with a disability ask the authorities for universal accessibility. The Informant / G. Gallo

Because the 125 State Councils have not shown progress in complying with recommendation 1/2018, nor have they taken sufficient actions to achieve compliance with the Convention on the Rights of Persons with Disabilities, or with federal legislation and state on the matter, “thereby violating the human rights of legality and legal security”, the State Commission on Human Rights (CEDHJ) issued a new recommendation.
The agency highlights that it is issued due to the comprehensive breach of the duties and obligations of municipal governments in the development and implementation of public policies on disability, as well as the lack of affirmative actions aimed at preventing, reducing and eradicating the gaps in accessibility, inequality and discrimination of this group of people. The members of the City Councils are asked to urgently implement the necessary actions to carry out the comprehensive reparation of collective damage, in terms of the General Law of Victims, the Law of Attention to Victims of the State and all the laws considered in The document. “The foregoing, as an act of recognition, attention and due concern for people with disabilities who live and transit in the municipality,” it is added.
An inter-institutional and multidisciplinary team is requested to review the progress in compliance with general recommendation 1/2018 on accessibility, inclusion, equality and non-discrimination of people with disabilities in Jalisco, as well as the reports and recommendations issued by other international bodies on the matter.

Villanueva reproaches the approval of the 2022 budget; there are more punished

There are more than two thousand cruises with vehicular traffic lights

• Regarding the vehicle traffic light system, the Metropolitan Agency for Mobility Infrastructure recalls that in the 1950s, intersections were operated by traffic agents, who gave way to vehicles.

• In 1990, the project to centralize different intersections was launched, with a total of 750 cruise ships.

• Four years later the centralized traffic light system began in Guadalajara, which is in force.

• Today there are 2,076 signalized intersections. In addition, the Smart Mobility Infrastructure program is underway to update the system, with 20 corridors and 491 intersections.

They suffer from the lack of ramps

“Many sidewalks are very complicated. Where I live are the typical narrow sidewalks, where everyone made the garage at the height they wanted. There are a lot of ups and downs, poles in the center … then people place their garbage bags “, says Adriana Carrillo, president of the Association of Adapted Sports for the Blind and Visually Impaired of Jalisco, who lives in the La Normal area .

The young woman, a physical therapy student, says that she almost always prefers to walk on the banks of the avenues. “The street is straighter than the sidewalk. And also the neighbors leave their gates open, they leave their cars on the sidewalk. When there are a little more spacious sidewalks, it is common for cars and motorcycles to go up ”.

Of the 212 thousand 907 streets that are counted in the municipalities of Guadalajara, Zapopan, San Pedro Tlaquepaque, Tonalá and Tlajomulco de Zúñiga, 138 thousand 457 lack ramps for wheelchairs and 130 thousand 562 do not have a pedestrian crossing; that is, almost seven out of 10 roads are inaccessible, according to the Characteristics of the Urban Environment of the 2020 Population and Housing Census, of the National Institute of Statistics and Geography (Inegi).

In addition, in this diagnosis it is specified that 57,106 roads do not have sidewalks available. This represents a greater risk for people with a disability.

Martín de Jesús Cortés, who has congenital glaucoma, explains that the city’s road infrastructure needs to be improved. “Especially on the sidewalks, many are very narrow or have many obstacles; for example, for people or wheelchair users… and in my case, we are people with visual disabilities ”.

Indicates that this hinders travel. “And then we add that many times people put obstacles on the sidewalks, such as the stalls to sell. More even floors would be lacking, that did not have so many obstacles. Just as drivers complain about potholes, a problem for us is the discrepancies between the sidewalks ”.

He emphasizes that to travel in the city, he is almost always accompanied by family members, who support him to go to university and other activities he does, but when his transfers are solo, he almost always uses Line 2 of the Light Train, which counts with speaker audio devices.

“I have used Line 3, but it is a little more complex because, at least when I have gone up. It does not have the notices about the stations. “

Last september, The Jalisco State Human Rights Commission (CEDHJ) issued precautionary measures after the death of a 50-year-old man with visual impairment, who lost his life when he accidentally fell onto the Light Rail tracks, at the Refugio Station of Line 1.

What do you think of urban infrastructure in favor of pedestrians?

Hamraoui claims to have been threatened by Diallo’s bodyguard

Rape charges against Jean-Luc Lahaye: the mother of one of the complainants indicted for non-denunciation of a crime