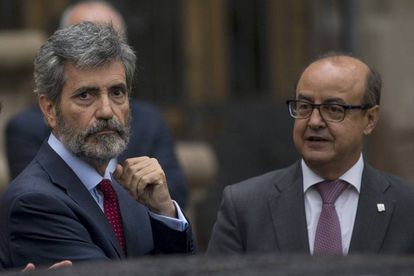 The president of the Supreme Court, Carlos Lesmes, and that of the Superior Court of Catalonia, Jesús María Barrientos, in 2019.Quique García

The General Council of the Judiciary (CGPJ) has endorsed the recurring request of the Superior Court of Justice of Catalonia for the judges assigned to that community to receive a salary supplement. The permanent commission of the Council has urged this Thursday the Ministry of Justice, on whom the payroll of the members of the judges depends, to implement a specific bonus to fight against what the Catalan court defines as the “permanent desertification of the judicial plant” . The intention is to incentivize the selection of Catalonia as a work destination with money. The pressure derived from the independence conflict or the existence of their own civil law act as deterrents.

The specific destination supplements for judges and magistrates have been in force for years in those territories in which it has traditionally cost more to fill vacant positions, either due to the threat of terrorism (Basque Country and Navarra) and because of the distance from the Peninsula (Canary Islands, Ceuta and Melilla). For Catalonia it has never been implemented, but the regional court has been claiming it for a long time because there are more and more places that are impossible to fill with regular judges and that have to be filled by substitutes.

Justice will now have to study if it agrees to the Council’s request and establishes a bonus similar to that which already exists in other territories and whose amount ranges between 80.23 euros extra per month for judges assigned to the Arán Valley and 844.70 of those of Ceuta and Melilla, according to the salary table approved for 2021. Those destined for Gran Canaria and Tenerife charge a plus of 427.58 per month, while that of those destined for other islands of the archipelago is 534.48.

The pressure derived from the independence conflict has been, according to sources from the Council, the definitive trigger for this situation, but the Judicial Power and the regional superior court point out that the problem has existed for “decades” for different reasons, including the cost of the life, the lack of opposition tradition for access to the judicial career and the difficulty that the fact that Catalonia has its own language and civil law may pose for judges from other communities. “The desertification that has been verified is not a temporary or transitory phenomenon, nor does it have any signs of disappearing by itself”, warns the Government Chamber of the Catalan high court in an agreement reached on November 26.

That text, which included the request that a salary supplement be implemented for the titular judges of that community, was submitted to the Council and the permanent commission, the highest decision-making body of the CGPJ after the plenary session, has unanimously supported this Thursday request and has decided to refer it to the Ministry of Justice. Before taking this step, the body led by Carlos Lesmes last Wednesday consulted the presidents of the National Court and the rest of the Superior Courts of Justice, who supported the decision.

The Catalan courts await the next incorporation of 74 new judges of the 188 who joined the race last Monday, but that arrival will only mean a “temporary relief” of the situation, according to the text of the TSJC agreement. “It cannot be ignored that, after the first year, these judges – who are assigned to Catalonia practically forcibly – will be able to participate in transfer competitions, with the consequent risk of mass exodus. In fact, this has happened with the judges of the 69th Class of the Judicial School who, after the first year, have chosen, in large numbers, to leave this territory, “warns the regional court.