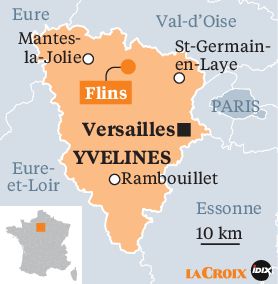 Recondition rather than repair. The term is so trendy that Renault now applies it to its vehicles. The diamond firm inaugurated on Tuesday, November 29 in Flins-sur-Seine (Yvelines) its Factory VO, a used vehicle reconditioning plant, already operational for fourteen months, and which is one of the other pillars of its Refactory project dedicated to the “circular economy of mobility”.

Until now, for a deep scratch, a sunken door or a torn bumper, used cars were repaired in dealerships, going from dent removal to painting, from one service provider to another in 21 days. Today, in just 8 days – plus 2 return transport – the vehicle is refurbished within the budget set by the sales manager.

The first step takes place in a car dealership, when a customer requests the return of his car for the purchase of a new one. Obviously, it has at least a few flaws in appearance, and sometimes a lot more. In view of its condition and the expected cost price, the dealer establishes the desired level of reconditioning, with the latitude to ignore a few faults and the assurance of having the last word in the face of an additional cost that he would not have. identified. From start to finish, exchanges are digitized.

Arrived in Flins for the “industrial refurbishment”, the vehicle undergoes 80 checkpoints and engages in a reconditioning process in an 85,000 m2 workshop from which it will not come out until after work and photos. Today, 70 vehicles go out every day. They will be 130 at the start of 2022 and Renault is targeting 200 by 2023. After the group’s passenger cars and then utility vehicles, Factory VO accepts other brands. The customer is assured of the homogeneity of the work.

For now, management kicks in as soon as the question of cost – more expensive or less expensive than in concession? – is discussed. The managing director, Luca de Meo, hopes “to earn more” than with the new vehicle sector and that “it will be a profitable business”. This project, which aims to achieve more than one billion euros in turnover per year by the end of the decade, is a “big challenge to be taken up in the context of the circular economy”, recognizes Luca de Meo. One thing is certain: Flins, which currently employs 3,050 people, including 1,050 temporary workers, will stop producing Nissan Micra and Renault Zoé in 2023 and 2024. For the moment, 700 employees have been trained to work at Refactory . They will be joined by the 1,300 operators of the current assembly lines, the site planning to employ “more than 3,000 people” by 2030. Eight million euros have been injected into the transformation of the site and additional investments. will support the development of the activity, in particular the conversion of utility vehicles to electric (“retrofit”), which must be “studied” by 2023.

The Flins site, larger than Monaco, will rely on three other poles: Re-Energy for battery repair, with an annual target of 20,000 units by 2030; Re-Cycle for the recycling and reuse of parts and materials then electronic cards and Re-Start, which will integrate, from next year, an incubator dedicated to research and innovation in the circular economy and new certifying training courses . From there could come out 3D elements able to replace mechanical parts, such as those of the 700 collection vehicles that the site houses in a museum, out of sight.

Gregory Porter: ‘When I sing I release my pain’