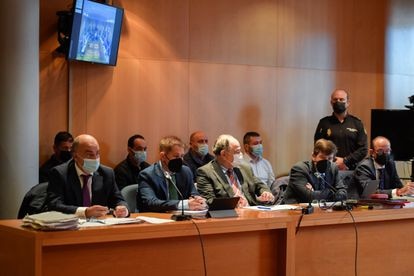 Adrián Fernández, defense attorney; Fernando Barutell, lawyer for the wife of one of the hitmen in the case, and Luis Mendiguren, lawyer for Luis and Jesús Muguruza, among others, before those accused of the murder of the IU councilor in Llanes Javier Ardines, on November 2. Alonso (EFE)

The popular jury that analyzes the murder of the councilor of Llanes Javier Ardines in 2018 has identified as guilty the four accused of plotting the death of the Asturian mayor. The Prosecutor’s Office has requested 25 years in prison for Pedro Nieva as the intellectual author of the events, as many as Jesús Muguruza as a “necessary intermediary” to contact the two hitmen responsible for the fatal blows, and the same penalty for Djilali Benatia and Maamar Kelii as material executors of crime. The verdict, supported unanimously, confirms that Nieva plotted the coup to liquidate his friend Ardines, who had an extramarital affair with his wife.

The position held by the nine members of the popular jury, who have deliberated for two days and have unanimously issued a guilty verdict, must be addressed by the judge of the Second Chamber of the Provincial Court of Oviedo before his sentence, scheduled for future dates.

The trial sessions have elapsed for several weeks in which two opposing positions have been maintained: the private prosecution and the Prosecutor’s Office arguing that the motivation for Ardines’ murder was Nieva’s jealousy; and his defense, his partner Muguruza and the two hitmen, who have tried to dissociate themselves from what happened.

Various tests have played against the four defendants. Among them, the telephone signal of Benatia and Kelii’s mobile phones at the scene of the murder on August 16, 2018, the date on which the Asturian mayor received a beating and was strangled. Also, the existing connections between Nieva and Muguruza, which have shown that both were in league once the first of them, an old friend of Ardines, had discovered months before that his wife, Katia Blanco, was unfaithful to the councilor, who to in turn he was married to a cousin of hers.

The prosecutor has insisted during this time of court appearances, always supported by the position that the Civil Guard wielded during the months of investigation, that Pedro Nieva was “obsessed” and “tormented” after discovering the extramarital affair. The now considered guilty learned of the fact after recording with his mobile a conversation between Ardines and Blanco, but declared that he was not “controlling”, the same position that his partner defended. But the investigations showed that for months he had been looking for monitoring mechanisms for Katia and even installed an electronic system in her car.

The police tracing has also rejected the argument of the two hitmen, who assert that they had never been to Asturias and that there were no DNA remains at the crime scene, and they recalled that Benatia made an initial confession in which he admitted his involvement in the murder and the plan orchestrated by Nieva. In fact, the prosecutor in the case has made it clear that those responsible for the death of the Izquierda Unida councilor in Llanes were fully aware of the victim’s routines.

These habits included frequent trips to the sea by this fisherman turned politician, so it was easy to know where he was moving with his vehicle from first thing in the morning. And, thus, in the early morning of August 16, 2018, Ardines came across some fences that blocked the path he was traveling on in his car, he got out to remove them from the path and was brutally beaten and suffocated by the two hitmen. according to research. Fifteen days before they had tried a similar plan, but the mayor managed to evade the beacon that had been placed on the road.

Contradictions of the accused

The contradictions of the defendants in the trial have made it possible to offer an irregular story that has included a new figure in the story: these four men spoke of a certain Julián to justify a trip, weeks before the event, to the Principality. According to Nieva and Muguruza, this Julián was an expert in repairing roofs and accompanied them to Nieva’s home in Asturias. However, this name had not been mentioned before nor has it appeared before the judge. The investigation has allowed us to appreciate that on that journey it was Benatia who was there, who was shown the area and instructed on Ardines routines to promote an effective assassination. Even in Kelii’s home search, the agents found a pepper spray whose components match the remains they found on the victim’s clothes, body and surroundings of the car.

The defendants have tried to dissociate themselves from the case with the thesis that there were no biological remains of him in that place, but of another woman with whom the investigations have shown that Ardines had another affair. That DNA, investigators have maintained, appeared there “by transfer” after a previous sexual encounter and had nothing to do with the crime. Likewise, Benatia tried to attribute his confession to alleged “pressure” from the Civil Guards, which they and their bosses have denied.