A shot to the head ended the life of who was at the time the most wanted man in the world.

However, despite the 28 years that passed, it is still debated who pulled the trigger for the shot that killed Pablo Emilio Escobar Gaviria.

There are several theories and attributions that have been made about the death of one of the most famous drug traffickers in history and some of them collide with the “official version” told by the Colombian authorities at the time.

The account held at the time indicates that it was a police officer who shot the then leader of the Medellín Cartel, however, from other sides they came out Narratives so different that go from the authorship of paramilitaries to a suicide.

What is truly known is that the famous Pablo Escobar died on December 2, 1993, at the age of 44, in the city that he turned into his refuge and trench.

More than a quarter of a century later, at BBC Mundo we will tell you about the fall of the one who was called the Patron and who marked with blood and fire a decade in the history of Colombia.

The most widespread version of Escobar’s death, recounted in dozens of books, television series and movies, is that he was discharged by the then police commander Hugo Aguilar along with other members of the Colombian security forces.

This controversial character became a lieutenant colonel, later he was a deputy, governor of the Santander department and was convicted of ties to paramilitarism in 2011.

This year, in February, he was again temporarily detained for alleged illicit enrichment.

“I took the radio and shouted: ‘Viva Colombia”, Aguilar tells about the moment of the death of the drug trafficker in his book “Thus I killed Pablo Escobar” (2015).

The policeman thus claimed that he was the person who fired the shots that hit the drug dealer. 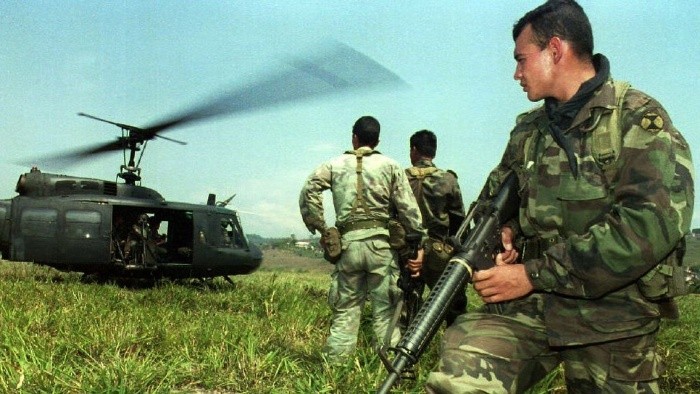 There came a point where Colombia spared no resources to catch the head of the Medellín Cartel. GETTY IMAGES

The drug lord had been fleeing for months from the police, the armed forces and an elite body known as the “Search group”.

The United States sent agents from the Drug Enforcement Administration (DEA) and the Federal Bureau of Investigation (FBI) to help track down the cartel boss.

The Colombian government had been in a very bad way after Escobar and his men escaped from jail in 1992 without major problems.

La Catedral prison was the place where the drug trafficker spent less than 13 months in detention negotiated with the authorities.

This prison was reconditioned by the same people of Escobar and for that reason it could be verified later that it was full of luxuries and comforts.

Colombian police later revealed that the capo spent time there between soccer games, parties and visits from your family and business partnersO.

They found several coves (hiding places for money and drugs) within the walls of the Cathedral, as well as fine furniture, weapons, sound equipment, giant screens and three-meter beds, among many other things. 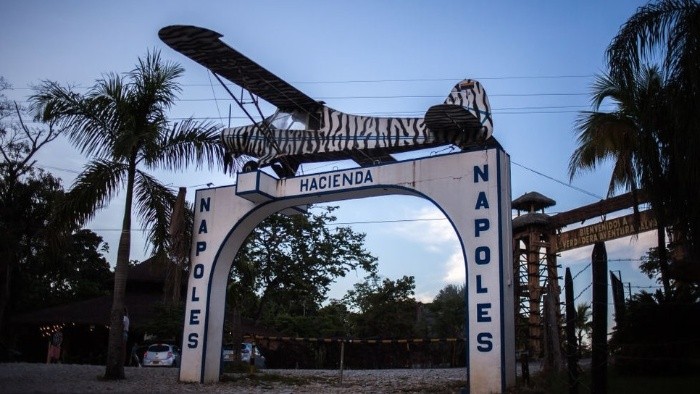 The famous Hacienda Napoles was one of Escobar’s favorite places. GETTY IMAGES

Since Escobar disappeared from there, his search was declared a national priority and the drug trafficker who began his days on the streets of the small town of Rionegro, in the state of Antioquia, has become the most wanted man in the world.

With his wife and two children confined in a hotel in Bogotá and most of his men imprisoned or dead, he had no choice but to hide and resist in Medellín.

More and more cornered, made mistakes in his attempts to get his family out of the country, which led to his being located.

According to the “official history”, the credit for having found and discharged him corresponds to the Search Group and the Colombian intelligence services.

The Pepes (Persecuted by Pablo Escobar) was an alliance between the paramilitaries and drug traffickers enemies of the Medellín Cartel.

They told a very different version throughout all these years, largely taking credit for the decline of the capo who died 26 years ago.

According to some of its members, who even wrote books on it, its role was crucial in the weakening of the cartel that at the time controlled 90% of the world’s cocaine trade. 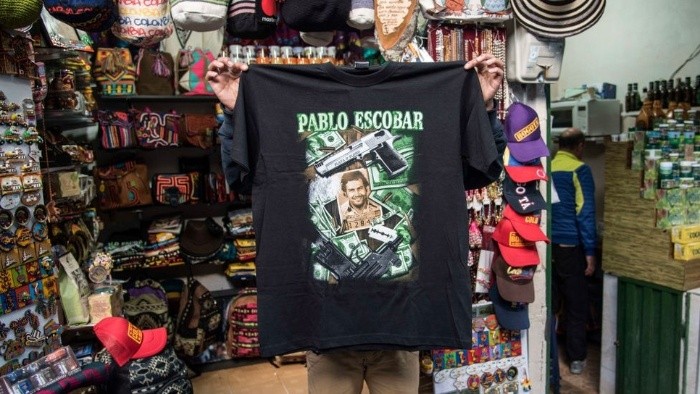 Although it is somewhat criticized, Escobar’s face is found in different accessories in various cities in Colombia. GETTY IMAGES

One of the leaders of the Pepes, Diego Murillo, a paramilitary and drug trafficker known as Don Berna, assures that the bullet that pierces Escobar’s skull was fired by his brother.

In his book “This is how we kill the Patron“(2014), recounts his version of the drug lord’s last hours and assures that he witnessed his death.

“His main collaborators had been discharged, others were in jail. The message that the members of Los Pepes sent was overwhelming: whoever gave help to the ‘Patron’, would die“, said Don Berna.

The paramilitary, who in 2008 was extradited to the United States for drug trafficking, assures that his organization maintained contacts with the police throughout the search for Escobar.

He adds that it was Los Pepes who rounded up and detected the most wanted drug trafficker in the world and not the “Search Group.”

“His movements were slow due to the great overweight he was. He went up to the second floor, because there was a small window that overlooked the roof of a neighboring house. Pablo was running on the roof when my brother reached the window, pointed at him and shot him to the head with his 5.56 caliber M16 rifle. “, says Don Berna. 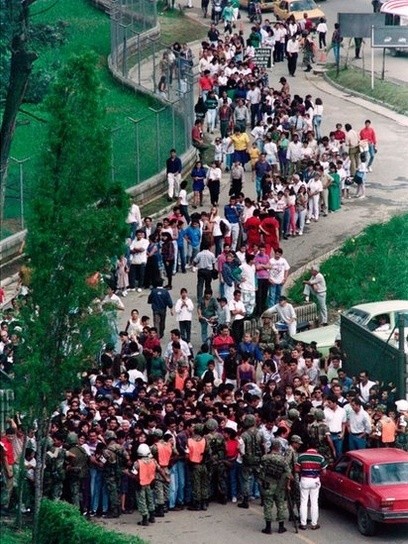 Escobar’s burial was followed by dozens of people. GETTY IMAGES

The paramilitary leader said that later, on December 2, 1993, the dome of Los Pepes would celebrate what happened with French wine vintage 1948.

Other members of Los Pepes, in interviews with the press or judicial testimonies, even said that the fatal shot was fired by Carlos Castaño, a well-known leader of the United Self-Defense Forces of Colombia.

One of Escobar’s best known phrases is “We prefer a grave in Colombia than a jail in the United States“.

With that slogan it was that the drug trafficker launched a bloody war against the Colombian State and that turned Medellín into the world capital of homicides in the 1980s.

His famous motto also served to support the hypothesis that the trafficker committed suicide on the roof where he was trying to flee when he saw that he had no escape.

The theory that Pablo Escobar shot himself in the head is supported by the narco’s relatives, such as his nephew Nicolás Escobar, who was present at an exhumation of his uncle’s remains and, showing the perforated skull, assured that it was a suicide.

The wife, María Victoria Henao, and her eldest son, Sebastián Marroquín, who published books on the life of the family patriarch also left open the possibility that this is how the death occurred. 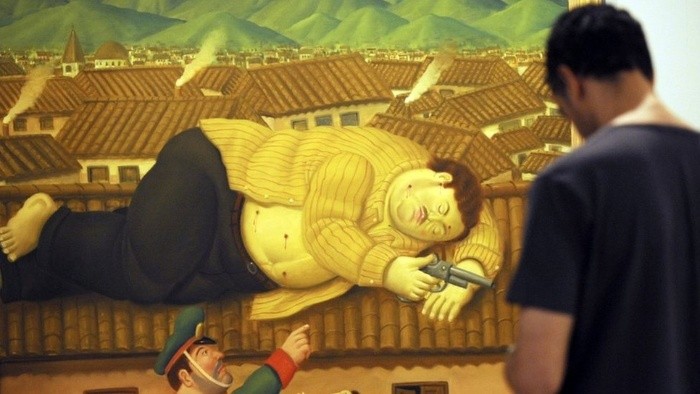 “My father always told us that the telephone was synonymous with death because they could easily trace us and the day he died he called us so much that it makes me think that he wanted the police to arrive and that he wanted to die in combat. It is also a way of committing suicide“, indicates Marroquín, whose original name was Juan Pablo Escobar.

The funeral and burial of the former head of the Medellín Cartel was accompanied by hundreds of people in Medellín, the city where he became powerful, from which he fought with everything he could against the Colombian State and where he spent his last months in hiding and sick.

There are endless stories that still circulate in this city about the life, excesses, waste and brutality of the man who was the most wanted in the world.

The stories navigate between legend and reality and it could not be different with the narratives of the day the Patron fell.

* This article was originally published on December 2, 2018 on the occasion of the 25th anniversary of Pablo Escobar’s death.

Now you can receive notifications from BBC News Mundo. Download the new version of our app and activate them so you don’t miss out on our best content.

Seven years imprisoned in Mexico for an injustice

Weather in Tlaquepaque today: the forecast for Monday, May 23, 2022

Morning news of Monday 23 May