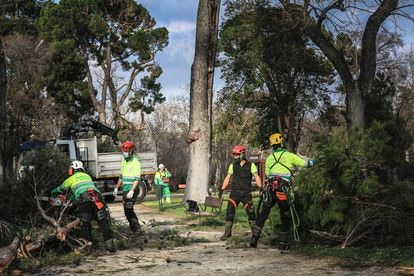 A year later, the figures. The storm, squall, snow and especially chaos that it supposed Philomena for the capital of Spain, still queuing in numerous parks and roads. On January 8 and 9 of this year, Madrid received an unprecedented snowstorm from the sky for one, two, three, four, five and so on, up to 48 hours. To be graphic, the mayor José Luis Martínez-Almeida himself gave an example during those days: “We would have to put a row of trucks with a capacity of 40,000 kilos each from Puerta del Sol to Brussels.” 1,587 kilometers of snowy roads, said soon. The hours of interrupted snowfall left a white blanket of between 25 and 30 centimeters in the city inside the M30, the ring that surrounds the center of the city. But outside, in the suburbs, and in many cases the part most forgotten by the media and politicians, they reached up to 50 centimeters. If a neighbor dared to leave the portal and step on the street, he would sink to his knees.

A report from the General Directorate of the Environment Area of ​​the City Council, to which this newspaper has now had access, has finally highlighted the catastrophe that Philomena for the green areas of the capital. For a long time the magnitude of the damage has been talked about in round figures, an accurate sampling, but at the same time very diffuse. “Thousands of trees affected.” “Hundreds and hundreds of pruned specimens.” “Dozens and dozens of green areas damaged.” The reality, according to the internal study of the City Council, is the following. The 16 large parks that Madrid has – Casa de Campo, Madrid Río, El Retiro, Dehesa de la Villa, Parque del Oeste, El Capricho, Quinta de los Molinos, Fuente del Berro … – altogether add up to 826,423 trees. As well, Philomena it damaged 269,166 specimens, almost one in three. The figure is even worse when you go into the details. Of these, 186,125 had to be pruned. That is, 70%. A brutal amputation for the city’s true green lung. The worst thing is that the surgery is not over yet: 83,041 had to be felled. One year later and with the exact figures in hand, Philomena it was a real environmental catastrophe.

If you delve into the internal map of the City Hall, the scalpel of the raging storm has been very disparate according to the parks. Just two great examples. In El Retiro, where the trees reach 17,400 specimens, 10,963 were affected: 63% of the park. Of these specimens, 10,372 had to be pruned and 591 were felled. It should also be remembered that the park was closed for almost three months. But if a park was treacherously damaged, that was the Casa de Campo park. This green area of ​​the city, the most important for its magnitude and its green cover, has 627,500 trees. Philomena it damaged 207,480, 33% of the territory. Of these, 135,150 were pruned, 65%. And, finally felled, 72,330; 12% of the trees in the park. An unprecedented tree amputation.

The worst hits were taken by the El Capricho park, the 14-hectare triangle-shaped garden located in the Alameda de Osuna neighborhood of the Barajas district, northeast of the city. Here, 88% of the trees suffered some kind of year. Only 386 of the 3,350 species were saved. Later, it is followed by Parque del Oeste, with 72% of the damaged area, then Quinta de los Molinos and then, yes, El Retiro. Although in numbers, logically, the Casa de Campo takes the worst part.

Faced with such an environmental catastrophe, the City Council started a reforestation plan in October. To alleviate the problems of the parks, Almeida convened the so-called Table of the Tree almost a year after the start of his mandate. Three years later, according to sources from the Table, where various environmental groups meet, in addition to the opposition, they have only met three times. The last one was last spring. This Friday will be the fourth. There the mayor’s team will teach these reports and the reforestation plan for the city.

Almeida’s plan is to plant 100,000 trees between this year and next. According to another internal document to which this newspaper has had access, the planning is as follows. For urban areas beyond the M30, M40 and M50, the rings away from the central area, 60,000 trees will be planted. And for the great parks of the city, the following: the Casa de Campo will be reforested with 5,000 copies. That is, it would take another 55,000 to be at the same level as it was before Philomena. For El Retiro, the plan only includes 235, and it would take another 356 for the park to be located as before Philomena, where 591 specimens were cut down. In Madrid Río, more of the same, 105 will be planted and 355 were felled. For El Capricho, 5, and Environment employees cut 121. For the Juan Pablo II park, 25, and there was a pit of 299 species. Fuente del Berro, 2, and 61 were felled. For the Parque del Oeste, 19, and Philomena ended with 302. Thus, in the vast majority of parks.

The mayor of the Environment, Borja Carabante, tells by phone that his area has dedicated 36 million euros to clean up all the trees affected by the storm for almost three months. Regarding the criticism of the opposition for its reforestation plan, it explains that “it is not a political question, but a technical one,” based on a panel of seven experts, such as Ángel González, head of the National Heritage Gardens and Forests Service or Ana Luengo, Landscape architect of the International Council of Monuments and Sites (ICOMO). “Our team of experts told us that you shouldn’t plant a tree for every tree felled, but see how these plantations respond. We do not rule out, in any case, making extraordinary plans ”.

For the opposition, however, there is no reforestation plan after the massacre of Philomena, but a strategy similar to that of other years. “Almeida does not have a plan to recover the 94,000 trees that were lost with Philomena”, Says the spokeswoman for Más Madrid, Rita Maestre by phone. “Your inaction puts the green heritage of our city at risk. Almost a year has passed since the passage of the storm and his poor management continues to be noticed. Our trees are still in very bad condition and the City Council has been unable to present a recovery plan ”. The Tree Table meets this Friday and, at first glance, it will not have much consensus on green.