Alfaro thanks deputies for approval of spending 2022; Rector of the UdeG regrets lack of support

After the Jalisco Congress approved the expenditure budget and the 2022 Income Law early Thursday morning, the state governor thanked the legislators of Movimiento Ciudadano, Morena, PAN, PRI, PVEM and Futuro for “being an example as space for dialogue and construction of agreements. ”.

Through a message on social networks, the state president recognized the work of the deputies, and He said it was the “best example that in Jalisco we are fundamentally united and working beyond colors and parties”.

“With the vote in favor of the deputies of Movimiento Ciudadano, Morena, PAN, PRI, PVEM and Futuro, the budget with which Jalisco will face enormous challenges next year was approved,” wrote the governor.

For his part, the rector of the University of Guadalajara (UdeG), Ricardo Villanueva was disappointed by what happened early Thursday morning in the Jalisco Congress and he assured that this “legislature opens as a subdued legislature, which puts the whims of a single man above the common good.” 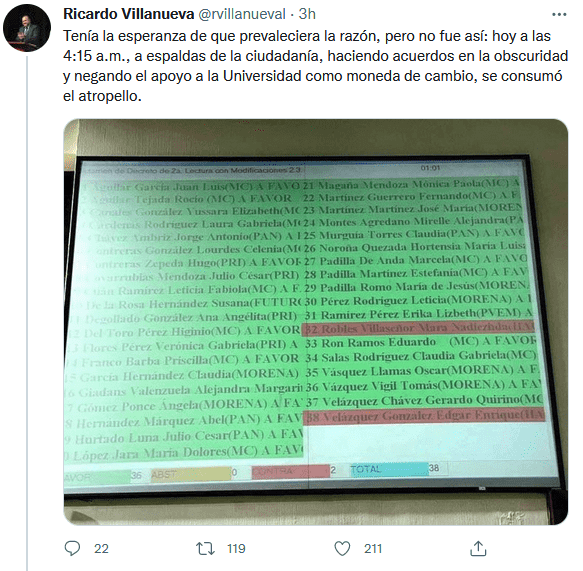 In addition, Villanueva stressed that the UdeG will continue to denounce the abuses of power and will remain faithful to its fight to defend what is fair. He also highlighted the work of legislators Enrique Velázquez and Mara Robles, both from Hagamos, for “always standing firm and up to par.”

At 02:30 hours today, the deputies began with the discussion of the budget project, and concluded shortly after 05:30 in the morning after discarding reservations in the particular. The opinion was approved in general with 36 votes in favor of the fraction of the Citizen Movement, Morena, PAN, PRI, Future and the Green Party; voted against the 2 legislators of Hagamos.