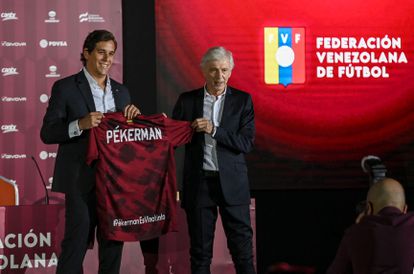 José Pekerman receives the Venezuelan shirt from the president of the national federation Jorge Gimémez, this Tuesday.YURI CORTEZ (AFP)

The Venezuelan Football Federation has presented this Tuesday the Argentine coach José Pekerman as the new technical director of the national team. They disembark with him, as part of his team, also Argentine Leonardo Cufré, Francisco Camps and Fernando Batista. “I have no doubt that I am in the right place,” said Pekerman, 72. “We are going to leave our heart and soul to push Vinotinto forward. Hopefully we agree on that illusion of going to the 2026 World Cup. You have to be patient, go in an orderly fashion and correct what is wrong, “he added.

The news of the arrival of Pekerman to Venezuela – a successful coach in the youth teams of his country, and the senior teams of Argentina and Colombia – has been received with some disbelief and joy, and has dissolved the cynicism of the most skeptical analysts. on the future of the Vinotinto. It comes after a long string of failures and with the team already out of the race for the next World Cup in Qatar 2022.

Venezuela, a country in which sports passions tend more towards baseball or basketball, is the only country in South America that has never qualified for a soccer World Cup. After spending decades being the famous “Cinderella” on the regional scene, she began a progressive take-off in the quality of her football starting in 2001, when she left the eternal bottom place in each tie to fight in the middle of the table, scratching the playoff area, led by a generation of footballers led by Juan Arango, Miguel Mea Vitali and José Manuel Rey. The technical protagonists of this jump were the Venezuelans Richard Páez and César Farías.

The most relevant milestone of this growth was the second place obtained in the U-20 Soccer World Cup, held in South Korea, in which Venezuela obtained the runner-up after falling in the final against England. The base of that team, led by Rafael Dudamel, is what makes up the current senior team.

Corruption, improvisation and anarchy in the board of the Venezuelan Soccer Federation began to progressively crack all that had been advanced, particularly after the long-time president of the FVF, Rafael Esquivel, was taken to prison for the international scandal. corruption of FIFA Gate, along with other international football federations.

The worsening of the federative problems in 2018 and 2019 made the collapse concrete and the Vinotinto returned to its usual bottom zone in the South American panorama. In 2020 the interim board of the FVF announced the hiring of Portuguese coach José Peseiro, but he had to resign along with his coaching staff the following year after working without receiving a single month’s pay.

“It is a moment of sadness because you cannot participate in the World Cup, and everyone regrets it, but you can think about what we can do for those who are coming,” said Pekerman this Monday, accompanied by the newly appointed president of the Federation. , Jorge Giménez.

La Vinotinto today has a team of talented and projected young players who had managed to excite the fans before the current disaster, among which the names of Yangel Herrera (Espanyol), Wilker Fariñez (Lens de France), Nauel Ferraresi (GD Estoril Praia from Portugal), Jefferson Savarino (Atletico Mineiro, Brazil), Jefferon Soteldo (Toronto FC, and formerly Santos from Brazil), as well as the experienced Tomás Rincon (Torino from Italy) and Salomón Rondón (Everton, England)

The announcement of the hiring of Pekerman has lowered several links of pressure to the new directive of the FVF. In his Twitter account, Peseiro also confirmed that Venezuela had finally paid him the amounts that were owed, eight months after his resignation: I want to thank the Federation for all its efforts to overcome this situation, and wish it the best of success in the solution of the diverse problems that Venezuelan soccer faces ”.

The Gilinskis go for the GEA: now they want to buy shares in Sura

The Gilinskis go for the GEA: now they want to buy shares in Sura