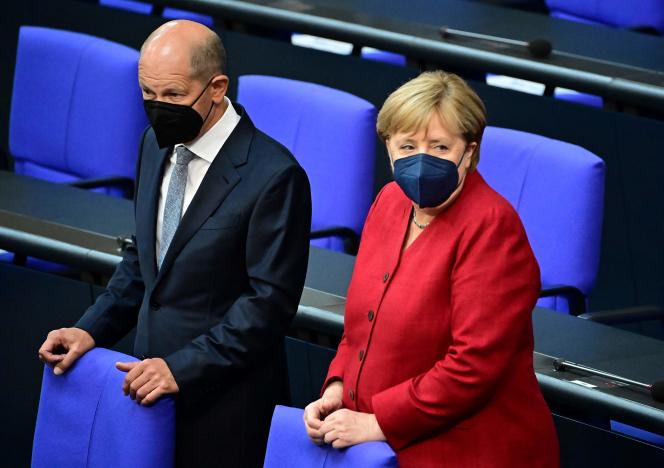 Olaf Scholz and Angela Merkel at the Bundestag, August 25, 2021. They met with the leaders of the sixteen German regions to discuss a possible tightening of restrictions and compulsory vaccination against Covid-19. TOBIAS SCHWARZ / AFP

He has not yet taken office, yet Olaf Scholz, the future German Chancellor, is already in the process of stemming the surge in SARS-CoV-2 infections in the country, where a first suspected case of the new Omicron variant was detected in Hesse.

The one who is to take power in December at the head of an unprecedented tripartite coalition discussed Tuesday, November 30, during a meeting with Merkel and the leaders of the sixteen German regions about a possible tightening of restrictions and ‘compulsory vaccination against Covid-19.

The Bundestag – the German Parliament – will be called upon to vote by the end of the year on a law imposing it on the entire population. “I suggest that (…) the deputies make a proposal [de loi] in Parliament ”on compulsory vaccination, he said in an interview with the Bild TV channel, specifying that this text should be presented“ this year ”for entry into force in February or March.

For Olaf Scholz, unvaccinated people are “the reason for the current problems”. He announces 2G and 2G-Plus all over Germany … https://t.co/vpEl1F119d

The conservative CDU-CSU camp of outgoing Chancellor Angela Merkel, who is about to go into the opposition, now supports compulsory vaccination. According to the daily Die Welt, a large majority of environmental deputies, who will govern with the Social Democrats, are also in favor. Tuesday’s meeting between the federal government, the next coalition and the regions may, however, not lead to any immediate new measures. Another meeting should be organized on Thursday.

Read also In Germany, the SPD, the Greens and the Liberals reached a coalition agreement

A general at the head of a crisis team

Germans wait in front of a vaccination center in Frankfurt am Main on November 30, 2021. YANN SCHREIBER / AFP

Like Portugal and Italy, where two soldiers, Admiral Henrique Gouveia e Melo and General Francesco Figliuolo, led the vaccination campaign against Covid-19, Germany is turning to General Carsten Breuer of the Bundeswehr, responsible for the management of the vaccination campaign. However, many officials believe that the patchwork of rules is confusing and want to standardize restrictions nationally.

About 68% of the German population is fully vaccinated, a significantly lower coverage rate than other European countries such as France, Spain or Portugal. About 10% of the population received a booster dose.

The vaccination obligation was recently decided on for staff in nursing homes and hospitals, as well as soldiers of the Bundeswehr, and should come into force soon. Compulsory vaccination, long rejected by a majority of Germans, is now demanded by nearly two-thirds of them (64%), according to a poll published on November 18 by RTL-NTV. On Tuesday, a new RTL-NTV poll showed that 65% of the population is favorable to a new confinement.

In most of the country, the unvaccinated can no longer access, even with a negative test, shows, restaurants, gyms, and even hairdressing salons. While many Christmas markets have closed in the most affected regions, large gatherings still take place in others. The outgoing government criticized, Monday, the influx of 50,000 supporters in Cologne – often without a mask and little concern for the respect of barrier gestures – for the Rhine derby against Mönchengladbach.

In the morning, the Court of Karlsruhe, the highest German court, whose decision was awaited before meeting, considered justified and proportional the measures taken by the government since the beginning of the epidemic.

The Court considered that the restrictions on contact, exit and school closures “in the situation of extreme risk of the pandemic were compatible with the Basic Law”, in response to an appeal filed several months ago by opponents partial confinement imposed by the authorities, during previous peaks of contamination cases.

Justice thus reinforces the calls to toughen and homogenize at the national level the measures to stem the fourth wave of Covid-19 in Germany. “Every day counts,” Angela Merkel launched Thursday.

“What must happen is absolutely clear: contacts must be reduced,” said the next vice-chancellor, environmentalist Robert Habeck, on Tuesday morning. “The rule” vaccinated cured “must be implemented in a binding manner at the national level for all public institutions”, with the exception of emergency shops, said the co-chairman of the party of the Greens, interviewed by the public channel ZDF. “It is called – it must be said loudly – containment for the unvaccinated,” he added.

The seven-day Covid-19 incidence rate fell very slightly for the first time in three weeks in Germany, data show Tuesday by l’Institut Robert-Koch (IRB). It now stands at 452.2 people infected out of 100,000 during the past week, against 452.4 Monday, which is the first reflux since the beginning of November in Germany.

With 45,753 new cases identified on Tuesday, the daily toll of contamination remains, however, 427 higher than it was a week earlier, but the weekly rate of progression has slowed in recent days.

Read also Article reserved for our Covid-19 subscribers: At the Munich hospital, “we are prioritizing patients, tinkering right to left”

Le Monde with AFP and Reuters