The Committee on Northern Border Affairs of the Chamber of Deputies recognized Dr. Enrique Michel Velasco for his altruistic work in favor of the migrant community of the country.

The president of the Northern Border Affairs Commission of the Chamber of Deputies, Teresita de Jesús Vargas Meraz, pointed out that the recognition was granted to her for her altruistic work, since she has participated in numerous social and professional organizations contributing in countless service tasks. to the community and migrants.

From San Lázaro, the legislator for Morena pointed out that in the northern border area of ​​our country Michel Velasco is joining forces in Tijuana and Mexicali with shelters for migrants and deportees. 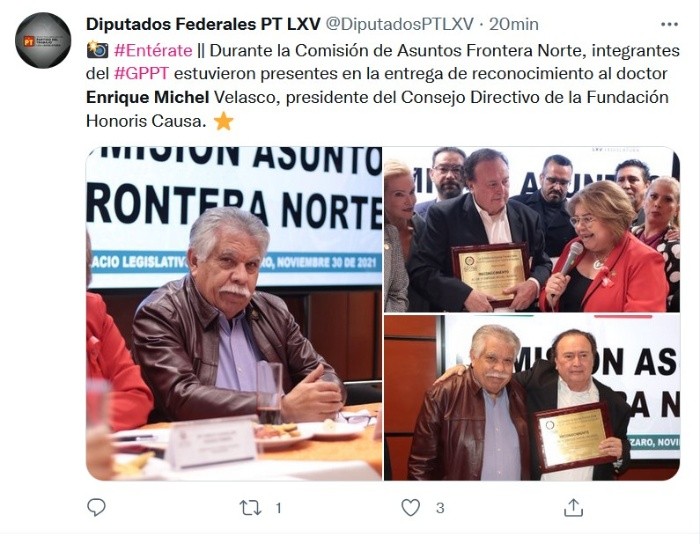 He also pointed out that through its food bank programs it seeks to combat hunger among the most vulnerable groups.

“We give him recognition for the altruistic work he has carried out for many years, since he has been concerned with preserving culture and encouraging creation and entrepreneurship,” he stressed.

For his part, the president of the Board of Directors of the Honoris Causa Foundation, Enrique Michel Velasco, acknowledged his emotion and expressed his gratitude for being recognized by the Congress of the Union.

He promised to continue promoting actions for the benefit of the migrant community and the most vulnerable classes of the country.

“I am moved by this high recognition that the Congress of the Union gives me.”

He reported that he is currently promoting the union between various leaders from all areas of the country to work together and create conditions for the benefit of migrants.

“As a civil society we also have responsibilities in causes for dignity, in full recognition of the efforts of our compatriots who contribute so much to the well-being of the country with their remittances and who never forget their origin, their nationalist spirit, or their patriotic roots”, said.

At Ghislaine Maxwell’s trial, a victim tells how she was sexually assaulted