Bolsonaro and Moro, two sides of the same coin? 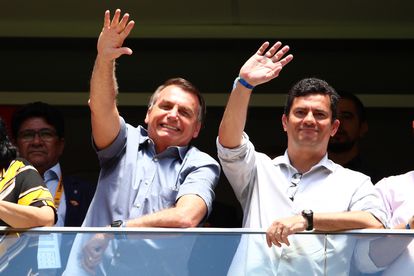 Brazilian politics is in full swing and as the number of hungry people who go to collect food scraps in garbage dumps multiplies, all eyes are on the upcoming presidential elections. Curiously, while every day the number of pretenders to the throne multiplies, the chances of victory and the uncertainty about the new Brazil that may result from the polls are narrowing.

A whole series of imponderables have been crossing the last few weeks and have muddied more if I dig the already choppy waters of the candidates for the presidency. If, on the one hand, new suitors to Bolsonaro’s succession appear every day, on the other, the real possibilities are narrowing.

Two recent developments have brought new unknowns. The appearance in political life of the controversial and enigmatic former judge of the Lava Jato case, Sérgio Moro, and the victory in São Paulo of João Doria in the PSDB primaries that makes him a strong and ambitious candidate called to shake the political waters.

While the caravan of those who intend to contest the elections grows, the candidates with strength and the possibility of victory are narrowing. At this moment, if I had to explain it to a foreigner, I would say that the candidates today undisputed with the possibility of contesting the presidential elections of the dozen suitors with a chance of success are reduced to the fingers of one hand and perhaps less.

The struggle is getting closer every day because the polls are announcing that Bolsonaro’s force for reelection is crumbling with less approval every day and a greater rejection of his government. At the same time, the only one who stands firm as the winner in all the polls is former President Lula, who could beat him even in the first round. Lula could choose as his vice president Alckmin, one of the PSDB’s historical figures today in an identity crisis, and thus become at the same time a candidate from the center who reassures those who still see him as a friend of leftist dictatorships.

All this without counting the arrival that scares everyone of the former Moro judge who appears, as in the story of the god Janus of the Romans, that of the two faces and two doors, as a double of Bolsonaro in substance, although totally different in the form, which could make it pick up the orphan inheritance of the less fanatical Bolsonarism, even of the business world tired of the captain’s crude way of governing.

Today the president and Moro are two curious characters, because in appearance they could not be more different and in substance they could be more alike than you might think. Both are from a hard extreme right but appear as two extremes which can confuse not a few. While Bolsonaro is an apprentice of fascism, scattered, without culture, unpredictable, bad spoken and even vulgar in his expressions, all of them marked by a strong sexual accent from a periphery bar; Moro, in reverse, from his way of dressing to his movements and words is content, rather refined, it is difficult for him to laugh, he hides more than he reveals, but he can end up being as much or more dangerous in terms of authoritarianism and an apparent lack of feelings.

No, the Podemos party, which has embraced him politically in its bosom, is trying to make a metamorphosis of him that goes from dressing, abandoning his tie and dark suits and appearing smiling. Moreover, every day it reveals more that it tries to supplant Bolsonaro as a myth, even as a call by God. As he himself has confessed, his entry into politics has been “a mission”, something that amounts to a divine call to end the two extremes that are currently vying for power: the extreme left and the extreme right.

If the scattered and histrionic personality of the retired captain is already known and even rejected every day more for his excesses of bad taste and his vocation to authoritarianism and violence, that of Moro is yet to be discovered. Unlike Bolsonaro who does not hide anything and even confesses that he locks himself in the bathroom alone to cry or boasts that some nights he makes a gift to his wife, Moro is closed like an oyster. It is enigmatic. Perhaps tougher and more authoritative than the captain, but also more rational, more disguised, capable of hiding more surprises.

Perhaps for all this and in view of his first reactions as a politician, he begins to impose himself as a dangerous and complex piece called to stir the waters more than many expected.

Today Brazil meets the Moro implacable judge, almost insensitive, whose hand did not shake when it came to taking the most popular former president in the history of Brazil with great global projection to prison and keeping him in it for almost two years. What is still unknown and can only be seen in the coming months is its political strength. If he will be able to appear tough, as he is, and at the same time more reliable than Bolsonaro in maintaining democracy. Whether or not he will be appreciated either by the more favored classes who know very well that he is a liberal in economics and a convinced right-wing, than by the popular masses who today are starving to those who have already begun to present themselves as bearers of a “mission.” . Mission that is not difficult to interpret that it is something of a religious stamp and a first nod to the mass of evangelicals who believed that Bolsonaro was sent by God, saved from death in the still dark attack during the electoral campaign that gave him the triumph.

If at first the arrival of Moro to politics was seen as a joke that would end up bursting like a soap bubble, today, a few weeks later, it is already beginning to be seen as a key piece in the presidential chess. There are those who try to minimize their political presence that will end up extinguishing itself. Others, however, of the old politics, accustomed to navigating in the dark and troubled waters of public life begin to fear that the arrival of the former judge, whose hand never trembled when condemning, could end up raising at least one dangerous storm in the sea every week the country’s most agitated.

What this country needs is someone with the ability to save it with the weapons of democracy and illusion, from the hell into which the extreme fascist right of a president has dragged him, not only discredited internationally, but considered psychically incapable of driving. to a country of the economic, political and social magnitude of Brazil.