Where is Eric Zemmour with justice? 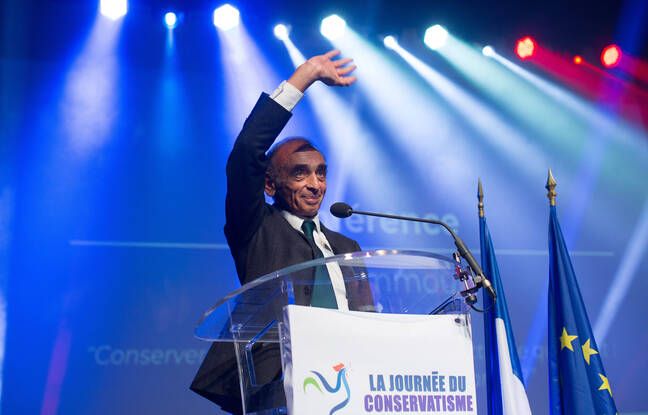 “The disappearance of our civilization”, immigration, “Islamogauchism” … In a dramatic video, the former journalist and far-right polemicist, Eric Zemmour, formalized his candidacy for the election on Tuesday presidential election of 2022. In this ten-minute speech with more Trumpian than Gaullist accents, he affirms that he is standing by universal suffrage “so that our daughters are not veiled and our sons are not submitted”. A program that has been running for a decade on television sets. Foreigners and Islam are indeed part of his obsessive themes, which has led him to be sued on several occasions. And twice to be condemned.

His last appearance dates back to November 17. Absent that day in court, Eric Zemmour was on trial for his controversial remarks on unaccompanied minor migrants. During a debate on CNews on September 29, 2020, after an attack in front of the ex-locals of Charlie Hebdo, the columnist said: “They have nothing to do here, they are thieves, they are murderers, they are rapists , that’s all they are, you have to send them back and they don’t even have to come. “It’s a permanent invasion,” he insisted.

About thirty associations and twenty departmental councils had become civil parties. For the prosecutor, “the limits of freedom of expression have been crossed”. At the hearing, the magistrate demanded a fine of 10,000 euros against her, with the possibility of imprisonment in the event of non-payment. The court’s decision has been reserved and will be rendered on January 17.

It was not the first time that the polemicist slipped on a TV set. On March 6, 2010, invited to participate in Thierry Ardisson’s radio program Salut les Terrens on Canal +, he asserted that “most traffickers are black and Arab. It is like that, it is a fact ”. The same day, he added on France Ô that employers had “the right” not to want to recruit Arabs or blacks. Prosecuted by several anti-racist associations, he was sentenced in this case in February 2011 to a 2,000 euro suspended fine for provoking racial hatred. This conviction is final since he did not appeal the decision.

Six years later, rebelote. On the set of C à vous, on France 5, Eric Zemmour declares that France has lived “for 30 years an invasion” with, in certain suburbs, a “struggle to Islamize a territory”. He also believed that Muslims should be given “the choice between Islam and France”. The Court of Appeal ruled in May 2018 that these two passages “targeted Muslims as a whole and constituted an implicit exhortation to discrimination”. She sentenced him for inciting religious hatred to a fine of 5,000 euros. His cassation appeal is dismissed, the penalty is therefore final. However, in 2019 he seized the European Court of Human Rights (ECHR), which has not yet examined his request.

A case is still ongoing. During a “Right-wing Convention” organized by relatives of the former National Front MP Marion Maréchal on September 28, 2019, Eric Zemmour gave a speech lambasting “colonizing” immigrants and an “Islamization of the street” . The journalist also described the veil and the djellaba as “the uniforms of an occupying army”. Prosecuted for “insult and incitement to hatred”, he was sentenced at first instance to a fine of 10,000 euros. But on September 8, 2021, he was released by the Paris Court of Appeal. The general prosecutor’s office and the anti-racist civil party associations have lodged an appeal in cassation.

Eric Zemmour was also released in other cases brought to court. In June 2016, the Paris Court of Appeal confirmed the release of the columnist who was tried for incitement to racial hatred and defamation. In question, a chronicle of 2014 on RTL where he denounces “the bands of Chechens, Roma, Kosovars, Maghrebians, Africans who rob, violate or rob”. The criminal court had already acquitted him in September 2015 on the grounds that the affected communities were not as a whole.

In October 2014, in an interview with the Italian daily Il Corriere Della Sera, he said that Muslims “have their Civil Code, it is the Koran”. Tried for inciting anti-Muslim hatred, Eric Zemmour was sentenced at first instance to a fine of 3,000 euros. The judgment was confirmed on appeal in November 2016. But the Court of Cassation having quashed his conviction, he was retried. And this time, he was released on a legal issue, the president considering that “it is not proven that Eric Zemmour, prosecuted as an interviewee, knew that this newspaper was published in France” and that “his comments would be broadcast in France and on the Corriere della Sera website ”.

There are the upcoming trials involving the new presidential candidate. In December 2020, Eric Zemmour appeared for “contestation of a crime against humanity”. Faced with the philosopher Bernard-Henri Lévy, he affirmed in 2019 on CNews that Marshal Pétain had “saved” the French Jews. In February 2021, the court released him because his words were pronounced “point blank during a debate on the war in Syria”. The civil parties appealed. A new hearing is due to be held in January 2022.

Eric Zemmour will have other opportunities to return to court next year. He must also be tried for having qualified the first name of the chronicler Hapsatou Sy as an “insult to France”. The latter had lodged a complaint for “racist insult”. He must also appear in October 2022 for “racial insult” against the deputy La France Insoumise Danièle Obono, indicates
France Inter.

Finally, the far-right candidate has filed several lawsuits against newspapers. His lawyers recently announced their intention to sue the magazine Closer which claims, in its issue published last Friday, that his advisor Sarah Knafo is expecting a child from him. Mid-October, Eric Zemmour had already sued several magazines for invasion of privacy, including Paris Match, which made its headline at the end of September on “his very close advisor” Sarah Knafo, and Here, for photos and an article relating the proximity between the two.

Emma Coronel: What was the last photo of “Chapo” Guzman’s wife on social media?

Emma Coronel: What was the last photo of "Chapo" Guzman's wife on social media?