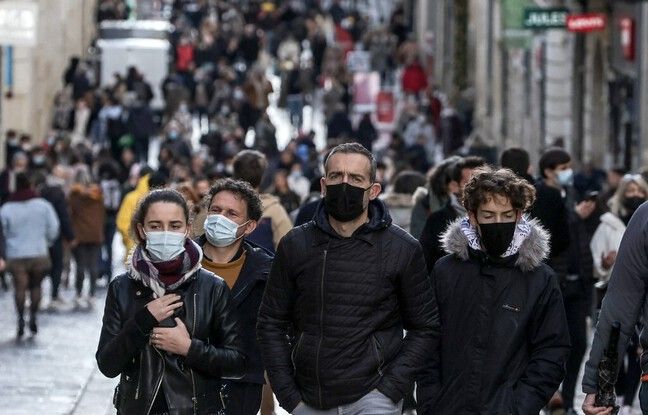 Happiness is disturbing in that it is sometimes very fleeting. And the French economy is undoubtedly preparing to draw the hard lesson from it. This Tuesday,
INSEE confirms the excellent third quarter of 2021, with one of the highest growth rates over half a century: + 3%. But no time to uncork the champagne when the first signs of crumbling are already appearing. In October, household confidence fell below its long-term average, due to runaway inflation, according to INSEE. And since this first slowdown, the fifth wave has swept over France and the Omicron variant, considered “extremely worrying” by the World Health Organization, is now knocking on the door.

At the announcement of Omicron, the world stock markets completely unscrewed on November 26 – including Paris, by 4.75% – borders were closed, while some countries have put in place health restrictions. What put a brake on the French economy?

For Pascale Hébel, director of the Consumption and Business unit at the Research Center for the Study and Observation of Living Conditions (Credoc), these two bad news on the coronavirus front (the fifth and Omicron) should at least change our behavior over the next few weeks: “There will probably be fewer restaurants, fewer bars, less travel. And above all less travel ”.

If the French maintain sufficient confidence in the future, believing that it is only a passing bad period, it is possible that this money saved will be spent elsewhere. “This is particularly what we saw during Christmas 2020,” notes the director. As the French could not go to restaurants or move around, they bought very expensive food products and enjoyed themselves as gifts. “

Another behavior to come in the event of a strong epidemic wave, households will prefer to place their order on the Internet rather than in stores among a crowd of other people. Here again, this is not necessarily bad news: “Since the start of the health crisis, there has been an awareness of the problems of our dependence on other countries, and the population is trying to consume more Made in. France, even on the Internet ”, supports Sonia Bellit, economist, specialist in the consequences of the coronavirus on the economy and project manager at the Factory of Industry.

The fifth wave and the Omicron variant could impact France indirectly, via abroad. Several countries have put in place, as has been said, health measures. Above all, China has already embarked on a “zero Covid” policy on its territory. Whenever cases are detected in a region, the surrounding area is totally confined, even if it means closing factories for weeks. Such a policy should increase with the fears surrounding the new variant. “This could lead the French industry to supply problems,” warns Sonia Bellit.

But after five waves, French companies are starting to be used to this kind of problem, and some have adapted. A quarter of French industries say they have started to relocate their production, according to Sonia Bellit, when others have made reservations. What to reduce the negative impact.

Exports could also be affected by a drop in international trade. A problem which could, here too, be partly offset by “French solidarity” via Made in France.

Finally, the crisis could contribute to the increase in prices and inflation, due to difficulties in the supply of raw materials, a source of concern for French households from October.

Cruelty of the coronavirus, it is always the same sectors that clink glasses. Same causes, same victims. For the catering, hotel industry, aeronautics sector, events, difficult weeks are probably to be expected, warn the experts, especially if restrictive measures begin to be put in place in France with almost 50,000 cases per day. this Tuesday.

Contrary to the previous points, it is difficult to imagine how these sectors could compensate for their losses. Only state intervention, through massive aid, should once again make it possible to keep them going. Hoping that the misfortune, too, is ephemeral.

AMLO affirms that there are enough vaccines for “one, two and three doses”

AMLO affirms that there are enough vaccines for "one, two and three doses"