On the nightstand of Jimmy Danilo Acosta (23) rests The Republic, by Plato, marked on one of the first pages. “I borrowed it without permission from the library,” he excuses himself with a laugh. “But a person who steals a book, is he someone wise or bad?” Thanks to ethics, he says, he learned to listen. “If someone comes to criticize me, I give them all the attention in the world and then I answer: Do you know where I come from?”

In his neighborhood, La Fortaleza, on the Colombian border with Venezuela, a few years ago, due to a similar situation, “you died stabbed or your gun was taken from you.” Acosta has been promoting other types of dynamics for almost five years so that the fur learn about human rights, peace and dialogue, in what was one of the most forgotten and bloody communities in Cúcuta. The next objective: “Finish the book and return it. This one, and another from Karl Marx ”.

The young man’s family changed cities four times as a result of the armed conflict in Colombia. First in the department of Vaupés, bordering Brazil; then they reached the Guaviare; then to Villavicencio and, finally, they moved to Cúcuta. They have been neighbors of this community since he turned 11 years old. Accustomed to leaving everything behind, he grew up with his parents’ noise so that he would “not get into trouble, like his brother.”

And it is that the second of the seven children has been imprisoned for several years, after “misunderstandings” with the gang that recruited him. “It is very easy to get carried away and fall into the rogue when there are no other options, no leisure ”, ditch. And he knows of what he speaks. He also entered the circle of drugs and crime. “I am not proud, but I have changed.” An Unhcr workshop has a lot to do with this shift in attitude. 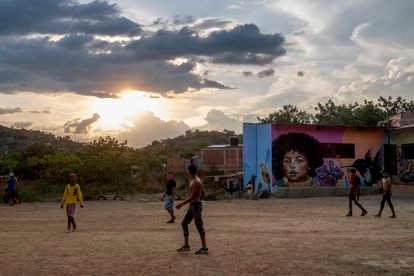 In 2014, the United Nations High Commissioner for Refugees (UNHCR) inaugurated a project called Rumbos de Paz, which fostered the leadership of young people committed to healthy leisure and development. Although Acosta didn’t get much appeal at first, he ended up going. They did various dynamics linked to urban art, music and rap. The latter, one of their hobbies: “It was the best decision of my life, because they supported me to go back to school. And I learned from perseverance and respect for others and I was able to share my art ”. This is what he now replicates with a group of young people who have been following him.

The youth plan in the neighborhood began to change. The hangouts no longer involved fights or drugs. They founded the New Adolescence Cycle Corporation in 2017, which is not officially registered so far. There were 12 leaders and 134 participants. They got together to clean the soccer field, they raped, they watched movies, they gave courses of dance therapy and reggaeton and bachata meetings … “I organized them but I was one of those who sat down to see how others danced,” he laughs. The lack of commitment made part of this group disintegrate. The pandemic did not help.

The challenge now is to bring the group back together. “We are seeing each other to see our mission and we are learning law 743 well (on community action boards, the rights and duties of leaders). We want to analyze what we did wrong and why we collapsed ”, he explains.

Training young leaders becomes a protective ring against the set of risks they face in the communities: recruitment, youth pregnancy, consumption …

Ayuda en Acción is the organization that is supporting this type of organic leadership in the communities. For Orlando Ortiz Medina, director of the impact team and coordinator of the entity’s programs in Colombia, young people are a fundamental piece precisely because they are “in the midst of building their scales of values”: “Training and strengthening them to assume these roles it becomes a kind of protective ring against the set of risks they face — recruitment, youth pregnancy, consumption. A young leader is a catalyst for their environment, usually through artistic, cultural and sports activities, which are the ones that motivate them the most and attract their attention ”. Thus, they affirm, the changes begin. 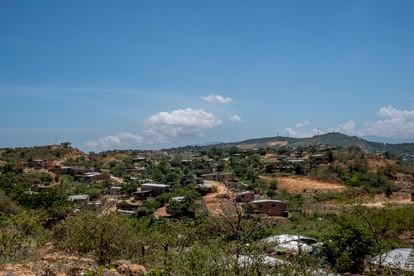 “I’ve been training to be a good leader for a long time,” Acosta says firmly. “I have initiative, potential, I understand that there are difficult moments … It is not an easy task, but if I give up it doesn’t make sense. Neither for me nor for those who follow me ”, he says. “I lost many opportunities when I used coca and marijuana. I understand what it is to be hooked, but we are going to come back stronger and find other boys to qualify them as they did with me ”.

The replication of the learning of other facilitators in the territory is also the objective of the NGO. “We can legalize the organization for you, we pay for it,” explains Angie Colmenares, head of the project. “But beyond legally establishing you, you have to strengthen the organizational form that you already have.” He nods attentively, his eyes full of ambition as if making a mental note of the next steps.

With the work of Socrates’ pupil in hand, he enunciates a piece: “Having wealth in old age is better because it is not feared, even if one has not paid the debts before dying. Nor has he stopped making sacrifices to the gods ”. Stop and clarify: “In quotes, because there is only one God.”

This tan-skinned young man has a thirst to learn from a child whose right was stolen. His first childhood memories are linked to taking care of the pigs and chickens on his father’s farm and doing housework. “I was not gambling and I left school early to start the coal mine. But now I aspire to something much bigger ”.