The last chance for the truth in Mexico 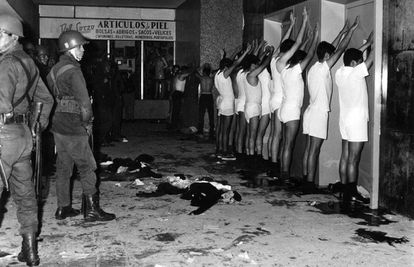 University students guarded by the police in Tlatelolco in October 1968.

Half jokingly half seriously, historian Aleida García, a member of the recently created truth commission for the dirty war, defends the theory that “the Mexican bureaucracy prevented the country from experiencing a dictatorship.” It sounds like a joke, but it gives an idea of ​​the type of knots that the state apparatus generates, often in self-defense. The academic’s hypothesis comes into play due to the possible opening of archives in the framework of the commission’s investigation, which is now beginning. For her and her companions, it is the last chance to illuminate the truth of a time that is still in darkness.

Born in October, the “Commission for Access to Truth, Historical Clarification and the Promotion of Justice for the serious human rights violations committed from 1965 to 1990” is the latest commitment of the Government of Andrés Manuel López Obrador in the field of historical memory. In the image of the commissions that existed in Uruguay, Argentina or Ghana, the Mexican will try to understand the size and density of the counterinsurgent spider, as ubiquitous as it is elusive, part of the state that led the PRI for decades.

Much has been written about this period, about the State intelligence services, the fearsome Federal Security Directorate, the pax priista, the social movements of post-revolutionary Mexico and their heirs, the political awakening of the 1960s and 1970s, the Party of the Poor in the State of Guerrero, Lucio Cabañas, Tlatelolco and the great and symbolic repression of October 2, 1968 … Of some episodes, the case of the latter, a lot is known, as explained by the historian Eugenia Allier, a member of the Commission. But the opening of some historical archives, unknown until now, could complete the panorama and illuminate unknown situations. To date, Mexico does not have an official number of persons who have disappeared, executed or tortured by agents under the protection of the State.

In addition to García and Allier, the historic activist from Guerrero Abel Barrera, the political scientist and expert on relations between Mexico and the United States, Carlos Pérez Ricart, and the former priest and human rights defender David de Jesús Fernández are members of the commission’s group of experts. . Representatives of the Ministry of the Interior, Foreign Relations, Finance and other agencies complete it. In the last two weeks, the five experts, the spearhead of the commission, have met several times to try to organize the coming months, logistical and budget issues, but also the division of labor.

In conversation with EL PAÍS, García, Allier and Pérez Ricart insist on the idea that it is a great opportunity to delve into the memory of the state. Although it is not the first attempt, never before the conditions, they say, were better. After decades of PRI governments, the victory of Vicente Fox in 2000 and the arrival of the National Action Party to power opened the ban. The past was debatable, prosecutable, that was at least the idea. The problem is that the initial impulse was short-lived. Fox created a prosecutor’s office to investigate dirty war crimes, but no conviction was obtained. His government did not even obtain a report on what happened in the decades of repression, a document, something to hold on to.

The idea of ​​the commission now is that its efforts are reflected in a report that serves as a starting point for further efforts, a zero kilometer of the government study of state repression. “There are still victims and perpetrators who are still alive and this is the last opportunity to interview them,” says Pérez Ricart.

For commissioners, access to previously hidden files is key. Each one of them indicates one in particular, that of the Presidential General Staff of the Secretariat of National Defense, dissolved by the current Government. “For me it is the most important file,” says Allier. “It would help us shed some more light on Tlatelolco. If we now have 90%, this would complete ”, he adds. “The National Defense archive is hyper-necessary because of what it can represent in terms of historical research and because of the symbolic power of opening it,” García argues, “although it seems difficult to me that we can enter the military archive unrestrictedly.”

For Pérez Ricart, the commission’s work is also an opportunity to insist on the search for the archives of the Federal Judicial Police, the old investigative arm of the defunct Attorney General’s Office (PGR). “I have been looking for it for 10 years and it is not in the General Archive of the Nation, anywhere I have searched. It is not public at least. It was the operational arm of the PGR and there is no archive of that structure! We are going to try to find it. I am convinced that what we know about human rights violations in that period is only the tip of the iceberg, precisely because we do not have this, “he says.

All three agree on the need to draw the paths of the “criminal and counterinsurgency circuits”, networks of agents within different dependencies of the State that repressed dissident movements in one or several regions at the same time, through different practices, such as torture or disappearance. forced, over time. “It is worth doing a diagnostic work the first months to identify these circuits,” says García. 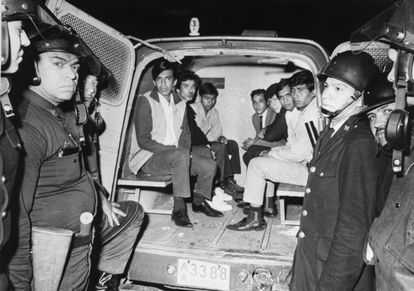 Police captured a van full of students after searching all the buildings in Plaza Tlatelolco on October 3, 1968.Bettmann (Bettmann Archive)

All also point to the need to transcend the classic idea of ​​repression, linked to dissident political movements, especially to the left of the Government. “We want to see other types of state violence, in terms of gender, sexuality, non-political or not obviously political violence,” explains Allier. “Foucault would say that everything is politics, anyone would. And yes, but it is true that there were disappearances, sexual torture, executions, for reasons not strictly political. Disappearance of suspected criminals, criminals, addicts, drug traffickers, for example. At a time when there was no independent journalism or civil society organizations, the police and the Army disappeared and executed. These people do not have groups that represent them. They have been canceled from memory exercises ”, adds Pérez Ricart.

Pérez Ricart, who has studied the presence of US counternarcotics agencies in Mexico during the 20th century, has written that the head of the FGR, Alejandro Gertz, coordinated the government’s efforts to eradicate illicit crops in the 1970s. In other words, Gertz was part of a unit designated for hosting those counterinsurgent or criminal circuits that they speak of. Is your role relevant then in the will to help of the current FGR? “It’s interesting that Gertz presence there. It remains to understand its role. It is true that he is judge and party. It would be a mistake to make it obvious because then maybe I would not have an interest in helping ”, ditch.

Weather in El Salto today: the forecast for Tuesday, November 30, 2021