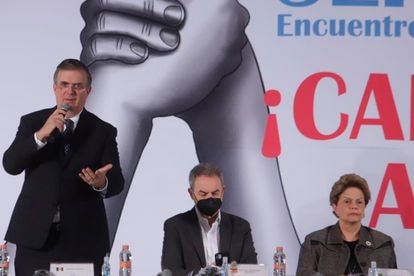 Foreign Minister Marcelo Ebrard with José Luis Rodríguez Zapatero and Dilma Rousseff, this Tuesday at the meeting of the Puebla Group Courtesy of the MX Chancellery

If the fight against inequality is the priority objective, the path goes through propping up an alternative model to neoliberalism and the propagation of far-right proposals in Latin America. It is the premise that this week brings together more than 150 Ibero-American progressive leaders in Mexico at the Puebla Group meeting, including several Argentine and Bolivian leaders, ministers and former presidents such as the Spanish José Luis Rodríguez Zapatero, the Colombian Ernesto Samper, the Ecuadorian Rafael Correa or Brazilians Lula de Silva and Dilma Rousseff. The forum, which is held for the first time in a blended way since March 2020, coincides with the halfway point of the mandate of Andrés Manuel López Obrador and seeks to define a development plan to alleviate the onslaught of the coronavirus pandemic in the name of social justice .

The Mexican Foreign Minister, Marcelo Ebrard, host of the meeting, has summarized some common purposes “What essentially unites us? Hope unites us. In what? In which we build free, just, egalitarian societies; never resign ourselves to inequality. We are committed, committed to giving a response to the exhaustion and the great resounding failure of neoliberalism in our continent and throughout the world, “said the Secretary of Foreign Relations, who has transferred” the affection “and” gratitude “of the president. Ebrard has influenced his intervention in one of the axes of the so-called Fourth Transformation, his political project, and has called to deepen the fight against corruption. He has also proposed, in line with what López Obrador expressed in the UN Security Council, to collect 4% of the profits from large corporations, redistribute 2% of the Gross Domestic Product of the G-20 countries and put I stop the arms trade. “We have never resigned ourselves to cynicism, cynicism has always been conservative,” he said.

Zapatero has also addressed the possibility of placing a limitation on wealth to achieve more sustainable societies and has rejected, against the battle that the European extreme right, especially Spanish, seeks to wage in Latin America, that the region’s problem is the ghost of a supposed communist threat. On the contrary, in his opinion the instability is related to the lack of institutional response to the problems of inequality and corruption. Colombian Samper has asked to go beyond the proposals and build a “way out of the fascist landing in our America”, alluding to the second round of the presidential elections in Chile and the concern for the victory of the far-right José Antonio Kast.

Alberto Fernández has intervened by videoconference from Buenos Aires to highlight the need to “continue working so that social justice, once and for all, prevails”. “If after everything that happened to us, the only thing we are going to do is repeat history again, then we will not have learned anything and future generations will remind us that we have failed them,” he added, also referring to one of the messages. which leaves the spread of the omicron version of covid-19. Africa, he said, “is left to its own devices with vaccines, facing a new variant that puts the entire international system in check again.”

The Puebla Group, a forum created in the Mexican city in 2019 and coordinated by the Chilean leader Marco Enríquez-Ominami, is also debating these days about new technologies in political action, the media and “the use of the judiciary as weapon of political persecution ”. That is one of the battles of former Ecuadorian president Rafael Correa, who since leaving power in 2017 has faced several processes that he considers a revenge for subsequent governments.

Jalisco Congress: With reform, they seek to improve the quality of life of patients with type 1 diabetes

Russian monk who denied existence of coronavirus will go to prison

Russian monk who denied existence of coronavirus will go to prison