Pay off debt with eight months of tips as a “cerillito”

The integrity of a low-income person surprised in the first place to the owner of a beauty salon in Nuevo Laredo, and later to social networks after the way you paid off a loan became viral, then working as a “cerillito” he managed to gather the amount needed in eight months.

It was on November 27 that the user Mechas Lupita Santos shared on Facebook a couple of photographs showing low denomination coins stacked, accompanied by the text that quickly made his story viral: “They say that when you do something with your right hand, your left hand does not know it … But this is to be admired,” he says.

As reported by Lupita, a few months ago this person had come to her to borrow money, explaining that he would pay the fifteen hundred she requested in a certain number of months; “He told me to lend me 1,500 I pay them in 8 months”, a situation that he considered sincere and that in his disinterest he had completely forgotten.

The resources were obtained from tips that for eight months he was receiving as a “matchstick” or packer, and although he did not disclose the identity of the person, she said moved by the gesture: “And he came very early and paid me the 1,500 so with pure coins I wanted to cry because there are still people who really value what a loan is” (sic), concludes the user in her publication, to which other users immediately reacted and that they began to share, making it viral.

“When the desire to pay is sincere, it does not matter how they do it in payment or so, but it is to be admired, many forget that you held out your hand one day,” applauded a Facebook user, agreeing with many that that person deserves all the recognition for the way in which he paid off his debt to whoever helped him a few months ago. 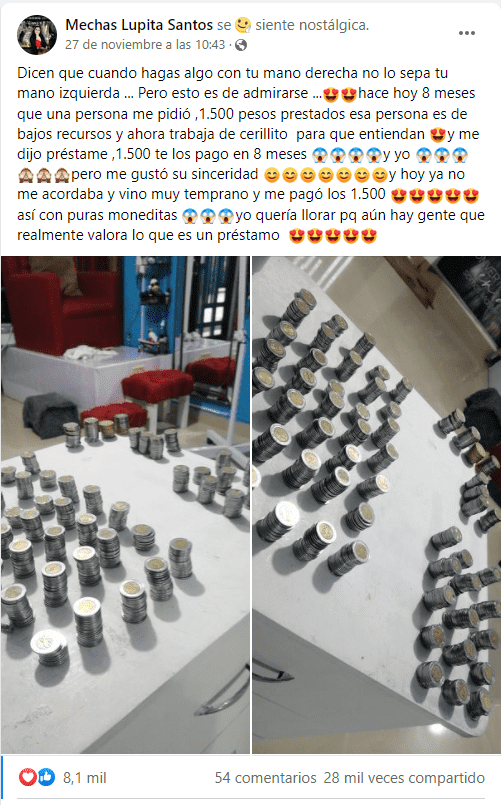