Notre-Dame de Paris: the interior design project of the cathedral is debated 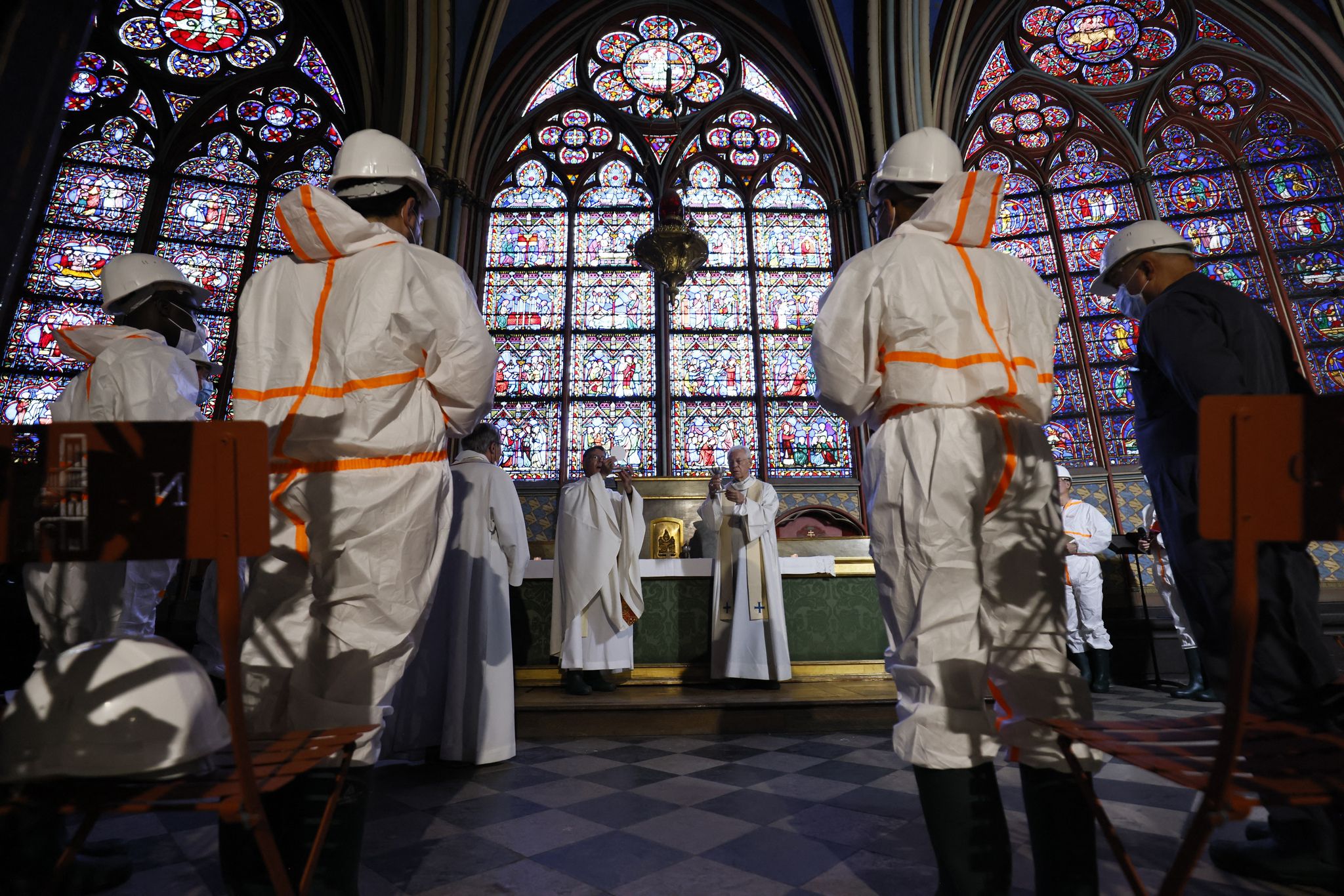 The whole world keeps in memory the images of the spire of Notre-Dame collapsing in the blaze on the evening of April 15, 2019. While the phase of securing the building was completed last summer and the restoration can begin, the diocese of Paris will soon present its interior design project to the National Commission for Heritage and Architecture, (CNPA)

Father Gilles Drouin, director of the Higher Institute of Liturgy of the Catholic Institute of Paris, received in June 2019 the mission of proposing a new interior layout for the cathedral. His job is to return the building to worship following the fire, and to improve the reception of the public as well as the presentation of works of art, questions prior to the drama.

→ THE FACTS. Notre-Dame de Paris: a piece of oak used for reconstruction offered to the Pope

The choices were made in pairs, in order to combine a pastoral perspective with a heritage perspective. The project took shape with the help of architects, light and sound specialists, scenographers and artists. In a third phase, the hypotheses were submitted to heritage professionals. “Each step has been validated by Mgr Michel Aupetit, Archbishop of Paris,” says Father Drouin.

The nave, place of the liturgy

At the request of Bishop Aupetit, Gilles Drouin worked on the space of the faithful, the nave, as being a liturgical space, refusing to “treat the choir as a theater stage”. As it stands, the proposal includes a monumental baptistery placed at the entrance to the cathedral. Benches “carriers of light” will provide a soft light coming out of the shadows of the assembly.

→ EXPLANATION. At Notre-Dame, a new liturgical arrangement to better welcome the faithful and visitors

A device which further integrates the faithful into the celebration and will avoid transforming the cathedral into a “performance hall”. This lighting of the nave would emphasize the axis of the cathedral, from the baptistery to Couturier’s cross of glory which dominates the choir and which withstood the fire.

It is also in the nave that the “Mays of Notre-Dame” should take place, these large paintings offered to the cathedral in the 17th and 18th centuries, and returned in situ since the Second World War. These works, kept in the side chapels until the fire, would thus find a presentation closer to their original layout, and a better exhibition. If the space was designed to meet the needs of the liturgy, it was also designed for better access for millions of tourists.

“The reception of the public was deficit, logistically and pastorally”, underlines Father Drouin. The public entered through the south portal and came out to the north, contrary to medieval logic which led the faithful from shadow to light. Visitors will now enter through the central portal, discovering the axis of the great nave. By taking the north aisle, they will be able to follow a catechumenal route.

Father Drouin specifies: “It will not be an educational itinerary, just the proposal of experiences through beauty. “For this, existing works will be called upon, such as the superb 14th century sculpted choir enclosure, or the collection of old paintings. In echo, “works of today”, paintings or tapestries, will be ordered. For Father Drouin, the video projection or insertion into the contemporary work of biblical quotes would allow the discovery to be deepened.

The side chapels will be the privileged space of this thematic route. Soberly painted by Viollet-le-Duc in the 19th century, sometimes stripped a century later, when the fashion for exposed stone triumphed, these chapels were generally neglected, sometimes cluttered with poorly lit paintings and without concern for consistency. The development of the route should allow a more coherent visit.

The reactions were lively from the first reflections on the restoration of the cathedral. On several occasions, specialized media have expressed concern, both in France and abroad. The interior design project carried out by the diocese in turn raises some concerns. In the diocese, among Catholics, voices are raised, calling for a better diffusion of the stages of the project, a possibility of discussion, and a “maximum humility” in front of the work of the centuries. Some ideas are shocking: projecting Bible verses in different languages ​​would be the “Disneyland effect”, for some.

→ THE FACTS. Notre-Dame de Paris: a call for funds for interior fittings

Faced with criticism, Gilles Drouin readily acknowledges that intermediate working documents, which are now completely obsolete, are still circulating, and may wrongly fuel some fears. Thus, there was never any question of painting contemporary frescoes in the side chapels.

The controversies aroused demonstrate the extreme attention of the faithful to the development and future of their cathedral. December 9 will be an important milestone: the CNPA will give its opinion on the project. For the diocese of Paris, the work of reflection is not yet complete.