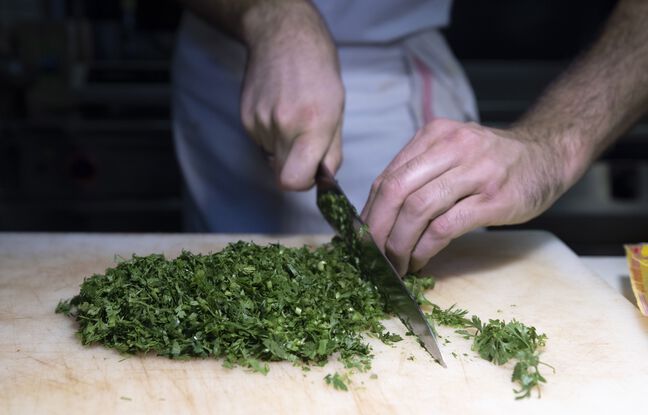 The gastronomic know-how is perpetuated perfectly with the Roellingers. The Gault et Millau guide on Monday consecrated Hugo Roellinger “cook of the year”. Alchemy of the sea abyss, the plates of Olivier Roellinger’s son tell the story of Cancale bay.

“It’s a great surprise, a great reward for me, my family, my teams and for all the people who revolve around the restaurant”, welcomes the chef of Le Coquillage, a 1920s villa overlooking the Emerald Coast. , the mirrored Mont-Saint-Michel.

As with the announcement of his second Michelin star in 2019, the chef with long hair keeps a cool head and “does not run after prices”. “I try to transcribe with simplicity and sincerity the beauty of a territory on a plate. This kitchen cannot be transported elsewhere, ”insists the 33-year-old Breton.

The estate’s seven hectares of land constitute for him a veritable pantry: Celtic vegetable garden where 70 varieties of aromatic plants grow, apple trees conservatory with 26 endemic varieties, algae cellar, all facing an azure sea. “The more he advances, the more Hugo feels free to offer cuisine that is close to his heart, instinctive, organic, natural”, testifies his wife Mathilde. “It’s not a job, it’s a life. We spend all our time there, we put all our heart and energy into it, ”adds the one who hung up her lawyer dress for love.

Beginnings in the merchant navy

Before announcing in 2012, on a station platform, his intention to cook to his father Olivier, a monument of international gastronomy, Hugo wiped the spray from the four corners of the planet as a merchant navy officer. “I wanted to know the color of the water all over the world, the port ambiences, the excitement of finding land after a month at sea”, he confides.

And then one day, at the age of 24, he decides that he has the cooking virus like his father, three-star chef and cook of the year 1994. The latter had nevertheless advised him against following in his footsteps. “Its culinary expression is shellfish and crustaceans. Hugo has found the backbone of his cuisine through the broths of seaweed, spices and vegetables, and puts marine and spicy flavors at the service of the vegetable “, now explains Olivier Roellinger, deeming this cuisine” poetic and radical ” .

Difficult to make a name

Committed to ecology and the preservation of resources, Hugo Roellinger obtained the Michelin green star in 2020, a distinction which rewards sustainable initiatives in gastronomy. In his eyes, the chef of 2021 must also ensure the well-being of his team’s work, especially since cooking is for him a collective work. And his father admiringly admits: “I told him that in this job, it was very difficult to make a name and even more a first name. He succeeded in a few years ”.