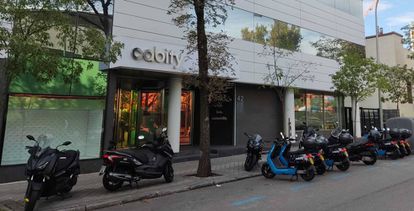 Mobility habits in cities have been transformed by the pandemic. With teleworking and the occasional closure of leisure areas, travel was reduced. However, easing of restrictions has seen urban mobility rebound, and confidence in transport applications has strengthened. This is the conclusion reached by Cabify, which has already exceeded globally the volume of trips registered in 2019. The Spanish mobility platform, which has just celebrated the tenth anniversary since its foundation in Madrid, expects its revenues to exceed at the end of the year the levels prior to the pandemic, and it expects to be profitable again in December, although it estimates losses of around 14 million in the whole of 2021.

Cabify was the first Spanish application to make a strong breakthrough in the licensed vehicle (VTC) sector. In 2012, the year after its creation, it expanded to Latin America, where in 2017 the integration with the Brazilian Easy Taxi service began. “The public transport structures there were not as developed as in Europe, so the private vehicle was much more necessary,” said the founder and CEO of the company, Juan de Antonio.

After resuming its activities, Cabify has quickly jumped on the recovery train. According to the forecasts advanced this Tuesday, the firm will close the year with global revenues above 500 million dollars (440 million euros), 45% more than in 2020. In addition, in the last quarter of 2021 a Turnover of 167 million dollars (147 million euros), exceeding the figure generated in the last quarter of 2019, which had been the best in the history of the company.

This year, the 230,000 drivers and taxi drivers with whom the company collaborates have made more than 71 million trips in the eight countries in which the company is present (Argentina, Chile, Colombia, Ecuador, Spain, Mexico, Peru and Uruguay) . Regarding the number of users, 5.4 million people will have traveled on Cabify by the end of 2021.

The recovery from the pandemic hit has not progressed at the same pace in its corporate client segment. Users who use the Cabify service with their personal account have used the application more frequently than those who do so with their company account. In fact, the estimated turnover in private passengers during the last quarter of the year is 76.8% higher than in the same period of 2020. While corporate mobility still has a long way to go, although forecasts are optimistic according to the restrictions due to covid-19 are remitting.

The differences are also geographical. In the case of Spain, the recovery lags behind Latin America, and by the end of 2021 it will not reach the volume of business prior to the covid. The most recent data that includes a division by country dates back to last year, when the mobility company obtained revenues of almost 120 million with its business in Spain, a little more than half that in 2019. “The main reason that explains The fact that Spain recovers at a lower rate than Latin America is the lower availability of supply in the collaborating fleets, which has a direct impact on the volume of trips. There are no restrictions on the number of vehicles, which makes the competitive environment very different, ”says De Antonio.

Regarding future plans, Cabify will continue with its commitment to multi-mobility. In addition to the services of taxi, motorcycles and electric scooters, there is the possibility of renting urban bicycles for months and receiving the purchase at home thanks to the agreement with Lola Market. In addition, the company has announced that it will incorporate 200 new technological profiles in Spain to work at its headquarters in Madrid or at the hub remote you are preparing.

The firm does not rule out going public in the future, although at the moment it does not set a date. “We want to focus on customers, drivers and recovering multi-mobility after the pandemic,” said De Antonio. The CEO has been forceful regarding the regulation of the sector. According to the Ábalos decree, the autonomous communities have until September of next year to regulate the conditions of the VTCs. If not, the licenses will no longer be valid on urban routes, condemning the sector to disappearance. “It is a contradictory situation, because society is demanding new forms of mobility. It does not make sense to leave so many employees on the street ”, remarked the CEO of Cabify.

What does the integration of the Colombia, Peru and Chile stock exchanges mean

What does the integration of the Colombia, Peru and Chile stock exchanges mean