The Caribbean island of Barbados this Tuesday opened a new chapter in its history with the definitive severance of its ties with the British monarchy and the declaration of a republic.

Sandra Mason, who was serving as Governor General, took office as President of Barbados to replace Queen Elizabeth II as head of state.

Barbados, which was attached to the British Crown for almost 400 years, changed its status from a constitutional monarchy with a parliament to a republic and definitively cut ties with its colonial past.

Mason’s oath, 73, coincided with the 55th anniversary of independence of the Caribbean island, which occurred on November 30, 1966, and occurred after Parliament elected her to the position on October 20.

After a 21-shot salute in Bridgetown’s National Heroes Square, Mason assured that with this transition the Barbadians, about 280,000 inhabitants, will be able to “make the most of” the essence of their sovereignty.

In the presence of the Prince Charles, heir to the British throne, the new president recalled that “for decades” there have been debates on the island about the transition of Barbados to a republic.

Former Prime Minister Freundel Stuart announced in March 2015 that the country would replace the monarchy with a republic in 2016, which, had it been carried out, would have coincided with the 50th anniversary of independence.

“Today debate and speech have turned into action. Today we set our compass in a new direction, building on the successes of the past 55 years and encouraged by the confidence generated by our triumphs and accomplishments,” Mason stressed. 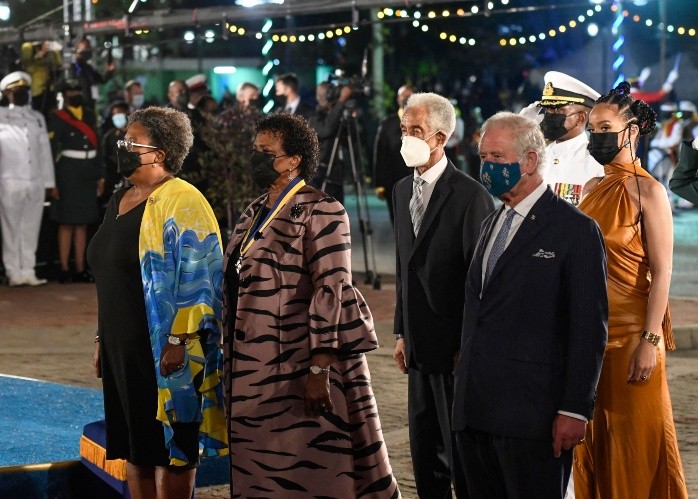 The gala ceremony was attended by, in addition to Carlos de Gales; former cricket player Garry Sobers and singer Rihanna, both from Barbados, who were rewarded with the National Heroes award.

He also highlighted the presence of several leaders of the Caribbean Community (Caricom), among whose 15 member states there are several former British colonies.

Carlos de Gales, who received the Honorary Order of Freedom from Barbados although his presence at the events was criticized For some, he said that the creation of this republic marks “a milestone in the long road” that the Barbadians “have traveled and built.”

In his speech, he alluded to “the appalling atrocities of slavery” during the colonial era, as to Barbados, like other Caribbean islands, slaves from Africa were transported to work the sugar plantations.

For this reason, Prince Charles, future leader of the Commonwealth, stressed that the island’s population “has forged its path with extraordinary strength, emancipation, self-government and independence” and now contemplates “a new horizon.”

The first step taken by Barbados in its first hours as a republic was the change of the royal banner for a presidential one and the delivery of honors to more than 80 of its citizens, most of them involved in the fight against the COVID-19 pandemic.

The seven-member team that has managed the pandemic, including Health Minister Jeffrey Bostic, received the Order of Freedom from Barbados, a country whose economy dependent on tourism has been badly affected by covid-19.

Barbados and its link with the United Kingdom

Barbados will remain united with the United Kingdom as a member of the Commonwealth, which also includes other Caribbean countries that have already replaced Queen Elizabeth II with a president in the past.

In the case of Guyana, which declared a republic in 1970, and Trinidad and Tobago and Dominica, which severed their ties with the British Crown in 1976 and 1978, respectively. All of them could be joined in the future by other countries.

“Barbados is not doing anything new, but what it is doing is of the utmost importance (…) I am hopeful that, in my lifetime, all or most of the independent Caricom countries will go from a monarchical system to a republican one “said the Prime Minister of Saint Vincent and the Grenadines, Ralph Gonsalves.

Gonsalves, whose country is a former British colony that remains attached to the Crown, explained that he “sincerely expects that change”, both on his island, as well as in Antigua and Barbuda, the Bahamas, Belize, Grenada, Jamaica, Saint Kitts and Nevis and St. Lucia.

First conviction of a jihadist for genocide against the Yazidi minority

First conviction of a jihadist for genocide against the Yazidi minority