They and us: new installment of the chronicles of Emmanuel Carrère since the trial for the Paris attacks

1. The point of view of the gendarme

Entering the Palace of Justice during the trial on Friday the 13th is like boarding a plane: in two successive controls you show your accreditation and your documents, you pass under some porticoes, you empty your bag and pockets, and if you also have a bottle of water you drink a drink to show that it is not TAPT, that explosive liquid that the jihadists call “the mother of Satan.” The gendarmes who carry out these controls are scrupulous and at the same time, without exception, extremely courteous. They take all the precautions they have been told to take, but state, with a smiling cordiality, that we are not their target.

Who we are? The lawyers, the journalists, the civil parties to whom, also without exception, no one would take us for terrorists. However trained they may be for suspicion, the gendarmes do not visibly assume a state of maximum vigilance when they see a guy like me approaching, with his credential around his neck: in his sixties and white, relaxed, the air of a good citizen, who has nothing to reproach himself and fear so little of being controlled in the subway that, in fact, there is no chance that they will. Who would then be a suspect for the gendarmes? Who would immediately put them on alert? The answer is unspeakable, but true: an individual “of the Maghreb type”, as the police reports say, dressed in a tracksuit or a hoodie. Well, there is no such individual among us. In two months I have not come across any in the galleries of the court. The only ones seen in the trial are on the bench.

2. The expert’s point of view

It is the logic of “them and us” in its purest form. We mild-mannered Democrats, honest people on whom Friday the 13th acts as a powerful machine for making community, ties, identification. We resemble each other, we understand each other, we recognize each other. In front, them. They, who do not resemble us, whom we do not know, whom we do not understand. All we vaguely think we know about these opaque young men, “those subjects from nowhere who emit weak signals”, as the prosecutor François Molins defined them, is that they want our death and that, even for themselves, they prefer death to the life.

So we are happy that experts, researchers, come to the bar to tell us who they are and what they have in mind. The first of these scholars is named Hugo Micheron. He is an Arabist, a professor at Princeton at 33, handsome in the face, elegant in his suit and so obviously on the good side of society that you wonder how he has been able to gain the trust of some 100 jihadists whom he has been interviewing for five years. in the neighborhoods where they come from, in Syria, where they went, and in the prisons where they are now. But he has earned that trust and what he tells me seems exciting. The member of my team from Obs (The new observer), Mathieu Delahousse, who had already recommended his book to me, French jihadism (1), has said flatly at the end of the hearing that this boy “had enlightened us”.

One of the many ideas that impressed me from his presentation: we consider a jihadist an enigma, a danger, but also a victim, the sick and cruel product of a cruel and sick society. To get to that point, we think, he must have been rejected, humiliated, marginalized by an implacable socioeconomic system that leaves him no other way out than crime or a religion that has gone mad. Micheron does not deny that all this is true and that many of the jihadists he has met can be considered victims according to this meaning: the one that emphasizes the class struggle. But he says never forget that they themselves do not consider themselves victims. Absolutely. On the contrary, they feel like heroes, in the vanguard of a great and irresistible movement of planetary conquest. 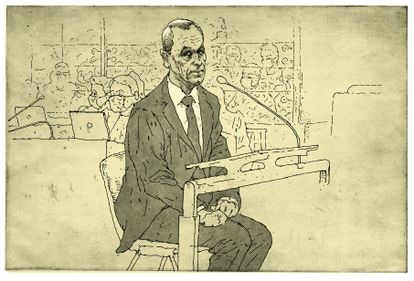 The real victims, in his view, are the pitiful “moderate”, alienated, collaborative Muslims who want to believe that Islam is compatible with the values ​​of the corrupted society in which they live. They are the infidels who pretend – like me and, I imagine, like you – open and tolerant, while the only respectable among those infidels are the far-right identitarians, fully in agreement with the jihadists in recognizing the radical incompatibility of their respective civilizations.

There is a jihadist pride, a jihadist confidence, which explains why de-radicalization programs work so badly. It would not have given a better one if the Roman Empire had organized de-Christianization programs in the first century: they would only have served to further exalt the candidates for martyrdom. When you dedicate your life to a just and glorious fight that will temper your spirits and whose victory is guaranteed both on earth and in heaven, why allow yourself to be persuaded to join the losing side? Why do losers have the power – provisional, laughable – to imprison you?

3. The point of view of the prison

It seems to me that I have not read this elsewhere: from now on, everything is forged in jail, says Micheron. In 2017, Europe emerged from a paroxysmal period of attacks as suddenly as it had entered 2015. The caliphate has collapsed, Daesh is in tatters, we would like to believe that this threat has been relegated to the world before. But there are in the history of jihadism periods of withdrawal and periods of expansion, systole and diastole, as in all history, starting with that of the Prophet who preached in Mecca, in the shadow and secret, for some companions, before beginning in Medina his public career and the portentous series of his military conquests. What lost Daesh, jihad thinkers analyze — there are — was its precipitation. It was to have believed that the medinista stage had arrived when they were still in the mesquitista stage. A small heroic vanguard was prepared, not the mass of believers, not even 10% of that mass that would have turned things upside down. A tactical retreat is imposed, a base is needed and that base is jail.

It is the laboratory of jihadism in the 2020s. The arrival of a hundred “returnees”, invested with the prestige of the Syrian adventure, had a devastating effect on a prison population, half of which were Muslim. They began by spreading them through various prisons where they exercised such influence that all the common law prisoners in Fleury-Mérogis howled with joy for hours when they announced the Nice massacre in July 2016.

They then tried another policy: regrouping, and created the Upra – radicalization prevention units – whose name makes us think: who hopes to prevent people who have been taught in the Daesh battalions in Syria from radicalizing? Prison system dilemma: how to separate the jihadists from the rest of the prisoners they could contaminate, without generating new synergies in those ENA (École National d´Administration) of terrorism that are the specific units?

Words of returnees, collected by Micheron: “As soon as there are more than three of us, we appoint an emir.” “Attention, we jihadists have just entered jail: what is happening is unprecedented for Europe. In the history of Islamist organizations, where have they been rebuilt? Always in jail! ”. “The question is how the jihadist is going to evolve in the next 10 years. For me, what is certain is that the next Adnani (Adnani, who died in August 2016, was the spokesperson and ideologue of Daesh) is in a French prison and is European and most likely French. You have to know that here, in the trullo, there are people who work! ”.