The trial against Ghislaine Maxwell: “He took advantage of vulnerable girls and pushed them to have sex with Epstein” 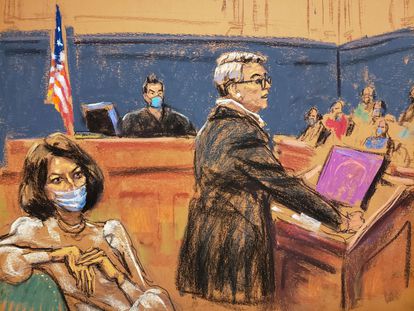 An illustration of Ghislaine Maxwell and attorney Bobbi Sternheim from this November 29. JANE ROSENBERG (Reuters)

The opening of the trial against Ghislaine Maxwell, the British heiress accused of providing minor girls to millionaire Jeffrey Epstein between 1994 and 2004, has put all the cards on the table this Monday with the exposition of the preliminary arguments by the parties. In her opening statement, Lara Pomerantz, an assistant US attorney for the Southern District of New York, pointed directly at Maxwell, who has been on remand in a Brooklyn jail for more than a year, assuring that he recruited young girls for her employer and former boyfriend. Epstein was his target. “He took advantage of vulnerable young people, manipulated them and pushed them to be sexually abused,” Pomerantz said.

“The charges against Ghislaine Maxwell are for things that Jeffrey Epstein did, but she is not Epstein,” argued defense attorney Bobbi Sternheim. An account of what happened that fits badly with the explanations that the assistant prosecutor gave about the assumption modus operandi of the accused. “Sometimes she was in the massage room herself, and sometimes she touched the girls’ bodies. Even when he was not present in the room, make no mistake: he knew exactly what Epstein was going to do with these girls after he brought them into the room. ” The prosecution maintains that Maxwell asked the minors to strip off their clothes to give the tycoon massages, the preamble to the abuse.

The accused was present during the opening of the trial. Dressed in black pants and a beige sweater, as well as a white mask, she was nervous. Maxwell constantly put on and took off his glasses, touched his forehead and hair and passed many notes to his lawyers, who will try to show that the trial is conditioned by the great media coverage it has generated and, especially, by Epstein’s suicide in jail in the summer of 2019, an event that has left the woman alone in court.

A long line of spectators and journalists had braved the cold early in the morning in court for the Southern District of New York in Manhattan, hoping to attend the first session. Maxwell faces up to 80 years in prison for six crimes related to the sex trafficking of minors, in addition to two others for perjury, of which she will be tried later. Unlike the recent televised trials of Kyle Rittenhouse in Kenosha and the murder of Ahmaud Arbery in Brunswick, there will be no video or recordings of the caso Maxwell, because cameras are not allowed in federal courts. The curious, as well as the bulk of the press, will have to follow the sessions on closed circuit television from adjoining rooms, which they will access without mobile phones and other electronic devices.

Two last-minute setbacks by both members of the popular jury delayed the constitution of the same for six hours. Finally, around 12:30 (local time), 12 full members and six alternates were sworn in, in a case that is expected to last six weeks.

District Judge Alison Nathan thanked those present for their patience as she resolved the contingencies raised by two of the jurors, one because her company only granted her a two-week paid leave; the other, for an unexpected family trip. “They have to keep an open mind until the trial is over,” Nathan said. “They shouldn’t come to any conclusions until they have all the evidence before them,” he advised.

“No health risk”: the documents that prove that the passengers of the Hamburg cruise ship had been authorized to disembark

"No health risk": the documents that prove that the passengers of the Hamburg cruise ship had been authorized to disembark