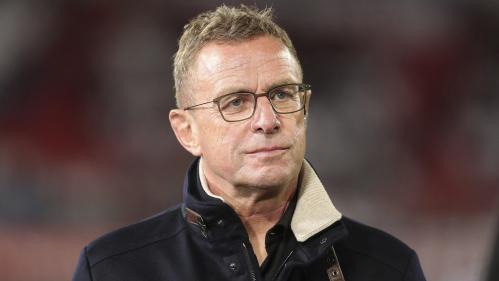 Strictly speaking, it’s not a high-sounding name. It is even rather difficult to pronounce if one is not familiar with the language of Goethe. But it’s a name that will carry weight in the months to come. Ralf Rangnick, out of the cold Muscovite where he officiated at Lokomotiv as head of sports and development, will now be in full light in the Theater of Dreams at Old Trafford, where he has just been inducted on Monday as interim coach until the end of the season. How did he get from Red Square to the Red Devils?

“I am excited to be joining Manchester United and focused on making this a successful season for the club. The squad is full of talent.

“All my efforts will be on helping these players fulfil their potential, both individually and, most importantly, as a team.”#MUFC pic.twitter.com/a3GKC42MuH

Take off with Ulm

It is with this small German club that Ralf Rangnick is known. Himself a former player, Rangnick will pass Ulm from promotion to the Bundesliga in 1999! A real Guy Roux journey. Especially since the man is a specialist in this kind of operations since he will do the same with Hoffenheim, which he installs in the German elite in 2006. In short, an outstanding leader of men. But not only. Rangnick is also known for his revolutionary precepts.

One of the founders of “gegenpressing”

Behind this buzzword, we must recognize the basics of top pressing, a tactical scheme praised by the cream of current coaches. Historically, he even preceded the “pope of gegenpressing”, Jürgen Klopp in person, with this principle which is translated in France by counter-pressing. On paper, nothing very innovative since it is a question of recovering the ball immediately after having lost it but, on the ground, it requires a rigor and a tactical sense to move the block-team that Rangnick did not have. of ceasing to develop.

Despite the undisputed authorship of what is now the alpha and omega of modern football, Ralf Rangnick remained in relative anonymity as his contemporaries (Klopp, Guardiola, Nagelsmann) reaped the gold and glory. The new MU coach has certainly won the German Cup in 2011 with Schalke 04 and leads the same club to the semi-finals of the Champions League the following season (where he will be eliminated by … Manchester United), his aura will rarely have crossed the borders of the Rhine.

Base man of the Red Bull project

The Austrian firm with bulls wanted to spread its wings in football. She wanted a strong man and a visionary. She found it. Thanks to Rangnick, RB Leipzig will make a name for themselves in the Bundesliga and on the European scene. In the shadows, this former midfielder broods the baby. Coach, sports director or supervisor, it is he who will take the reins of the project before he goes into exile, already, in Brazil and New York, to develop RB-stamped teams in these countries.

Even removed from the heart of the European game at Lokomotiv Moscow, Ralf Rangnick has not been forgotten. Especially not by Jürgen Klopp. The Liverpool coach therefore sees his former mentor land in the Premier League, but also a strong opponent. “Another good coach is therefore coming to England,” he observed at a press conference. “In Germany he made two clubs, Hoffenheim and Leipzig, become real threats. He did a lot of different things but his first goal was always to be a coach and manager. It is his best skill. believes Manchester United will be well organized on the pitch. He adds, with a smile: “Obviously, this is not good news for the other teams …”

COVID: A fifth wave of the pandemic is likely in Mexico