Request for resignation of the Archbishop of Paris: “He could hardly continue,” said the editor-in-chief at “La Croix” 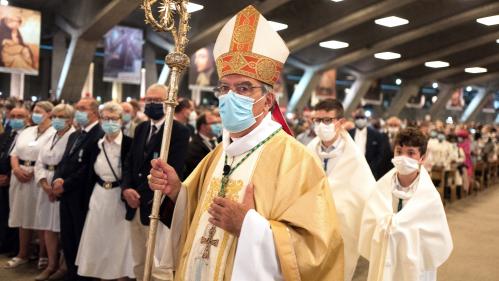 Monsignor Michel Aupetit “could hardly continue”, points out Isabelle de Gaulmyn, editor-in-chief of the daily La Croix, guest of franceinfo on Friday 26 November. The Archbishop of Paris has just presented his resignation to Pope Francis, after being questioned in an article in the weekly Le Point which relates a relationship that the Archbishop allegedly had with a woman in 2012 and problems in the management of his archbishopric. The Cross gave him the floor.

franceinfo: What does Monsignor Aupetit say in the columns of La Croix?

Isabelle de Gaulmyn: He explains that he handed over his office to the Pope, not because he recognized the facts, but, he says, to preserve the unity of the diocese. He is suspected of having had relations with a woman a few years ago and above all he is blamed for management problems in the diocese. Monsignor Aupetit has the feeling that he is no longer able to preserve the unity of the diocese and that it has become unmanageable. That said, the Pope has not yet accepted his resignation. He knows Monsignor Aupetit, he will discuss with the people of the Roman curia who are responsible for managing the Church. Maybe he will decide not to accept it because he will have the impression that he is acting under the pressure of certain Catholics. Perhaps after a discussion with Monsignor Aupetit, he will find that ultimately the fault is not so serious. It happens quite often. Monsignor Marx in Germany had tendered his resignation for many more reasons than that, and Pope Francis had refused it. You also remember Cardinal Barbarin, Francis initially refused. We don’t know at all what Pope Francis is going to do. But if he refuses his resignation, this will perhaps restore legitimacy to Monsignor Aupetit.

The silence of Monsignor Aupetit had disturbed these last weeks?

Yes, people wondered why he wasn’t speaking. It must be said that the pressure from the diocese was strong. For example, Monsignor Aupetit said nothing about the Sauvé report. He can no longer speak. He was not archbishop of a small town, but the archbishop of Paris, he is still the main representative of the Church in France. He is truly an important figure even today, even in a country that is much less practicing than in the past. As soon as there is a meeting between the President of the Republic and the religious, as soon as there is an attack, it is the Archbishop of Paris who goes there. It was still embarrassing that he could no longer speak on all the subjects that normally concern him. In addition, there will be difficult decisions since it will be necessary to apply this Sauvé report, to find money to compensate the victims. There are very complicated things in the future and in his situation he could hardly go on, it seems to me.

Would you say that there is both a very strong symbolism of the diocese of Paris, and a context that has made it more difficult to manage this situation?

Yes, it is a very strong symbolism. It is also the fact that the bishops in France often insist on the sexual morality of Catholics, they ask them to be faithful to marriage, therefore not to have relations outside, etc. So there is a problem of consistency between what he says and what he is, and that is what can confuse Catholics. Let’s also say that if this affair happened to a priest, that he explained that it was just a bad passage, that since, things are arranged, in the limit, it can stay as long as the bishop is in the know, we pass in the towel, in a way. Except that when you are Archbishop of Paris, it is complicated to have such an affair on you. The slightest suspicion becomes particularly heavy. And then, the management of Monsignor Aupetit in Paris had been quite disputed for several months already. He also did not have sufficient internal support to deal with this situation.

Two women (49 and 22) arrested for shooting in Maastricht

Accident in Joquicingo: bodies of the 20 victims have already been delivered to the next of kin

Accident in Joquicingo: bodies of the 20 victims have already been delivered to the next of kin