This Sunday morning, the northern jungle of Peru and a vast area around the central coast of the country registered a strong earthquake of 7.5 degrees. So far, authorities have not reported fatalities, however, there was damage to some farms.

As reported by the local Geophysical Institute, the earthquake was registered at 05:52 local time (04:52 hours Mexico time) with epicenter 98 kilometers east of Santa María de Nieva in Condorcanqui, Amazonas, northern jungle of Peru, at a depth of 131 kilometers. 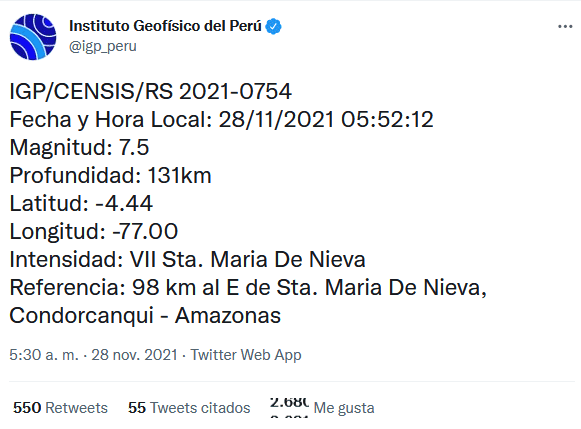 The great depth of the earthquake in the Peruvian Amazon caused the shock wave to be greater and affect almost half of the country, in the north and central zone, including coastal and Andean regions such as Cajamarca, Piura, Tumbes, Lambayeque, Ancash and Lima.

The Civil Defense indicated, in its second report, that so far no personal injuries have been reported, but an undetermined number of homes in various districts of the Amazon region were affected.

The district of Santa María de Nieva is a sparsely populated area inhabited by Amazonian indigenous peoples and is located on the banks of the Nieva River, on the border with Ecuador.

“The movement has been immense, but we have no injuries,” Héctor Requejo, mayor of the Santa María de Nieva district, with a population of 2,500 inhabitants, told RPP radio.

Requejo indicated that some adobe and wood houses collapsed due to the magnitude of the earthquake.

There were also power outages in the affected area.

“It reminded us of the earthquake that occurred in Ica” (southern Peru), a woman from the Amazon region told the Latina television channel.

“We have all gone out onto the streets, we are very scared,” a citizen who identified herself as Lucía said in turn to RPP, who communicated by phone from the city of Chota, in Cajamarca, the region where Peruvian President Pedro is a native. Castle.