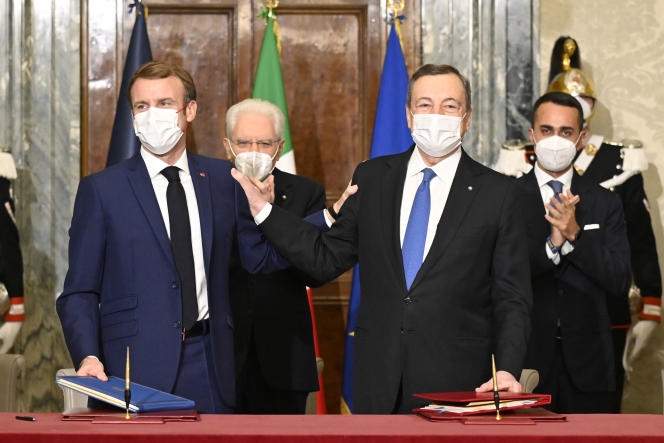 Italian Prime Minister Mario Draghi hailed “a historic moment” in the relationship between France and Italy. The two countries signed, Friday, November 26, a bilateral treaty of enhanced cooperation in order to consolidate a relationship tested in recent years.

The treaty was initialed in Rome, at the Presidential Palace of the Quirinal, by French President Emmanuel Macron and Italian Prime Minister Mario Draghi in the presence of Italian President Sergio Mattarella. The three men exchanged long hugs, while the Patrouille de France and its Italian equivalent, the Flèches tricolores, flew over the capital, leaving a plume of smoke in the sky in the colors of the two countries.

Read also Article reserved for our subscribers Between Emmanuel Macron and Italy, a checkered relationship

The text provides for areas of enhanced cooperation in matters of diplomacy and defense, as well as in various fields, such as digital and environmental transitions, culture and education, economic and industrial cooperation, and space. It also establishes a common civil service for young people and provides for the regular invitation of ministers to the respective ministerial councils, on the model of the Treaty of Aix-la-Chapelle.

This “treaty for enhanced bilateral cooperation”, known as the Quirinal Treaty, is very rare in Europe: it is only the second treaty signed by France after that of the Elysee, initialed in 1963 with Germany, completed by that of Aachen in 2019.

The two officials have multiplied the references to their European commitment, believing that their rapprochement strengthened the European Union in a difficult context for the bloc, after Brexit and when the German Chancellor, Angela Merkel, hands over to Berlin.

“The institutions that we have the honor to represent are based on the same republican values, on respect for human and civil rights, on Europeanism”, declared Mario Draghi, former president of the European Central Bank. “From Stendhal to Umberto Eco, from Mastroianni to Belmondo, to Claudia Cardinale, we share many memories and references in common,” he added.

For Emmanuel Macron, the treaty “seals a deep friendship”. “It was almost an anomaly not to have this Quirinal treatise, because so many things unite us: our stories, our cultures, our artists”. “Founding countries of the Union, first signatories of the treaties (…), we defend a more integrated, more democratic, more sovereign Europe”, underlined the French President. However, he assured that France was not looking for “alternative ways” to the Franco-German relationship after the departure of Angela Merkel.

The European Commissioner for the Economy, the Italian Paolo Gentiloni, greeted on Twitter a Franco-Italian agreement which “strengthens the entire European Union in a phase of historic transition”.

The treaty, which was announced in 2017, was frozen after the formation in 2018 of a populist government led by the 5-Star Movement (M5S, anti-system) and the League (far right) of Matteo Salvini.

Read also Article reserved for our subscribers Between France and Italy, a slow divorce

The crisis peaked at the beginning of 2019, when the vice-president of the Italian Council, Luigi Di Maio, had met in France a leader of the “yellow vests”. Shortly before, Matteo Salvini, Minister of the Interior, called for the resignation of the French president. To protest, Paris had temporarily recalled its ambassador to Italy, Christian Masset: a manifestation of the most serious diplomatic crisis between the two neighbors since 1945.

Migrants: Gérald Darmanin cancels the visit of his British counterpart to the meeting scheduled for Sunday in response to Boris Johnson’s remarks

Migrants: Gérald Darmanin cancels the visit of his British counterpart to the meeting scheduled for Sunday in response to Boris Johnson's remarks