This Friday the rector of the University of Guadalajara (UdeG), Ricardo Villanueva, met with deputies from Movimiento Ciudadano (MC). During the meeting, which took place between budget figures, demands on the needs of the University and indications about a lack of transparency, an agreement was reached to return to the study house the 140 million pesos destined for the Museum of Environmental Sciences; However, moments later the Emecist coordinator, Gerardo Quirino, denied this information.

About, UdeG issued a statement in which it concluded the agreement: “The University of Guadalajara celebrates the disposition of the deputies of the Citizen Movement party to support the highest House of Study, to manage a fair budget for 2022 before the Government of Jalisco and the federation,” it reads.

“This afternoon, the Citizen Movement (MC) bench met in the Jalisco Congress with the General Rector of the University of Guadalajara, Dr. Ricardo Villanueva Lomelí, where they proposed an agreement for Governor Enrique Alfaro Ramírez to deposit the 140 million pesos that had been allocated for the Museum of Environmental Sciences in exchange for the University to show solidarity in the fight for a larger budget for Jalisco. “

“The University of Guadalajara celebrates the commitment expressed by the deputies of the Citizen Movement,” the statement concludes. 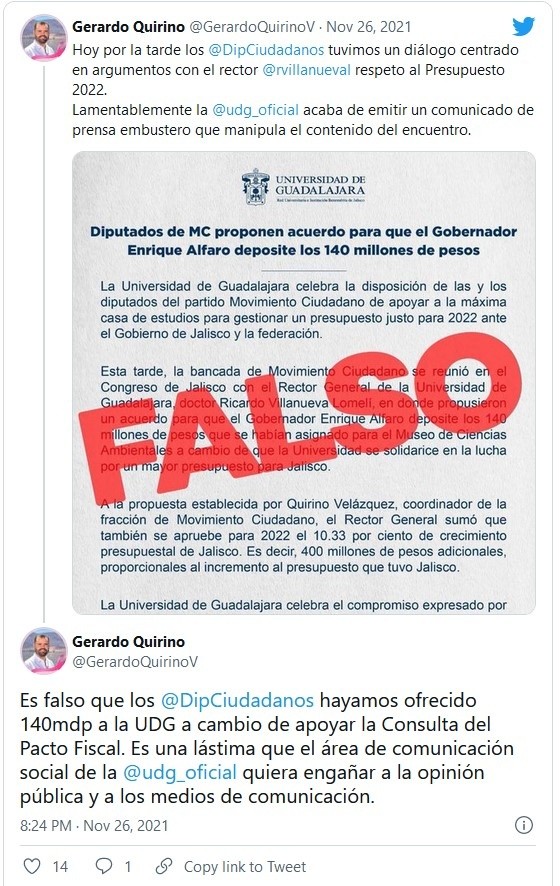 Given this, Gerardo Quirino issued a position on his Twitter account in which he assured that the University had published “a deceitful press release that manipulates the content of the meeting”. His tweet is accompanied by an image of the statement, crossed out with the word “FALSE” in red letters.

“It is false that the @DipCiudadanos have offered 140 million pesos to the UDG in exchange for supporting the Consultation of the Fiscal Pact. It is a pity that the social communication area of ​​the @udg_oficial wants to deceive public opinion and the media,” he concludes the legislator in his tweet.