Covid certificate in Spain: which communities have approved its use and for which activities

The use of the covid certificate is making its way little by little in Spain. There are already six autonomies that have obtained authorization from the courts so that the document that accredits the vaccination serves as a safe-conduct to access certain spaces. They are Galicia, Aragon, the Balearic Islands, Murcia, Catalonia and Navarra. However, it is not required in the same spaces in each territory.

The following is a review of the application of the covid certificate in each community:

Andalusia (cumulative incidence per 100,000 inhabitants in the last 14 days: 82.7). In Andalusia, at the moment, the covid certificate is not required. The committee of experts meets this Friday to discuss the possibility of introducing the measure. Health commented on the possibility of it being applied in hospitals, residences, nightlife and sports facilities, but also clarified that it would not be required in all spaces from the beginning and that its use would be modulated according to judicial authorization.

Aragon (267.19). The covid passport is required for people who want to access nightlife venues, celebrations in hospitality establishments and mass events. The Superior Court has requested allegations from the affected sectors, but for the moment it does not block the implementation of the document.

Asturias (105.81). The Government of Asturias does not propose “for the moment” to promote measures that imply the requirement of the COVID certificate, but it leaves the door open to impose it in the future.

Balearic Islands (211.77). In the Balearic Islands, the covid certificate is currently required to enter discos and residences. The Superior Court of the community extended the authorization until the beginning of December. Despite the fact that the Government of the islands assured in recent days that the current measures were “sufficient” if their compliance was guaranteed, this Thursday the Minister of Health, Patricia Gómez, has defended that the requirement of the certificate be studied for the increase of the incidence. On Monday the social dialogue table with unions and employers will be convened to decide if the certificate is finally required to access bars and restaurants. The regional government will have to request authorization from the Superior Court. 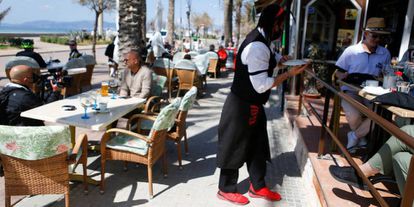 Tourists on a terrace in Palma de Mallorca in August Reuters

Canary Islands (150.69). The Government of the Canary Islands will ask the Superior Court of the community to ratify its decision to force the presentation of PCR tests or covid certificates in all activities subject to capacity and schedule restrictions. The Executive will present this petition next Monday. The objective is that, if it is ratified, it will enter into force from the month of December. The Ministry of Health assures that the regulations presented this Thursday will allow the sectors that apply it to make the restrictions more flexible, since they will be able to benefit from the measures of the level lower than that of their island at all times.

Cantabria (119.92). The Cantabrian justice rejected the application of this document in Cantabria in summer. The president of the community, Miguel Ángel Revilla, has defended its usefulness and has criticized the courts for not accepting its application in a general way: “That the judges understand that it is necessary to control”, said this tuesday. At the moment the document is not in force in Cantabria. A spokeswoman for Health explains that “if the national framework is promoted, Cantabria will support it. In this region the issue has been weighed and, at this moment, with the data that we handle now, because the situations with this virus are very changeable, we understand that the passport would have a limited impact ”.

Castile and León (187.94). The Government of Castilla y León is waiting for the legal report on the covid passport in hospitals and shelters, which would be the first places where the Board would impose it in case of adopting it.

Catalonia (208.79). The Superior Court of Justice of Catalonia has decided to endorse the covid passport in bars, restaurants, gyms and residences in Catalonia. The Government asked the TSJC on Tuesday the extension of the document that certifies that citizens are vaccinated, with the idea that it will come into force this Friday, to operate already the weekend.

Valencian Community (167.56). The autonomous government has approved this Thursday to request authorization from the Superior Court to implement the covid passport in premises with a capacity of more than 50 people. The certificate will be necessary in hospitality, nightlife and concerts, as well as in residences. In the event that it is approved, it will be in force for one month so that its publication in the Official Gazette of the Generalitat, in the event that it is authorized, will not be carried out until the next day 3, with the aim that the measure also includes the end of the year.

Extremadura (70.3). At the moment, the Board does not consider the application of this document necessary.

Galicia (133.91). The Superior Court of Xustiza de Galicia endorsed the use of the covid passport to access hospitals and also for nightlife. The Executive is waiting for the authorization of the courts to require the document also to enter bars and restaurants from 9:00 p.m.

La Rioja (170.36). At the moment, the Government is not considering the application of the covid passport.

Madrid (122.07). In the Community of Madrid, the covid passport is not required to access any space. Although this Tuesday, President Isabel Díaz Ayuso affirmed that they were “with the debate on the covid passport,” she also added that she was not “clear that it is the most effective measure,” and made reference to the judicial problems that have already occurred in other autonomies. 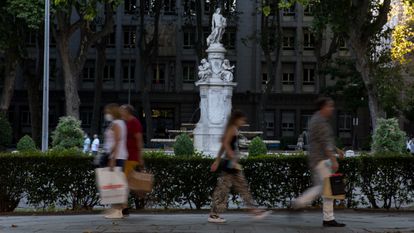 Pedestrians on the Paseo del Prado, in July.Víctor Sainz

Murcia (171.18). The Superior Court of Justice of the Region of Murcia endorsed the requirement of the COVID certificate in nightlife venues and mass celebrations. For both categories of establishments it is not mandatory to order it. But if they require it, they can reach 100% of the capacity and, if not, 75%.

Navarra (462.34). This Thursday, the Superior Court of Justice of Navarra has endorsed the application of the COVID certificate in the community, considering it an “ideal, necessary and proportionate measure”. Thus, from November 27 to January 6, the document will be requested to access restaurants with more than 60 diners, establishments with a disco license or party rooms. The certificate will also be required to attend mass events of a cultural nature that, with a capacity of more than a thousand people, are held indoors, and where food or drink is offered.

Basque Country (350.96). In the Basque Country the vaccination certificate is not required. The Basque Government wants to implement it in restaurants with more than 50 diners and in discos, dance halls or nightclubs with shows. He processed the request to the Basque High Court, but the latter denied it with division among the members of the court (two voted against it and only the president of the court supported it in a private vote). Although initially the Executive of Urkullu decided not to appeal this decision, finally this Wednesday it decided to take this matter before the Supreme Court.