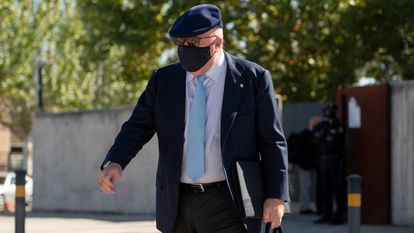 Commissioner José Manuel Villarejo, on October 13 when he left the National Court after the start of the first trial for Operation Tandem Alberto Ortega (Europa Press)

BBVA has delivered to the National Court the final report of the internal investigation into the alleged irregularities in the work carried out by Commissioner José Manuel Villarejo for the financial institution between 2004 and 2017, and for which the retired police officer pocketed 10 , 3 million euros. The document, prepared by the consulting firm PwC and to which EL PAÍS has had access, concludes that at least 11 executives – of them, nine already charged by Judge Manuel García-Castellón – participated in the signing of the contracts, the validation of the services and payments to Cenyt society, the epicenter of the business network of the alleged head of the parapolice network. Three of those named continue to work at the bank.

Among those mentioned, in addition to the former head of Security, Julio Corrochano, are the then head of Human Resources, Ángel Cano, who was later appointed CEO of BBVA; the director of finance, Javier Malagón; the head of the Accounting Department, Ricardo Gómez; and Antonio Béjar, responsible for the Risks Area in Spain and who collaborates with the justice system. In this piece of the macrosummary of the Villarejo case, a score of people are charged, including Villarejo himself, former President González and BBVA as a legal entity. Among the victims of these illegal espionage are journalists, businessmen and politicians.

The report delivered this Friday by the financial institution to Judge García-Castellón complements two previous reports from the internal investigation that BBVA incorporated into the case in July and December 2019. “In this report, PwC consolidates and develops the two previous reports, raising its conclusions to final ”, highlights the bank’s letter that accompanies it. Throughout 102 pages, the document analyzes seven contracts signed, between December 2004 and June 2016, between the entity and the Villarejo company under such generic concepts as “information analysis services” or “analysis and surveillance in matters of security of the general environment ”. The conclusion of the report is that in all of them there were numerous irregularities that violated both BBVA’s internal procedures on contracting and, in the case of some executives, the codes of conduct regarding the acquisition of goods and services.

The document places the main focus on the former director of security of the bank, Julio Corrochano, whom he identifies as the person who signed five of the seven contracts analyzed, as well as being responsible for verifying, together with other executives, most of them. Corrochano, who held senior positions in the National Police during his time as commissioner, is also listed as the person who authorized the payments for four of these contracts. Along with him, the investigation points to Ignacio Pérez Caballero, then director of the Bank’s Risk Area, as the other person who signed at least one contract with the Villarejo companies. Pérez Caballero also appears as verifier of the works of a contract. In this last function, the report also points to Cano, Béjar, the BBVA Group’s Risk Director, Manuel Castro, and two security officers, Nazario Campos and Laura Crespo. The latter two still work at the bank, as confirmed by the entity. Crespo is one of the 11 people indicated by the report who is not charged in the case.

Finally, as responsible for authorizing the payments, the document cites, in addition to Corrochano and Pérez Caballero, again Cano, Bejar and Castro. Along with them, the report also identifies four other executives with this function: Ricardo Gómez, the accounting clerk Beatriz Aguiriano and Inés Díaz Ochagavía, current head of security at the bank. Díaz Ochagavía presented in July 2020 a letter in which he questioned the conclusions of one of PwC’s preliminary reports in which he was indicated as responsible for the verification and payment of 20 invoices to the Villarejo company for a total of 1, 36 million euros.