We don’t have to save philosophy. It is philosophy that must save us 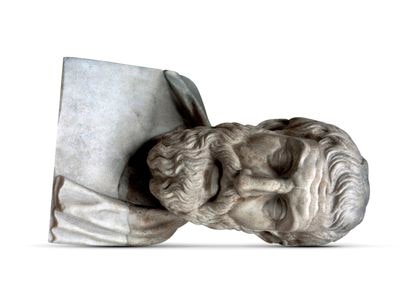 Bust of the Greek thinker Epicurus, in the British Museum in London (PHAS / Universal Images Group via)

Philosophy is not a white bear on the brink of extinction balancing on a piece of ice. Philosophy saw the Greek world, the Roman Empire and the Middle Ages disappear, and now it waits to see, with amused curiosity, what new delirium our world is transformed into. Philosophy is not an old woman devoted to bury us all thanks to her poor iron health. It is a workhorse that leaps over the heads of those who thrust their spears into it. Socrates was condemned, Hypatia massacred, Bruno burned, Spinoza anatemized, Diderot imprisoned. And yet no one remembers the names of those princes or priests who harassed them, and even less that of the bankers, soldiers or celebrities who ignored them. Although a new Middle Ages awaits philosophy, it will continue to advance masked until it is reborn again, like Athena, armed with all her weapons.

Does this mean that we should not defend their presence in primary, secondary and university, not to say in the press, in parliaments and in the streets? Not at all, we must. But not for the reasons we usually adduce. First, because, as we have just seen, it is false that philosophy is in danger of extinction (and falsehood, however effective it may seem in propaganda terms, is a boomerang that ends up returning from the most unexpected and painful angle). Second, because it is not even effective, because who can find an activity attractive whose defenders do nothing but cry in procession after their relics? That could arouse people’s compassion, but not their desire. Philosophy needs fresh air, not artificial respiration. And to give it to him it would be good to open wide a new perspective: that it is not philosophy that must be saved by us, but that we are the ones who must be saved by philosophy.

The term “salvation” will sound strange to many (although the very name of Epicurus was translated as “he who helps” or “he who saves”). The truth is that, in its origins, philosophy was conceived as a secular soteriology; This is, as a theory and a practice of salvation, understood as the art of seeking in this life a certain happiness, individual and collective, without the help of the gods, but only thanks to our reason and our effort. To achieve this, philosophy offered a whole series of practices that had to serve to incorporate the philosophical ideas that one wanted for himself. Today, these practices, such as conversion, examination of conscience or existential exercise, sound religious to us, but, as we learned by reading Pierre Hadot, in ancient times they were almost exclusively the province of philosophy or politics.. At that time, religion did not claim for itself the interiority of people, as Christianity would later do, which appropriated all these existential methods. Stripped of its main function, philosophy became the slave of theology, that is, a merely theoretical activity, reduced to demonstrating fixed intangible dogmas a priori by religion.

During the Renaissance, humanism attempted to restore philosophy to its original powers. “What you give to men you take from God,” Luther snapped at Erasmus. The essays de Montaigne are simultaneously a conversion, an examination of conscience and a spiritual exercises (in this case, Epicureans and skeptics). Afflicted with a 1,000-year-old Stockholm syndrome, modern philosophy swiftly returned to the fold of theory, returning the sphere of practice to religion first and psychology and self-help later. Since then, with some exceptions, academic philosophy has languished given over to the theoretical and the abstract, if not directly to the abstruse. As evidenced by the fact that much of the great philosophy of recent centuries has been done in freedom, outside the academic zoos: Erasmus, Montaigne, Spinoza, Hume, Diderot, Nietzsche, Emerson, Camus.

But it is not only a religious or academic question, but also a political one. Well, capitalism also ended up being interested in that set of existential practices with which it has managed to form a true indoctrination system. Thus, in the face of the secular salvation of philosophy, understood as the search for individual and social happiness, capitalism has imposed its own happycracia, which serves to hyper-responsible individuals and make power invisible, as Cabanas and Illouz have studied. Faced with the classic virtues, such as practical wisdom, self-control, persistence and justice, which seek the liberation of individuals from external and internal subjugations, capitalism has spread the virtues of entrepreneurship, creativity, and reinvention. and assertiveness, which have transformed our existence into a means of production. But isn’t this all philosophy? Isn’t the idea of ​​the end of history a philosophy of history? Isn’t the conception of man as an interested and selfish being philosophical anthropology? Doesn’t the practice of post-truth imply an entire epistemology? And the notion of the invisible hand of the market or the Folk spirit are they not pure metaphysics?

The truth is that there has never been more philosophy than today. The only thing is that it has fallen, once again, into the hands of the powerful, who seem to be the only ones to realize its usefulness, because, thanks to it, their domain has become invisible and intimate, almost religious. That is why they want it only for themselves, and it is going well for them that we continue to defend it as a theoretical discipline, somewhat archaic and useless, although very valuable. But as long as we do not stop representing it as a Chinese vase, it will not change hands (or break in the struggle). For this reason, in addition to a greater presence of philosophy in the educational system, we need to become aware of the “philosophical” ways in which power dominates us, and to assume that it is not philosophy that must be saved, but that we are those of us who must be saved by philosophy. Who was going to tell us that we were the white bear balancing on the piece of ice of philosophy. If you set it on fire, we will sink. A shame for us. And the philosophy? It will resurface with winter.

Bernat Castany Prado is a philosopher and professor at the University of Barcelona.