VIDEO. Nicolas Hulot’s response: “It’s their word against mine” 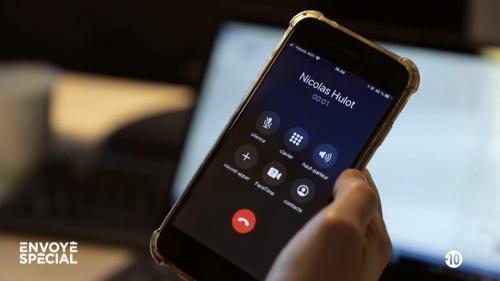 The journalists of “Special Envoy” contacted Nicolas Hulot and his lawyers on several occasions. He refused to answer their questions in front of a camera. His advice also declined interview requests. They let it be known that their client strongly disputes the facts, and more generally claims to have never assaulted a woman in his life.

We had a telephone conversation with Nicolas Hulot on November 9, 2021. Here is an excerpt.

– Elise Lucet: Hello, this is Elise Lucet, I think you are trying to call me?

– Nicolas Hulot: Absoutely. I was going to leave you an SMS or maybe I left it for that matter.

– Elise Lucet: I take the liberty of calling you because for several years we have been investigating your attitude towards certain women and we have collected five testimonies that we will be disseminating in the coming weeks. In the necessary contradictory exercise, we would like to collect your version of the facts and know how you can express yourself in relation to these cases that we will be addressing in a “Special Envoy” program fairly quickly, in the coming weeks. …

– Nicolas Hulot: Okay … That’s another thing. I will never be left alone. It’s not possible what.

– Elise Lucet: We are in journalistic work, it is a very long-term job for Virginie Vilar and the editorial staff of “Special Envoy”, the accusations are heavy, accusations of sexual assault and rape, you can imagine that in this framework, one cannot not ask you what is your version of the facts and not to make the exercise of the contradictory, journalistically, it is essential.

– Elise Lucet: Wouldn’t it be best if we did an interview? I can tell you more about the profiles. These are women who have thought a lot before speaking, I don’t feel at all that it is angry at all, more like their testimony is extremely well thought out. You understand of course that for us, it is impossible, journalistically, that one diffuses these testimonies without asking you to react in relation to it, and to give us your version of the facts. Our goal as journalists is to get as close as possible to the truth, it is essential for us, journalistically, to ask you for your version of the facts.

– Nicolas Hulot: No Elise, I cannot answer you there, I am devastated. So… I can’t even imagine. Here is.

– Elise Lucet: Does that surprise you?

– Nicolas Hulot: It’s not even that it surprises me, it’s that I am devastated. I have never had ambiguous relationships. I mean, I’ve had stories with no tomorrow, like everyone else. But, I don’t even want to defend myself, that doesn’t interest me anymore, it’s not a question of recognizing, I don’t even have the strength anymore. I don’t want to defend myself. In any case, the words of the people questioned today are, in fact, distorted and suspect.

– Elise Lucet: I cannot let you say that because if people come to you, it is precisely to hear your words in relation to things which are very precise, in any case as they are exposed and it is perhaps not. not actually be your version.

– Nicolas Hulot: But yes, but you know very well that it will be word for word. What is normal today, the word of women is sacred. The word of men is called into question, so it is no longer even worth defending yourself.
The media trial is done in advance. No, and then I tell you frankly, I not only have the strength, not because I fear what I have done, but because it is so abject, so obnoxious, so years away- light of what I have always been and what I am. And that we can no longer defend ourselves anyway. The damage is going to be done, it is done. What’s the point ? What weight will my word have in the current context? And how do you want me to remember? I especially remember what I never did. I have never in my life coerced into anything, anyone. Never, neither close nor by force. When we do not feel, that we do not seduce, or that we are not seduced, we stop there and it is like that since the dawn of time.

– Elise Lucet: At no time do you have the feeling of having crossed borders which, for the women who were in front of you, were unacceptable?

– Virginie Vilar: How do you explain then that today there are so many women who live with what they qualify as “trauma”? If these women speak years later, they have nothing to gain, that’s what they say, it’s because they live with this pain.

– Nicolas Hulot: I’m not going to tell you, I’m not going to counterattack that they’re all liars, stuff like that. I do not know. What I do know is that I never did. But when you’re innocent like I am, innocent in a way you can’t even imagine. We are trapped anyway, whatever we say, the word is suspect. Whatever we say. Here is. We cannot defend ourselves. We cannot defend ourselves. Because in this legitimate, necessary fight of women, the voice of women is sacred, and there you have it.

– Elise Lucet: Don’t you think that at one point there was a feeling of overkill because you were a big star?

– Nicolas Hulot : But, overkill of what? Nothing at all.

– Elise Lucet: Not to understand that sometimes women were opposed to the relationship you maybe wanted to have?

– Elise Lucet: This is not what they tell us.

– Nicolas Hulot: I know, otherwise you wouldn’t be here. It’s their word against mine. It is useless, it is folded in advance. I’m not hanging up on you, but I’m leaving you, there you go.

The facts described by the women who testify in the “Special Envoy” investigation are time-barred and may not be the subject of any legal proceedings. Nicolas Hulot is presumed innocent.

Security in Jalisco: They arrest him after robbery of a public transport truck in the Periférico Oriente

Security in Jalisco: They arrest him after robbery of a public transport truck in the Periférico Oriente