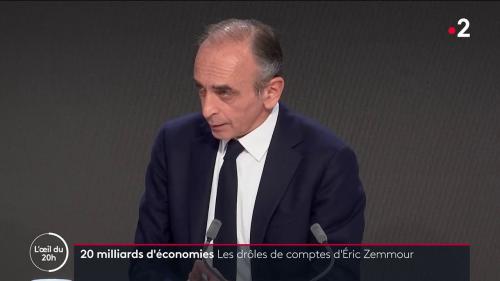 If he was elected president, Eric Zemmour wants to increase the low salaries of the French. For that, he has an idea: to abolish social benefits for all foreigners born outside the European Union. According to him, the measure would save 20 billion euros.

To understand where this figure comes from, we contacted Eric Zemmour’s entourage. An employee who wished to remain anonymous agreed to give us details of the calculation method by telephone. Their starting source: press articles. In 2011, the newspaper Liberation, citing CAF, argued that non-European foreigners represented 13.2% of RSA beneficiaries. In 2017, according to Le Monde, it was 16% foreigners. From these two data, the team then calculated an annual growth rate of foreign beneficiaries, which it establishes at 3.3%. They thus applied this rate over the following years, to obtain the rate for 2021.

We apply this growth rate (…) to obtain the data in 2021, which therefore results in 18% of non-European foreign beneficiaries of the RSA.

This figure does not exist officially: no institution, no social body confirms it. However, this rate of 18%, Eric Zemmour’s team then applied it to most social benefits: family allowances, housing assistance, complementary health solidarity … To obtain in the end the 19.9 billion savings , about which Eric Zemmour speaks.

For Lionel Ragot, professor of economics, this is a faulty calculation. The method would amount to making generalities.

Eric Zemmour’s team acted as if everything was homogeneous: “If I am a beneficiary of RSA, then I receive family allowances” … This is false!

Lionel Ragot, professor of economics at the University of Paris X – Nanterre

Even Eric Zemmour’s team recognizes that his calculation is imperfect but is justified.

We have very little data available, so we have to make assumptions. But if the organizations concerned were required to be transparent, we could very well revise our figures upwards or downwards.

When contacted, neither INSEE, CAF, nor the Research, Studies, Evaluation and Statistics Department (DREES) have such data and can therefore not confirm or refute these estimates.

Covid-19: the new rules for entering France applied from Saturday

Bloody “exorcism”: 50 years in prison for members of a sect

French evacuation flight from Afghanistan, 60 Dutch people on board