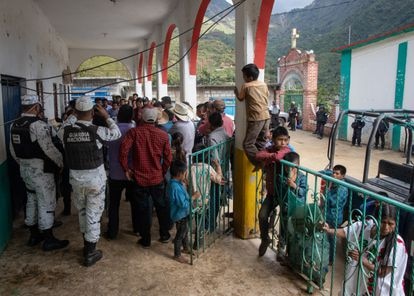 Inhabitants of Joya Real, in Guerrero, negotiate with the lawyers of the Tlachinollan Human Rights Center for the release of a 15-year-old minor after fleeing a forced wedding.

Two children are collected in a support center for families in Chilpancingo. She is 15 and he is perhaps a year older. They belong to the na savi community, in the high mountains of Guerrero, and have fled their homes. Rather, she fled and took refuge in the home of him, her boyfriend, because they wanted to marry her to another in exchange for 200,000 pesos (more than 8,000 euros). It is not an extraordinary case, it occurs frequently in those lands and in other Mexican communities. What is extraordinary is that nobody knows very well what to do with them, how to give them a way out, because returning to the community does not seem feasible, they have broken the honor of the family and the entire town, they accuse them. It is also common what happened in the same community, a few weeks before, to Angélica, another girl who was sold in marriage: her husband went to the fields and she was left alone at the mercy of her father-in-law, who raped her several times. The extraordinary thing, again, is that she is hidden in a nameless community, as if she were a criminal, for the crime of having rebelled against the life that was imposed on her.

On November 10, the new governor of Guerrero, Evelyn Salgado, appeared in Tlapa with several officials, the president of Inmujeres, Nadine Gasman, other officials and authorities in the area. To the rhythm of drums they were going to present a strategy to prevent, attend to, punish and eradicate violence against girls and women in the area. During his election campaign, he already promised to make Guerrero a sanctuary for women. But that strategy is not solid or liquid, because they are still looking for money to reach the municipal presidencies to combat this violence.

There are several versions for Anayeli’s horror story, the one given by the neighbors and the one she lent herself. Abel Barrera, the founder of Tlachinollan, a human rights center in the Guerrero mountain, whose staff was following this case and protecting the boys in their rebellion, relates it this way: “Ten days after the arrival of the governor to Tlapa, this past Monday night, a person spoke to us anonymously by phone to report that a girl was detained in the dungeon of Joya Real, a community belonging to Cochoapa el Grande ”.

Follow Barrera by phone, words more, words less: The day before the classic coexistence was celebrated. The marriage partner’s family killed a cow and distributed beer. The day before, however, he was not going to bring a wedding. The girl escaped the next dawn, when the rite was to be held. For her they had negotiated 200,000 pesos. With the arrival of money from migration to the United States, the figures for buying girls have caused a great scandal, exposing a practice that cannot be accommodated in this century, whether it be customs, customs or traditions. Some begin to rebel, but they do so while facing risks, perhaps a punishment that will forever separate them from their families.

Anayeli sought refuge in the home of her real boyfriend, another boy who lives near them. They wanted to escape, but where, who would take them. Getting in and out of the mountain on those impassable roads is hours by car, if one is available. In the light of day, when the family went to look for the bride and found the bedroom empty, a neighborhood search was unleashed that soon found their prey. To the dungeon both. And an uncle of the girl and a cousin, who was, they say, the one who negotiated with the family of the contractor the 200,000 pesos of the sale.

“When we were notified of the arrest of the boys, I called the governor’s secretary, I told them it was an urgent matter, but not what it was about. That they did not have time, that they were on the road, that the next day … I spoke with the state prosecutor’s office and with the regional one, to see who could intervene. I called the human rights commission, but they didn’t answer me, so I dialed the regional one. There yes, ”says Barrera.

At seven in the morning the following day, last Tuesday, a delegation of security agents from all the bodies and lawyers from Tlachinollan left for Joya Real. The journey took six hours. There is a lot of isolation that these peoples experience. Of all kinds. The commissioner [alcalde] It was not so that the Principales, a committee of older men who dictate and enforce the laws to be followed in the community, were in charge of receiving the entourage. In effect, they said, the girl was locked up for having disobeyed the word given, violated an honor whose grievance the entire town accuses. And money had been paid. And of the cow, not even the bones anymore.

In Mexico, marriages are forbidden at those ages, but the law is one thing and the tradition another. Before the Principals and other community officials, the state and federal authorities see their strength dissipated. Still, Tlachinollan’s lawyers finally managed to get the children out of there and down the mountain to Tlapa. There were conversations for hours with the families, with the boyfriends, the real ones, who did not want to go to the family support center (DIF) in Chilpancingo. “From 11 in the morning to 9 at night we were looking for a way out,” says Barrera, but the hardest thing is missing: that the family that bought the girl and the cow comes to their senses. They claim what was paid. The girl’s parents have agreed to raise that money, “but the issue is not that, but rather to protect the girl, to make them understand that these things cannot be done like that, that marriages are not negotiated,” says Barrera. And he also says that “wounds must be closed.”

At the DIF, psychologists take care of the boys, let their families visit them, says Barrera, but no one sees it as prudent for them to return to town for now. He was studying, she was not. Both are dedicated for long periods to wages in the field. “School is still not an option to improve their living conditions, least of all for them, who leave early to get married,” admits Barrera. The girl has a stepmother and a recently deceased father, they say in Tlachinollan. And an extreme shyness that the city only increases.

“The problem is that there is no urgent help protocol for these cases. When the governor came, they did not invite indigenous women to participate actively. We were invited, but we couldn’t speak either, ”Barrera complains. “Nor was the gesture of communicating in the mother tongue of these communities.” It is not a minor detail, because there are many who do not know Spanish. Barrera does not know where this matter is going to end. “There are no alert mechanisms for effective action. We are only a civil association, but the State is the one that must protect these children ”.

Several times the issue of the sale of girls has splashed on President Andrés Manuel López Obrador. A few months ago, this practice made a big splash in the media and was asked about it. He always responds that it is not something generalized, that the communities cannot be blamed and that these towns are full of values. The president visited Guerrero for a couple of days, but that was a matter, he said, that he had not come to discuss, because it was not the rule, but the exception. He declared that the spread of these forced marriages is due to “a campaign by those who do not know the communities or the cultures of the peoples.”

The Tlachinollan human rights association has been working in the mountains for years. He knows and defends the “cultural, moral and spiritual values” of those peoples that he praises as president. But they do not stop denouncing the sale of girls, an issue, they say, that has to end.